The Greater Houston Coin Club was founded in September 1955, the year known numismatically for the “double die” Lincoln Cent. GHCC was incorporated on June 14, 1971, and is a life member of the American Numismatic Association (ANA #24824) and the Texas Numismatic Association (TNA #C-7). The GHCC is a 501(c)(3) not-for-profit, public charitable organization with all proceeds used to promote the education and study of Numismatics.

The Greater Houston Coin Club is organized exclusively for educational purposes, and in the furtherance of this purpose, to promote the study of numismatics through educational and scientific means.

Visitors are welcome at the GHCC’s monthly meeting. If you are interested in what we do, or would like to try us out, or if you are from out of town and find you will be in Houston, then please plan on joining us for the evening. Put a penny in a slot – youth activity A view of the bourse floor YN Andrew Chipman had the experience of being a dealer for a day. Gail Brichford, longtime active member of the GHCC, recently celebrated a personal milestone. Gail was recognized for his 70 years of membership in the ANA. ANA President Jeff Garrett recognized Gail during the awards banquet held during the ANA convention in Denver. Gail was happy to have four club members present to share this memorable occasion. Youngest Ever Presenter at GHCC At the July meeting of the GHCC, Paul Robinson, who is 10 years old and going into fifth grade, very ably gave an educational presentation entitled “The New British Round Pound”.

Paul is the youngest YN to ever present at a club meeting. Paul began collecting at age five when his dad brought home some coins from England. His knowledge & enthusiasm were evident in his presentation. His main interest lies in the history & economic situations in which his coins were issued.

Paul also donated a round pound to the club auction. He asked that the proceeds be given to the Coins for A’s program.

The entire membership was impressed with Paul’s presentation, and his coin earned $20 for the CFA program.

Competitive exhibits had a big rebound from recent years with the new leadership of Judy and Gary Dobbins as Co-Chairs. Best of Show was won by John Barber of the GHCC with his “Seated Liberty – From First to Last” exhibit. The public also voted this exhibit as the most popular at the show.

At the same awards ceremony, the TNA leadership recognized GHCC member John Barber as its Governor of the Year for 2016. This award is based on educational efforts by the recipient in spreading numismatic knowledge by giving presentations around the state of Texas to coin clubs and non-numismatic organizations. 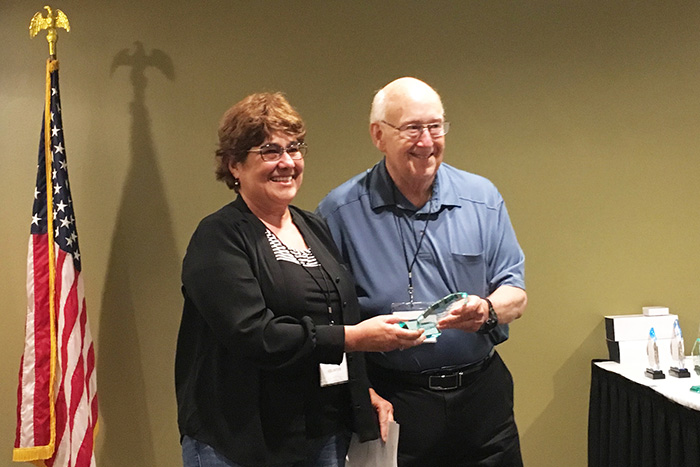 Coins in the Classroom

The 105 students in the combined fifth grades at Collins Intermediate came well-coached by teacher/coordinator Ms. Dana Smith and efficiently filled the center section of the library, allowing all to see the images from the installed large projector on a large screen. The 35-minute Power Point presentation was followed by general questions for 10 minutes, touching on coins already in students’ collections and some recent news reports on fresh discoveries of 1943 bronze Lincoln Cents. In order to check who had been listening well (almost all!), Mr. Barber gave an oral quiz composed of numismatic facts that had been showcased in the presentation. Students with the first right answer were rewarded with take-home coins based on the answers.

At the conclusion of the “Five Cents” presentation, Eve Barber took the floor to describe the GHCC’s Coins-for-As report card reward program. At the end of each marking period from third grade through high school graduation, students are encouraged to submit copies of their report card and in turn receive real collectible coins. Some students have been returning to the program for 10 years, with over 40 visits.

A copy of the new edition of A Guide Book of U.S. Coins (the Red book) was presented to the library to serve as a resource for interested students.

The GHCC sponsors the annual Houston Money Show, scheduled for January 19-20, 2018 at the Lone Star Convention Center in Conroe. It is the largest annual coin show in the Houston area, and we are looking forward to a successful 61st convention. President Jack Domurat (Left) presents a certificate to Gail Brichford honoring his 70th year as an ANA member. Gail will be formally honored by the ANA at its award banquet, which takes place during the upcoming World’s Fair of Money in Denver, Colorado. Mike Greenspan (below, left) presents Gail Brichford (below, right) with a permanent memento for winning the annual Francis Townsend Award. The Townsend Award is given annually to a club member or couple who distinguish themselves by providing outstanding service to numismatics and the GHCC.

In 2016, club member Ricardo de Leon Tallavas was chosen to represent his country and the Greater Houston Coin Club as a representative to the 1st International Convention of Historians and Numismatists. At our March 2017 meeting Ricardo gave a slide presentation of his travels during this historic trip to Bolivia. Ricardo recalled first hand how the local people greeted their group with warmth and a sense of celebration. Their arrival was well publicized, and they were met with celebration and welcome wherever they visited. Ricardo recalled his visit to the Mint of Potosí, which minted most of the silver shipped through the Spanish Main. Ricardo and his group were also fortunate to be able to visit the mines from which silver was extracted.

Assisting Ricardo during this presentation was club member David “Chuck” Bianchi, who provided history on several Potosí Mint coins and then displayed several of these coins for the membership to view.