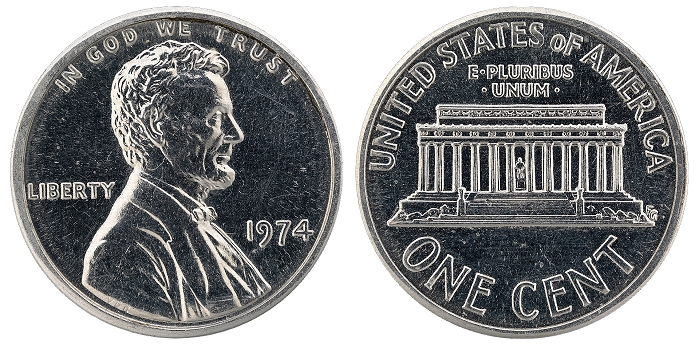 By Blanchard & Company ……
How do you run a successful business? You make sure that costs don’t exceed revenues. However, in a 2014 biennial report to Congress, the United States Mint explained that it takes 8.04 cents to make a nickel and 1.66 cents to make a penny. This imbalance between manufacturing costs and face value is a problem.

This challenge is not new. In 1973 the Mint had the same problem. They decided to explore solutions. The prevailing idea was to make pennies from aluminum. Specifically, they intended to make them from an alloy of aluminum and trace metals. This approach would replace the copper-zinc composition in the traditional one-cent coin.

Rising copper costs made the traditional 1973 penny nearly equal in cost to its face value. This brought the topic of seigniorage into the fold. Seigniorage is a word used to describe the difference between the face value of a piece of currency and the cost to manufacture and distribute the money. To avoid a model in which costs exceed face value, the U.S. Mint decided on an alloy consisting of 96% aluminum. Aluminum was less expensive, more durable, and resistant to tarnishing. Additionally, aluminum takes less of a toll on the die used to mint coins, which also brought manufacturing costs down.

The Mint went forward with its plan. They struck more than 1.5 million new aluminum pennies in 1973 for intended release in 1974. Opposition to the plan, however, was immediate. Leadership in the copper industry rebuked efforts to abandon the metal. Moreover, those in the vending machine industry became vocal about their concerns over the ability of machines to function with aluminum coins. There was an additional problem to all of this that no one foresaw: radiodensity.

Radiodensity is the inability of kinds of electromagnetic radiation to pass through a material. That is, pediatric radiologists cited the aluminum coins as a risk because they would be difficult to locate in an X-ray scan. An aluminum coin might be undetectable if a child ingested one. The coin might appear indistinguishable from human tissue on the images.

In time, the cost of copper declined. This, coupled with the growing voice of aluminum detractors left the initiative dead. The Mint recalled the aluminum coins. However, a small portioned were never returned, probably totalling 12 to 14 coins. These few pieces have remained hidden and unsold, therefore their value remains obscure.

However, in early 2014 a San Diego resident claimed to own a 1974-D aluminum coin. The “D” signifies that it was minted in Denver. The owner’s father was once a deputy superintendent of the Denver Mint. Some initial estimates put the value of the piece at $250,000 USD, with some suggesting that the value could reach as high as $2 million.

Later that year PCGS certified the coin as authentic. The owner planned to auction the piece. At the same time the U.S. Mint requested that the owner return the coin. The issue went before a judge, who said that “it is plausible that a Mint official, with proper authority and in an authorized manner, allowed Harry Lawrence to keep the 1974-D aluminum cent.”

Despite the ruling, the owner returned the coin to the Mint and the 1974 aluminum penny remains a footnote in the history of the U.S. Mint.