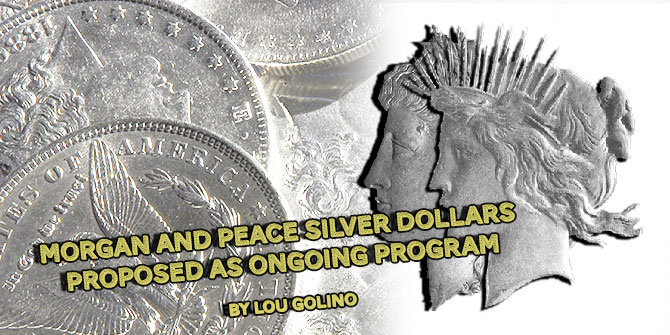 On March 11, U.S. Representative Garland “Andy” Barr (R-KY6) introduced H.R. 6192 – a bill which proposes the issuance of a silver dollar program starting in 2021 that would honor the centennial of the transition in 1921 from Morgan to Peace dollars.

Rep. Mark Amodei (R-NV2), whose district includes Carson City, was the first co-sponsor of the legislation. In fact, the bill already has significant bipartisan support, with 15 initial co-sponsors as of the day it was introduced (nine Republicans and six Democratics), and was referred to the House Committee on Financial Services on March 11.

Unlike the 1921 Morgan and Peace dollar commemorative coin program Rep. Barr proposed last year (H.R. 3757) along with Rep. Emanuel Cleaver (D-MO5), coins issued under the new program would not be commemoratives and could be issued on an ongoing basis rather than terminating at the end of 2021. The bill says the Secretary of the Treasury may begin minting the coins on January 1, 2021.

Silver dollars with designs that are “renditions of the designs historically used on the obverse and reverse” of the Morgan and Peace dollars would appear on the coins, which would be sold as numismatic items. The bill says the price of the coins would be “equal to the sum of their face value plus the cost of designing and issuing the coins (including labor, materials, dies, use of machinery, overhead expenses, marketing and shipping).”

As was the case with the 2019 commemorative program, the new one is being spearheaded with the support of Thomas Uram, President of the Pennsylvania Associations of Numismatists (PAN) and chairman of the Citizens Coinage Advisory Committee (CCAC), and numismatic author Michael Moran, who is also a member of the CCAC. Both men are working on the program in their individual capacity and not as members of the CCAC.

Tom and Mike spoke to me on March 11 and said that they are optimistic that congressional support for this legislation will be stronger than it was for H.R. 3757, which was introduced July 15 of last year and has 26 co-sponsors. Commemorative coin bills need the support of two-thirds of each congressional body to move forward.

But H.R. 6192, the new bill, does not need to meet that steep threshold and can be passed with a simple majority. However, as Mike explained, it does require that the Speaker of the House grant an exception to allow the bill to come to the House floor for a vote.

Tom noted of the potential passage of the bill and issuance of the new silver dollars — for which collectors have expressed strong interest since last summer — “it would give a big boost to the numismatic community to recognize this important anniversary.”

Both men also stressed that officials at the U.S. Mint have said they are “very interested in the program.” If enacted and especially if continued over a period of years, the program could become a significant success for the Mint and also a very popular program with collectors, given the huge ongoing appeal of the original silver dollars.

In addition, a limited number of Morgan dollars with “CC” privy marks for the Carson City Mint would be issued.

Mike explained the reason for doing this:

“The economics don’t work to actually strike the coins at Carson City and New Orleans. Using the mint marks while striking the coins elsewhere doesn’t work yet we want to recognize these former mints.”

Each coin will weigh 26.73 grams, have a diameter of 1.5 inches, “contain not less than 90 percent silver” and have a reeded edge. The coins would be legal tender as allowed under section 5103 of title 31 of the United States code.

In addition, each coin must have a denomination designated, an inscription for the year of issuance and inscriptions for the words “Liberty,” “In God We Trust,” “United States of America,” and “E Pluribus Unum”.

As always, designs will be reviewed by the CCAC and the Commission on Fine Arts (CFA) and then selected by the Secretary of the Treasury.

No details on specific numbers of coins to be minted are available yet. Nor are specifics as far as whether they will be issued with uncirculated and/or proof finishes, which will be determined later.

Tom and Mike placed particular emphasis on the need for the numismatic community to get behind this program. That means collectors should contact their members of congress and ask them to support the bill.

Starting last summer, the numismatic community, including the American Numismatic Association (ANA) and Pennsylvania Association of Numismatists, worked to support the similar commemorative coin program that was proposed.

The new legislation’s official title is “To require the Secretary of the Treasury to honor the 100th anniversary of completion of coinage of the “Morgan Dollar” and the 100th anniversary of commencement of coinage of the “Peace Dollar”, and for other purposes.” It includes some historical background on the Morgan and Peace dollar programs, their designs, why and when they were issued and includes key passages that explain how the transition in 1921 from the Morgan to Peace dollar “reflected a pivotal moment in American history. The Morgan silver dollar represents the country’s westward expansion and industrial development in the late 19th century. The Peace dollar symbolizes the country’s coming of age as an international power while recognizing the sacrifices made by her citizens in World War I and celebrating the victory and peace that ensured.”

The bill also notes: “These iconic silver dollars with vastly different representations of Lady Liberty and the American Eagle, reflect a changing of the guard in 1921 in the United States and therefore on the 100th anniversary must begin to be minted again to commemorate this significant evolution of American freedom.”

If you think silver Morgan and Peace Dollars starting in 2021 would be a great program, please contact your congressional representative and ask them to support H.R. 6192. The coins will never see the light of day unless many of us do this.

If do not know who your congressional representative is, or how to reach them, this information is available on www.house.gov. It is generally best to call and ask to speak to a member of the representative’s staff, rather than sending an e-mail since every member receives so many of those. You may also send a letter, but those are delayed due to security screening.