Have you ever heard of a 1984 Denver Prestige Collector’s Set?

I hadn’t either, but that’s exactly what coin dealer Harry Melvin at South Park Coins in Forney, Texas, had purchased for $18 some time back. He and his colleague Michael Hajny sent me photographs of this set, which at first glance looks similar to a 1984 Prestige Proof Set, with a few important differences.

“There was nothing made of it at first because it was thought to be a common 1984 Prestige Proof Set,” says Melvin. “When the sets were put up to be inventoried, it was noticed that the coins were uncirculated. I was going to break it apart to get the uncirculated coins out of it.” But then something caught his and Hajny’s eyes before they harvested the uncirculated coins from the Prestige Proof Set-style case.

He told me he showed the set to other dealers.

“None of them called it a put-together set either, after looking at it closer.”

I sent some of Melvin’s photos of the set and accompanying information about it to United States Mint Deputy Director of Corporate Communications Todd Martin, who promised to determine whether or not this was a government-issued set after more closely inspecting the dozen or so pictures.

In the meantime, I wondered if there was any way this set could be an official product of the United States Mint. A major addition was built at the Denver Mint around 1984. I momentarily theorized that, perhaps, this set may have been a special presentation piece for attendees of a groundbreaking ceremony. I noticed what appeared to be a 1984 United States uncirculated set “D” token, which was struck on a copper-plated zinc one-cent planchet and mounted in the center of the case insert. It was unusual to see a second cent-sized portal in a Prestige Proof Set case, but there was something else about this set that I just couldn’t put my finger on. I sent the photos to CoinWeek Editor Charles Morgan to get his take.

He noticed a sticker located on the edge of the set’s outer packaging, which reads “Denver Mint State OlymipiCollectorTM Dollar”. This is completely out of character for a United States Mint product. As for the phrasing “Mint State”? That’s private-market jargon for “uncirculated”. Then there is that trademarked “OlympiCollector” brand, which the United States Mint never used. But even that aside, there was something else that stood out about this set: that “D” mint token.

Charles saw what it was that was bugging me – the hole for the “D” mint token, which was located in between the four minor coins, was uncentered. This would not have happened if professional tooling was set up to create packaging for an official release. In addition, the plastic shell on Prestige Sets are frosted with clear lenses over the coins. The mint token was obscured by this frosting. He determined the Denver token portal was bored in the middle of the prestige set insert by someone outside of the Mint in a crude attempt to create a product that looked like an official U.S. Mint release.

Before long, Todd Martin sent me a reply. He and several of the Mint’s historians had investigated Melvin and Hajny’s photos and researched product records from 1984 to see if they could turn up any indication that the government had issued this curious set. Martin told me that despite all efforts they couldn’t find anything on this 1984 OlympiCollector set, and a copy of the 1984 Annual Report of the Director of the Mint further confirmed this.

So, if the United States Mint didn’t make this 1984 Mint State coin set, then who did?

I thought I could get to the bottom of it by looking up the owner of the apparent “TM” trademark symbol on the OlympiCollector sticker. However, after entering several variations of the name in the United States Patent and Trademark Office website search system, I couldn’t find anything on the name. Thorough searches on eBay and other online auction and aggregate sales sites turned up nothing, either.

At this point, I can’t conclusively determine who produced this 1984 Denver Prestige OlympiCollector Set. But after some research on their part, we know it wasn’t the Mint!

Any coin collector who’s perused more than a few hobby publications has seen advertisements for aftermarket coin sets. In most cases, they aren’t exactly advertised as government-packaged coin sets (which they certainly aren’t), but many of these sets look quite official – especially to the unassuming eye.

I recently picked up the January 14, 1969 issue of Numismatic News, and inside were no less than six offers for (then) late-date coin sets in aftermarket holders advertised as “Mint Sets” or “Uncirculated Sets”. One of these ads offers “1968 P-D-S U.S. Coin Uncirculated Year Sets” for $2.95. The set comes with 10 coins packaged in two separate, sealed polyethylene holders, in the style of traditional United States Mint Uncirculated Sets from 1959 through 1964.

In that same copy of Numismatic News is an advertisement for a “1968 B.U. Mint Set” of Canadian coins for $3.50, housed in a Capital Plastic multi-coin holder. It was an era when American coin collectors, recently deprived of traditional Proof and Mint Sets, 90-percent silver coinage and mintmarked coins, were looking to Canada to add some pizazz to their contemporary hobby pursuits. Another dealer advertised eight-coin 1968 Canadian coin sets (with 50-percent silver/copper and nickel versions of the dime and quarter) assembled in an aftermarket holder for $4.30. A couple years later, Bradshaw & Darlington and other dealers out of the UK began issuing “Farewell to £.S.D. Coinage”, which are sets of the last, pre-decimal era (1971-date) British coins, including the farthing, halfpenny, penny, threepence, sixpence, shilling, florin, half crown, and crown denominations. These were originally sold for around $10 each and are still popular these days. And while most of the coin sets were issued in hard plastic cases packaged with fancy inserts, none without the distinctive Royal Mint insignia is official.

In 1982 and ’83, when federal budget cuts forced the elimination of the United States Uncirculated Set, several private companies issued sets of uncirculated coins from the Philadelphia and Denver Mints. Krause Publications was one of the largest issuers of privately packaged 1982 and 1983 coin sets, each housed in cellophane packages similar in appearance to the official United States Mint uncirculated coin sets that had been issued from 1968 through 1981.

Do Aftermarket Coin Sets Have a Place in Numismatics?

For some hobbyists, there’s a seeming stigma attached to collecting aftermarket sets. Many turn up their noses at these privately produced coin sets because they aren’t in “official government packaging”. While some collectors avoid buying aftermarket coin sets, others enjoy purchasing these privately produced pieces because they offer coins that might otherwise be unaffordable if purchased in a government-issued set or difficult to find as single uncirculated coins. 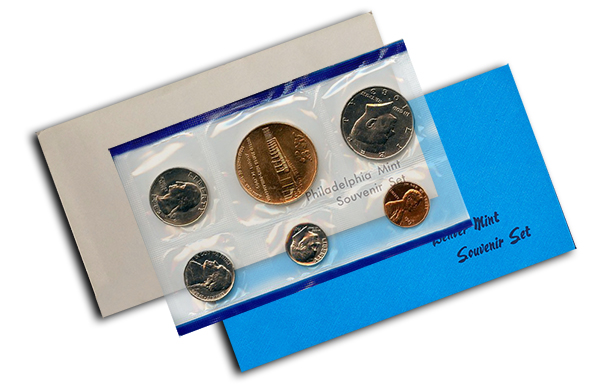 Take, for example, the 1982 and ’83 aftermarket sets, which filled a void left by the absence of official government-issued uncirculated sets during those two years. While the United States Mint did issue Philadelphia and Denver Souvenir Sets in 1982 and 1983 (each including a single uncirculated Lincoln cent, Jefferson nickel, Roosevelt dime, Washington quarter, Kennedy half dollar, and bronze token for the respective issuing Mint facility), they were made in very small numbers and were sold only at the Philadelphia and Denver Mint gift shops, respectively. Today, these sets sell for between $30 and $50 each.

Aftermarket coin sets, meanwhile, are generally worth only the collective value of the individual coins within. While most of these aftermarket sets have little numismatic value, they are often of great worth to collectors who may be looking for certain coins and can’t find them or otherwise afford them but through buying aftermarket coin sets.

As a passive fan of British coins, I bought one of those aforementioned “Farewell to £.S.D. coins” aftermarket sets for $9 from my local coin dealer, allowing me to add several uncirculated British modern types to my fledgling set of coins from the United Kingdom. Buying that coin set surely beat chasing those coins down individually, which would have been infeasible as few U.S. coin dealers regularly stock U.K. coinage in the form of modern uncirculated singles.

Regarding Melvin’s set, it was unfortunate for him that the 1984 OlympiCollector coin set wasn’t some type of rare official United States Mint product. But having bought the attractive set of six uncirculated coins and a Denver Mint token for $18, he certainly didn’t fare badly.

All things considered, aftermarket coin sets offer value to coin collectors, but hobbyists who specifically seek government-issued sets need to be wary of unintentionally buying private-issued sets. As in other areas of coin collecting, knowledge is key. The famous saying “buy the book before the coin” suggests that you research what you’re buying beforehand. As we’ve seen here, that maxim definitely applies even in the seemingly “safe” arena of buying modern-day coin products–including proof sets and uncirculated sets.

Coins have been marketed to less-knowledgeable non-collectors for years, and eventually these sets – many of them sold in general readership publications and on television – are turning up in numismatic circles as their original owners sell off their collections. You never know what will turn up!

I had never before seen a product like Melvin’s 1984 OlympiCollector coin set. For me it was a first-of-a-kind encounter. Who knows how many others were made?