Two hobby worlds–numismatics and videogames–collide on New Hampshire’s American Innovation $1 coins, rolls and bags of which are slated for release June 15

Ralph Baer is not only in the National Museum of American History, he is American history; his story is America’s story

Ralph Baer was born in Pirmasens, a small city in southwestern Germany, in 1922. He experienced antisemitic discrimination early in his life, being expelled from school in 1933 and forced to attend an all-Jewish campus. His family fled persecution by the Nazis two months before Kristallnacht in 1938, emigrating to America and settling in New York City.

Baer graduated from the National Radio Institute in 1940 and was drafted into the U.S. Army in 1943. He served as an intelligence officer, specializing in small arms.

He then graduated from the American Television Institute of Technology in 1949 and took a number of jobs with electronics firms. In 1951, he suggested that a game-playing feature be added to televisions, but his bosses weren’t interested.

In 1956, Baer took a position with Sanders Associates, a Nashua, New Hampshire-based defense contractor. Ten years later, in the Port Authority Bus Terminal in New York City, Baer says inspiration struck. He drafted a few pages outlining a “game box” that would allow people to play games on their televisions.

Many of his superiors at Sanders were skeptical, but he and two other engineers were given a $2,500 budget and a small workspace and set about creating the “Brown Box”, a video game console that was licensed to Magnavox and released as the Odyssey in 1972. The new technology proved deeply influential and was licensed to other firms; the Odyssey is widely regarded as the ancestor of present-day video game consoles.

In its obituary for Baer in 2014, the New York Times quoted video game historian Keith Feinstein, who called Baer’s work “the beginning of a revolution in thought.”

Baer received numerous awards for his groundbreaking work, including the National Medal of Technology, which he was awarded by President George W. Bush in 2006.

Baer’s achievements were not limited to the realm of video games. He designed consumer electronics and a number of electronic toys and games. He was admitted to the National Inventors Hall of Fame in 2010, receiving more than 150 patents over the course of his career.

Baer died in Manchester, NH at the age of 92. A statue honoring him was erected in Manchester’s Arms Park in 2019 and the surrounding area was renamed Baer Square.

An exhibit recreating Baer’s lab is set up in the Smithsonian right outside the numismatic exhibit. Baer’s documentary archive and hardware prototypes have been in the Smithsonian’s collections since 2006. The Smithsonian will create the Ralph H. Baer Endowment in 2022 to honor the centennial of his birth; according to the website of the Lemelson Center for the Study of Invention and Innovation, “funds generated by the Baer Endowment will support invention education through the Lemelson Center… at the National Museum of American History.”

The Lemelson Center’s Director Emeritus, Art Molella, described Baer’s significance: “Ralph Baer is not only in the National Museum of American History, he is American history; his story is America’s story.”

Design of the Coin

New Hampshire’s American Innovation Dollar honors Baer with a design depicting the game Handball. The Citizens Coinage Advisory Committee (CCAC) recommended the reverse design that the Treasury adopted at their March 11, 2020 meeting from a group of six proposed designs. Half of the designs used the digitized “handball” motif, while two of the others depicted the box or its controllers. One proposed design included Baer himself, playing Handball.

The Commission of Fine Arts (CFA), the other organization consulted by the Mint in the design selection process, recommended the design that includes Baer, an opinion shared by New Hampshire’s Governor Chris Sununu. 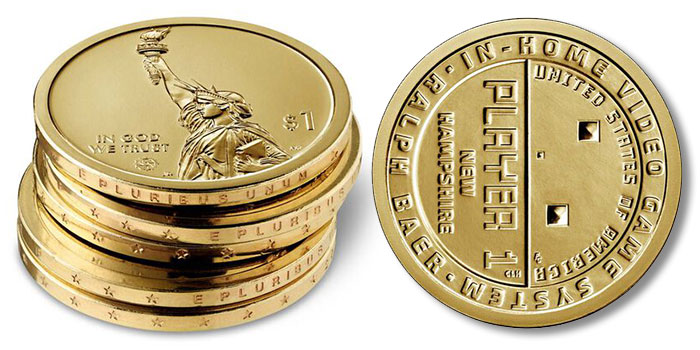 The Mint’s design narrative reads: “The reverse (tails) design depicts Ralph Baer’s brown box game ‘Handball’ on the right side of the coin. The left side features ‘NEW HAMPSHIRE’ and ‘PLAYER 1’ on an incused background. The inscriptions ‘IN-HOME VIDEO GAME SYSTEM’ and ‘RALPH BAER’ encircle the coin in a text that is meant to pay homage to Baer’s Odyssey game. The additional inscription is ‘UNITED STATES OF AMERICA.’ The design is also symbolic of an arcade token.”

The coin’s Manganese-Brass alloy is composed of 88.5 percent copper, 6 percent zinc, 3.5 percent manganese, and 2 percent nickel. The Mint will offer coins struck at the Philadelphia and Denver Mint facilities on June 15. 25-coin rolls are priced at $34.50, 100-coin bags at $117.50 USD. No product, mintage, or household ordering limits will be applied.

Governor Sununu said, according to the U.S. Mint’s press release announcing the designs, “Modern technology as we know it – stretching far beyond just video games – exists thanks to the advancements first imagined and made by Ralph Baer.”