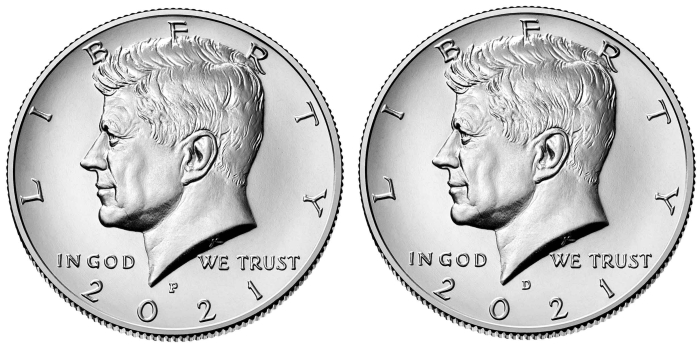 The 2021-P and 2021-D Kennedy half dollars are being distributed via circulation, marking the first time since 2001 that Kennedy halves have been fanned out to the public this way. All three images are courtesy the United States Mint The United States Mint facilities in Philadelphia and Denver are producing both 2021-P and 2021-D Kennedy half dollars for commerce, though exact numbers on how many have been made for these purposes have not yet been released. However, it marks a definite departure from the case of the past two decades, when business-strike half dollars were released only for use in special P-and-D roll sets offered directly from the U.S. Mint, United States Uncirculated Sets, and other products designed patently for coin collectors.

For now, the 2021-P and 2021-D Kennedy half dollars are appearing mainly in bank rolls being distributed through the Federal Reserve. Whether or not this new circulation pattern is a lead-up to a grander effort to get half dollars more widely circulating in channels of U.S. commerce remains to be seen. The question also lingers whether this is some type of collector-oriented initiative to spur interest in coin collecting, akin to efforts of similar intent with the limited-edition, circulation-only 2019-W and 2020-W West Point America The Beautiful quarters, which generated sizable interest both within the numismatic community and beyond.

Time will tell what this new half dollar arrangement between the Federal Reserve and United States Mint means, but it’s safe to say that collectors have something new to look for – at least when it comes to bank rolls. This also means new opportunities may come about for obtaining high-end Mint State Kennedy half dollars for PCGS Registry Sets and collections, including examples grading MS66, MS67, or potentially even higher.