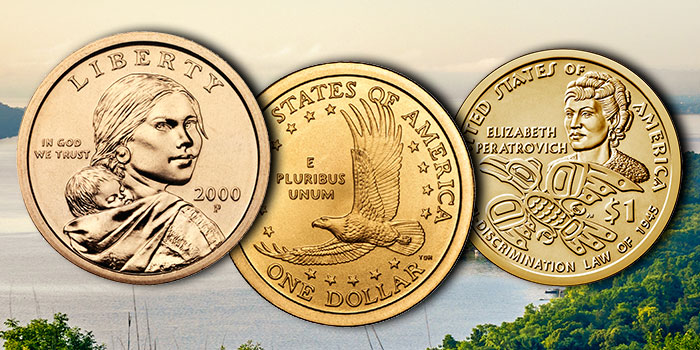 By Adrian Chacon and Joshua McMorrow-Hernandez for PCGS ……

Where have the last two decades years gone? It’s hard to believe that, 20 years ago, the United States Mint was releasing the long-awaited Sacagawea dollar.

Hailed by the U.S. Mint and many in the numismatic world as a pioneering coin, the Sacagawea dollar was long-anticipated by the public. It was the first time in a generation that a new small-size dollar coin had been issued for circulation, coming some two decades after the unsuccessful and very short run of the Susan B. Anthony dollar from 1979 through 1981. The Mint struck a batch of “Susie Bs” in 1999 to mitigate an increasing shortage of dollar coins, as the formerly unpopular Susan B. Anthony dollar had proven quite useful in vending machines and transit system networks.

But the new Sacagawea dollar was supposed to right all the numismatic “wrongs” the Susan B. Anthony dollar had suffered.

The “golden dollar”, as the public often calls the coin, is in so many respects quite different from its disco-era predecessor. This new dollar wowed many with its stunning three-quarter profile design of Sacagawea, the first Native American woman to grace the obverse of a circulating United States dollar coin. The coin was designed by Glenna Goodacre, whose artwork was chosen in a national competition and features a portrait of the Shoshone woman Sacagawea carrying her infant son, Jean-Baptiste (or “Pomp”). The reverse shows an eagle in flight and is designed by Mint engraver Thomas D. Rogers Sr.

However, the breakthroughs with the Sacagawea dollar didn’t stop at its fresh design. The coin was unlike anything the U.S. Mint had produced for circulation at the time, with its distinctive rim, plain edge, and distinctive golden color – the latter resulting from a clad composition consisting of a copper core and an outer layer of manganese brass. The new golden dollar coin was heavily marketed by the Mint in a series or print, radio, and television advertisements, as well as Mint partnerships with Walmart and General Mills, the makers of popular breakfast cereal Cheerios.

It’s been 20 years since this beautifully designed dollar was released. And while it didn’t see much circulation during the nine years it was produced from 2000 through 2008, it did stir up a lot of headlines.

In 1999, the U.S. Mint provided General Mills 5,500 Sacagawea dollars for a nationwide promotion. In 2005, numismatic author and journalist Tom Delorey discovered that some of these 5,500 Sacagawea dollars had a special detailed design on the reverse of the coin. This different design had detailed veins in the eagles’ tail feathers. After many years only several dozen examples were actually found. Who knows how many are still out there? But landing one is definitely an incredible find! The 2000-P “Wounded Eagle” Sacagawea dollar is so named because of a raised die flaw that cuts across the eagle’s belly on the reverse. Less than 300 examples have been certified by PCGS, with the majority grading MS64 through 66.

In May 2000, Frank Wallis from Arkansas discovered the first authentic mule known on a U.S. coin. The mule was a 2000-P Washington quarter obverse struck with a reverse of a Sacagawea dollar. Before the year 2000, no other mules on regular strike U.S. coins were known to be authentic. Over the years several other examples of the authentic mules have surfaced. Today, more than a dozen authentic examples have been verified to exist.

Unfortunately, the Sacagawea dollar didn’t prove successful with the public despite its historic design, unique color and metallic composition, and an incredible marketing campaign launched during the height of the 50 State Quarters frenzy in the early 2000s. Perhaps a major part of the problem came in the coin’s coexistence with the dollar bill, which was still produced during the launch of the Sacagawea dollar. That was a major reason the Susan B. Anthony dollar failed in the early 1980s.

Lessons could be learned from Canada, which introduced its golden-colored “Loonie” dollar coin in 1987 and removed the circulating dollar bill shortly thereafter. More than three decades on, the Loonie circulates with great success and has become a natural part of Canadian commerce. If any Canadians miss using the dollar bill today, it seems few know about such sentiments.

Will the United States ever see a successful run at a circulating small-size dollar coin? Stranger things have happened. And although the Mint has not struck dollar coins for circulation since 2011, hundreds of millions of Sacagawea dollars and other U.S. dollar coins sit in private banks and Treasury vaults, just waiting for the day that they can see the light of circulation and a warm public embrace.

That time may still come. But, for now, the Sacagawea dollar finds plenty of love with numismatists, who enjoy the coin and its many incredible varieties and errors two decades on.