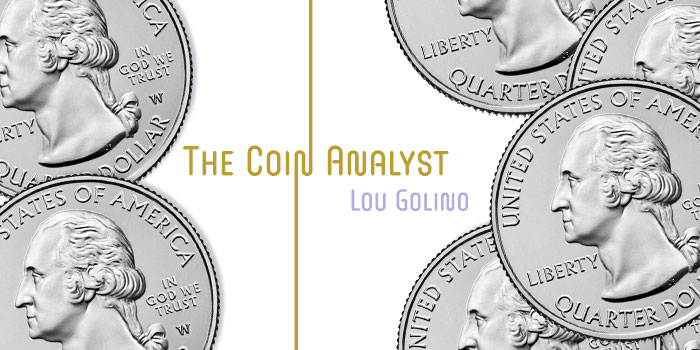 The Washington quarter has long been a staple of modern U.S. coin collecting, especially since it is one of those iconic series that many collectors started collecting from circulation — often at a young age. Collecting from circulation has a storied tradition in this country, especially among those old enough to have been alive when silver coins were still found in change.

Longtime collectors in many cases eventually grew tired of seeing the same designs on both sides year after year. That all changed (and collecting from circulation got a huge boost from 1999 to 2008) when the 50 State quarters – the first modern series with different reverse designs on each release — were issued and helped bring in millions of new collectors.

The successor to that series, the currently-issued America the Beautiful coins, have never been nearly as popular as the State quarters because they are harder to find in circulation, the designs have not resonated as strongly with collectors, and raw coins have almost no premium.

But this month, in conjunction with the U.S. Mint’s 227th anniversary and this year’s celebration of the American Numismatic Association’s (ANA) 96th annual National Coin Week, the Mint is for the first-time issuing quarters struck at the West Point Mint that carry a “W” mintmark. Quarters were issued by this mint from 1977 to 1979 but with no mintmarks.

What’s more, the coins are only available in circulation and the mintage of each 2019 quarter design with a “W” mintmark is limited to two million coins–about 1% of the anticipated total mintage of all 2019 quarters. While that might not seem rare or even scarce, in the context of modern circulation coins it is a low mintage and one that is comparable to some of the better-date Washington quarters.

The Mint undertook this initiative to stimulate greater interest in numismatics by encouraging people to look for “W” quarters in change. West Point mint-marked quarters were randomly mixed in at the Mint to bags of quarters from the Philadelphia and Denver Mints and then sent to the Federal Reserve, where they are being distributed to banks located in or near major cities around the country. This plan fulfills a promise made last October by Mint Director David Ryder at the Third Annual United States Mint Forum to put some rare coins into circulation.

The “W” quarter program began just before the start of National Coin Week 2019, which for the first time includes “The Great American Coin Hunt”, in which dealers and collectors around the country have dropped over a million valuable coins into circulation. The first two 2019-W Lowell National Historical Park quarters submitted on the same day to PCGS were from Michael T. of Fairfax, Virginia and Steven R. from Topeka, Kansas, who split the $5,000 prize from the grading company. While Michael’s coin was found in a roll, Steven’s was received in change. One of these coins, an MS66 Lowell piece, is for sale at GreatCollections.com with a current bid of $4,300 and three days left until the auction ends on Sunday, April 28.

The first Lowell coin sent to NGC was from Shawn Pyfrom, an actor.

In the weeks since the Mint announced this exciting program on April 2, hundreds of examples of the first “W”-quarter have been sold on eBay. As of April 24, there have been 864 completed sales of “W” Lowell coins, which have ranged from a high of $100 for the first coins sold to a low of $10 – clearly a case of the early bird getting the worm. Most recent sales have been around $25 per coin.

Ten graded examples of the Lowell coin have also been sold, including several PCGS MS64 coins that garnered between $280 and $450 and a PCGS MS65 coin that sold for $650. As of the time of writing, 167 coins are currently for sale on eBay.

The PCGS population report shows that 328 coins have been graded with the highest-graded being one MS67 coin; this includes the first two coins discovered and three from the first week of discovery. It is therefore highly likely that plenty more graded coins will be hitting the market in the future.

The second release, the 2019-W American Memorial Park coin, is now hitting the market with 32 sales on eBay since April 16, which ranged between $120 and $250 per coin. One graded PCGS MS64 specimen with a “First Week of Discovery” label is, at the time of writing, listed with a $350 start price and a $900 “Buy It Now” price.

The first Memorial Park coins sent to PCGS each came from Florida residents, including one MS64 and one MS65 example. Those submitters split the $2,000 PCGS prize for the first discovered examples of that issue. In the PCGS pop report, there are five Memorial Park quarters, including three graded MS64 and two graded MS65.

Because the coins are intended for circulation and each has a mintage of two million, the condition of the coin will likely be the key determinant of their value. Some collectors have wondered how a circulation coin can receive a mint state designation. The reason is that those coins are often not received in change but are found at banks in wrapped rolls. In fact, many of those who found the first coins are long-time roll searchers.

The market is clearly in flux for the “W’ quarters. Longtime collectors expected early sale prices, especially for raw coins, to start out high and continue to come down, which is what happened. And graded examples that receive mint state designations are certainly bringing in impressive sums, especially if they also have the pedigree of first-discovered coins and/or are the highest-graded examples so far.

At this point, it seems likely that ungraded examples of each release will eventually settle in somewhere around $10-20 per coin or less, but the market for graded examples is harder to predict since so few coins have been sold to date. The Lowell coin being sold at GreatCollections may well sell for a higher price than first-discovered examples of other issues simply because it was the very first of its kind.

The “W” quarters have mostly been received very enthusiastically by collectors – because of the positive impact they will have by bringing in new collectors, the excitement they are adding to the hobby, and the incentive they provide to look for something of value in circulation.

However, those who purchased raw coins for a fraction of what they are bringing a couple of weeks after their purchase, especially if they are new collectors, may suffer from buyer’s remorse. But at least they will have learned an important lesson: in most cases don’t chase the latest coin before its market value is clearer.

Some collectors have asked if dealers will somehow corner the market on these coins, but that does not seem possible given the way they are being randomly added to bags of P and D quarters. However, there is a risk that bank tellers or other bank employees who are aware of the program might cherrypick the coins, as Vic Mason, a collector from New York noted in the E-Sylum newsletter of the Numismatic Bibliomania Society (NBS) recently. Vic also noted that as the Mint continues to issue the 2019-W quarters, officials may develop other distribution methods to “dilute the next three “W” releases into a much larger used-coin population.”

It is my understanding that this is already happening. While the Mint randomly mixes the W coins with P and D quarters into Mint bags, by the time they are turned into wrapped-rolls that the Federal Reserve sends to banks, the 2019 coins are mixed in with other quarters of various years and series.

One longtime collector and numismatic observer who has collected from circulation for decades said he believes that even after the initial hype for the “W”-quarters dissipates, demand for examples grading MS66 and above should remain strong and that the coins will be seen in the future as semi-key date modern issues. He also noted that the mintage of the quarters is the lowest since the 1937-S Washington quarter, of which 1,652,000 coins were struck. When combined with the fact the coins will not be available in collector sets, even examples that are lightly-circulated should retain small but noticeable price premiums.

Overall, the West Point quarter program is arguably the best thing to happen to modern American numismatics since the State quarters, especially given the considerable mainstream media attention it has garnered, which was helped by timing it with National Coin Week. Whether the coins really do bring in new collectors who remain in the hobby and become interested in other series remains to be seen. But there is no denying these coins have been very beneficial for the hobby and given it a welcome jolt at a time when many observers remain concerned about the future of the numismatics in the U.S.