From Half Disme to Half Dime By Lianna Spurrier for CoinWeek …..
Quite a few denominations have been introduced and retired throughout our history, and while the half dime lives on in spirit through the nickel, the original small silver pieces are virtually unknown outside of the numismatic community. They tend to receive less attention than their larger counterparts, so let’s take a look at this small and intriguing coin.

The first half dime struck by the US was not called a half dime at all, but rather a half disme. In 1792, four different denominations of pattern coinage were produced, including the Bust half disme. While the other three denominations – the cent, the disme, and the quarter – were inarguably pattern issues, there has been debate about whether the half disme should be considered a pattern or a regular issue.

Over 1,500 pieces were minted, and most found their way into circulation. This comparatively high mintage has led to the common belief that they were circulation strikes, and they are more commonly included in sets of federal coinage than are the other 1792 issues.

They feature a design similar to the other patterns of 1792, with a portrait on the obverse (according to popular legend, this is intended to be Martha Washington) and the abbreviated legend “Liberty, Parent of Science & Industry”. The reverse has a small eagle with the legends “Uni. States of America” and “Half Disme,” with diagonally reeded edges. This was the only year that the word “disme” ever appeared on US coinage, and the “half dime” designation didn’t appear until years later. It is currently believed that William Russell Birch, a British medalist, designed and engraved the dies.

Today, Bust half dismes are very popular among collectors and command high prices. The lowest graded piece by PCGS is in AG03, which has a price guide value of $18,500 USD. The highest-graded piece is the Rittenhouse example, a vibrantly toned MS68 with a provenance going all the way back to when it was minted. It sold in 2007 for $1.5 million in a private transaction.

There is also one specimen example known, graded PCGS SP67. Proofs weren’t officially made until 1820, so earlier pieces that exhibit superb strikes and extra care taken in the minting process are generally categorized as specimens. This coin sold in 2014 for $1.3 million.

The first half dimes produced at the official US Mint facilities were the Flowing Hair half dimes from 1794 to 1795. Designed by Robert Scot, Chief Engraver from 1793 to 1823, the obverse has a portrait of Lady Liberty that is familiar to anyone who knows early US coinage. The reverse has the small eagle design, which was also seen across many denominations. They have no indication of denomination inscribed on the coin. The Mint had trouble striking these small silver coins, which is seen on surviving examples. Die breaks are common, and they are generally weakly struck with little detail in the center. Adjustment marks are also frequently seen, making it rare for a truly choice example to appear on the market.

With 14 different minor die varieties between the two dates, these can be collected by variety. But due to the expense and difficulty of doing so, they are usually collected as a type. For $2,000, a common variety of 1795 in F15 would be attainable. 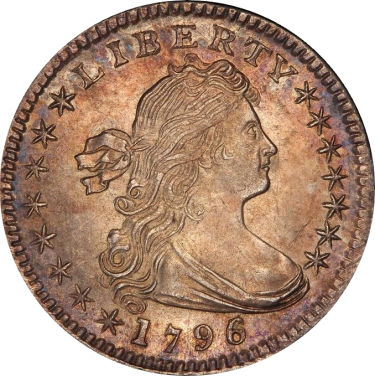 Between the two dates, there are five different major varieties. 1796 saw a misspelling of “Likerty”, and a mysterious 1796/5 overdate. Since this design wasn’t minted in 1795, there is some confusion about how the overdate came to be.

In 1797, they were first issued with 15 stars. When Tennessee joined the US, this was changed to 16 stars. However, the obverse was becoming rather crowded with so many stars, especially on the small half dime, and it was decided to keep 13 stars on coinage. As a result, pieces can be found from 1797 with all three numbers of stars, though the 15 star issues are most common.

Possibly even rarer with an estimated survival of only 30 pieces is the 1803 Small 8, though prices are much lower. The 1803 Large 8 is comparatively common, and in addition to an 1800 “Libekty” variety, are the only major varieties in the series. After a large break in half dime production, the Capped Bust half dime was released in 1829. Its design is very similar to that of the Capped Bust dime by John Reich, modified by William Kneass to fit the smaller coin. This is the first half dime since the 1793 Bust half disme to feature the denomination; the reverse includes the inscription “5 C”.

The design ran through 1837 with no gaps in production, major design changes, or key dates. There are multiple varieties for 1835, 1836, and 1837 based on the size of the date and denomination, but prices are fairly equal across the board. The series can be collected by die variety, and some of the minor varieties are harder to come by. This series included the legend “half dime” on the reverse, making it the only five-cent coin to bear the word “dime”. They were struck in Philadelphia, as all half dimes were up to this point, but were also produced in New Orleans from 1838 to 1860 and San Francisco from 1862 to 1873.

With plenty of additional scarce dates, a full date and mintmark set (omitting the 1870-S) would be a challenge. Common dates are fairly inexpensive – $2,000 would cover a high-MS example – but it’s a long series with many varieties, design changes, and key dates.

The Shield nickel was introduced in 1866, and in 1873 the silver half dime was permanently retired in favor of the larger and easier to handle nickel.