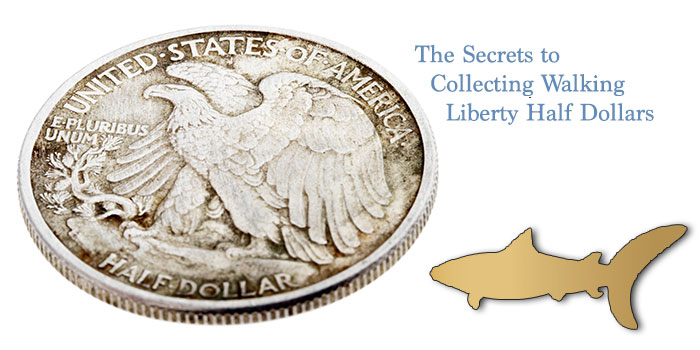 The Walking Liberty half dollar, issued for 31 years from 1916 to 1947 and which includes 65 date and mint mark coins, is probably the most popular 20th-century U.S. coin and the most widely collected half dollar series. It was produced during a remarkable period in American history that spanned two world wars, the Great Depression and the Roaring ’20s – a period of major economic disruption at home and growing U.S. involvement in world affairs.

Much of the coin’s appeal comes from the hopeful, patriotic motif of a confident Lady Liberty striding towards the sun and the dawn of new day, draped in an American flag and carrying laurel and oak branches that represent peace and strength, and its reverse featuring an eagle perched on a mountain crag. The design represented enduring American ideals and signified that while the U.S. had peaceful intentions, it was prepared to defend itself against aggression as war raged across Europe. The first coins were struck in 1916 but were released into circulation in January 1917; three months later the U.S. entered World War I. In terms of numismatic history, the coin was issued at a time when almost every denomination saw the debut of some of the most aesthetically appealing American coin designs ever. The Winged Liberty (Mercury) dime and the Standing Liberty quarter also debuted in 1916. And this was only three years after the start of the Buffalo nickel in 1913 and less than a decade after the launch of the Lincoln cent in 1909, not to mention the classic gold coins that debuted in 1907 and 1908 (the Saint-Gaudens and Indian Head coins).

With all these great new designs in the years that preceded it, numismatic leaders of the time wanted to see a better design on the half dollar than the Barber halves issued until 1915. The United States Mint initially had Chief Engraver Charles Barber and his assistant George T. Morgan prepare designs, but those were not well received, and after considering designs from several artists, the one of German-born sculptor Adolph Weinman was selected.

The design has such enduring popularity and resonates with so many collectors old enough to have seen them in change while growing up that in 1986 the Walking Liberty half dollar obverse was selected for the American Silver Eagle.

Coins from this series issued before 1934 are tough to find in uncirculated condition because not many people could afford to save them during the Great Depression, but by the mid-1940s the series was widely collected, and the coins remained in circulation until the ’60s. Interest in the series really took off in the late ’70s and early ’80s as the coin market strengthened, and this continued with the advent of third-party grading in 1986-87.

Today many collectors have sets of the Walking Liberty half dollar in either circulated or uncirculated condition. And some of the better dates and condition rarity coins that were much more expensive in the late 1980s and even a decade ago can be acquired at better prices today. This is mostly a result of the economic disruptions of recent years that forced some collectors to sell their coins.

Because there are no major rarities in the series, and only a few key date coins, it is possible to acquire a complete set of all 65 Walkers in circulated condition for under $2,000 USD. For the discerning collector, now is a great time to acquire the 1942 coin in MS68, the highest grade for the date and the series at a much lower price point than in the past.

The 1942 and 1943 coins are part of what is known as the Walker Short Set, which is the 20 coins issued from 1941 to 1947 that can be obtained in nice uncirculated condition without spending huge sums unless one seeks the very best examples, which are MS67 coins. When it comes to those super-grade issues, it is essential to look for well-struck examples and to cherrypick. The series is notorious for issues that come weakly struck in the hand and head of Miss Liberty (as well as the torso and left leg) on the obverse, and on the eagle’s breast on the reverse. This has a lot to do with the fact that those high points of the design of each side are opposite each other.

For the coins struck at San Francisco, this can be quite challenging but well worth the effort. The problem is that as demand for coinage rose during World War II, the San Francisco Mint had to prolong the use of coin dies, which resulted in many inferior quality pieces.

Another good value in today’s market for the serious collector is the 1943-S in MS67, the highest grade for this issue. A coin like this also has greater value and liquidity if it comes with the CAC (Certified Acceptance Corp.) green sticker.

The investment-minded collector should consider acquiring the 20 coins of the short set in either MS67 if they have the financial means, or in the much more affordable grade of MS66 and seek out a matched set with CAC stickers of well-struck, choice specimens.