Die varieties of early U.S. $5 Gold Half Eagles have been studied intently by some of the most respected numismatic researchers of all time.

By the early 1880s, John W. Haseltine and John Colvin Randall began systematically classifying early Half Eagles by noting the tiny differences in the punches used to impress the design elements into the dies, and the different placement of the design elements in relation to each other. Their work was refined and expanded in the early 20th century by Edgar Adams, William Woodin and Waldo Newcomer. More recently, scholars like Walter Breen, Harry Bass and John Dannreuther added their findings to the accumulated knowledge of early gold die varieties.

Last March, Heritage Auctions numismatist and cataloguer John W. Sculley joined this distinguished group by correctly identifying the overpunched denomination seen on the reverse of some rare 1818 and 1819 Capped Head Left Half Eagles.

Upon close inspection, Sculley noticed the “I” overpunch (below) on this 1818 BD-3 Half Eagle. 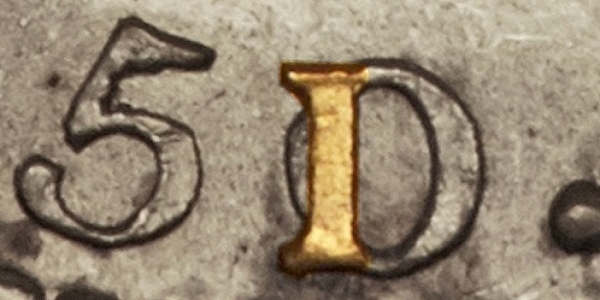 The dramatic overpunched reverse was first used to strike a very scarce variety of the 1818 Half Eagle (called BD-3 in John Dannreuther’s Early U.S. Gold Coin Varieties), and employed again to strike the even more elusive BD-1 variety in 1819. The blundered denomination was actually noticed at an early date, but its true nature was always misunderstood. H.P. Smith and David Proskey were the first numismatists to describe the blundered denomination in print in their description of the coin in lot 904 of their catalog of the Lorin G. Parmelee Collection (New York Coin & Stamp, June 1890):

The reverse die became known as the famous “5D over 50” reverse in all standard series references, and any student of the early Half Eagle series would recognize the nomenclature today. But the real alteration is something quite different.

In March 2017, when studying the MS63 PCGS 1818 BD-3 Half Eagle in the Hutchinson Collection, John Sculley noticed the obvious misnomer in the “5D over 50” notation — the 5 is obviously not repunched. Looking closer at the letter superimposed over the “0,” he discovered something much more surprising. The curve of the supposed “D” (for “Dollar”) was much too rounded at the bottom to have been made with the standard “D” punch used on other Half Eagles of that era.

It gradually became clear that the letter used to overpunch the errant “0” was actually an “I.” When carefully placed so that the serifs of the “I” blended with the curve of the underlying “0,” the missing upright was seamlessly added to create the optical illusion of a “D,” with just a tell-tale crescent of the original “0” visible to the left of the primary letter. This elegant die-sinking maneuver had successfully fooled numismatic scholars for the last 127 years, ever since the variety was first noticed. Researchers John Dannreuther and Ken Bressett, and die expert Ron Landis, confirmed Sculley’s find. Landis noted:

“My take is that the die-sinker originally used the O punch instead of the D. To correct the mistake, he just used the I punch to add in the stem of the D, instead of trying to make the D punch work — which would most likely have caused some messy doubling. Quite a clever fix that saved them from scrapping the entire die.”

The surprising new information was reported in a front-page article of the March 13, 2017, edition of Coin World, and in the description of the 1818 BD-3 Half Eagle in lot 4250 of the Hutchinson Collection, Part II (Heritage Auctions, April 2017). This important reverse die should be known as the “I over 0” reverse in all future references.