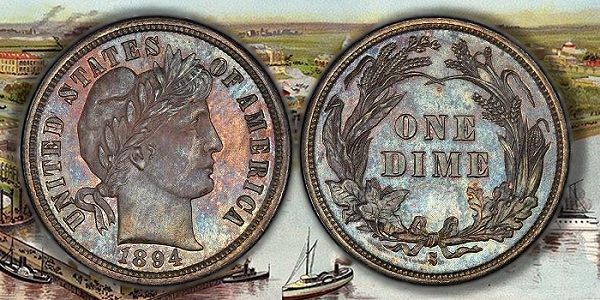 Barber dimes were minted from 1892 through 1916 and struck at four different mints.

In 1894, however, the San Francisco Mint struck only 24 Barber dimes, which have become one of the most sought-after, mysterious, and prized rarities in U.S. numismatic history.

Serious collectors can only dream of owning an 1894-S Barber dime. They rarely surface for sale, and when they do, the price is out of reach for most.

There are several stories explaining the tiny mintage.

As the most popular story goes, San Francisco Mint Superintendent John Daggett chose to strike a few dimes of the current date for banker friends who heard there would be no dimes struck that year.

Then, after Mr. Daggett struck the dimes, he gave three of them to his daughter Hallie telling her to save them until she was as old as he was as they would become quite valuable someday.

Sadly, children sometimes fail to heed the advice of their parents.

It was a hot day and young Hallie could not resist stopping at an ice cream shop on the way home from the Mint and spending one of her brand-new dimes. She did save the other two for many years until she sold them in the 1950s.

Other theories have been advanced as to why the mint struck only 24. While no one will likely ever really know the truth, the fact is whenever one surfaces for sale, wealthy collectors leap at the opportunity.

Another theory to explain the limited mintage is that the San Francisco Mint’s annual audit revealed a discrepancy of $2.40, so the 24 dimes were struck to compensate for this before the fiscal year ended on June 30.

Yet another theory suggests the 1894-S dimes were struck to test the dies.

Lastly, another account suggests that over the course of 1894, the Mint received a large sum in dimes, leaving the San Francisco Mint well supplied in dimes on hand and thus with no plan to strike any dimes that year. However, after nearly all of the coin bullion had been utilized, the Mint had a small amount that could only be coined into dimes. Thus, the mint struck only 24 of them that year.

The Barber dime is a classic American coin. It is part of a collection of dimes, quarter and half dollars, which all bear the signature of Charles E. Barber, the Chief Engraver. Known as the “King of the Mint” until his death in 1917, he set the tone for all of America’s turn-of-the-century coinage.

Notably, his coin designs are considered to be some of the most inspiring in all of U.S coin history. Barber’s designs reflected the end of a great age in American coin art.

The Barber coin series in many ways represented America as it developed into a world power at the end of the 19th and beginning of the 20th century.

Barber dimes are composed of 90 percent silver and 10 percent copper.

Many of the Barber coins were melted down into bullion amid an increase in the price of silver in the late 1970s and early ’80s. They were produced at four branch mints: Philadelphia, Denver, New Orleans, and San Francisco.