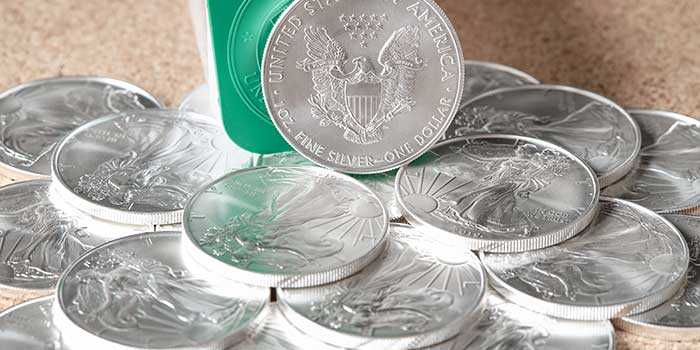 Many Americans have sought to hedge against high rates of inflation by acquiring hard assets, including gold and silver. Overall market demand for bullion coins, bars, and rounds has risen to higher levels than seen in recent years, if not ever.

Most gold and silver bullion forms do not carry much markup (also known as “premium”) over the actual market value of the metal itself, thereby enabling investors to acquire more precious metal for each dollar they invest.

However, this has not been the case with the Silver American Eagle since 2020.

“[T]he [Treasury] Secretary shall mint and issue, in qualities and quantities that the Secretary determines are sufficient to meet public demand coins which— (1) are 40.6 millimeters in diameter and weight 31.103 grams; (2) contain .999 fine silver; (3) have a design— (A) symbolic of Liberty on the obverse side; and (B) of an eagle on the reverse side.”

But, as Mooney pointed out, the U.S. Mint has only made 11.6 million ounces of the silver bullion coin available to the public through July 2022 – barely half of what has been supplied through the first seven months of prior years when demand has been similarly strong.

“This shortage in U.S. Mint production has apparently led to extremely high market-based premiums on Silver Eagles (as high as 70% over the silver melt value) – even as comparable items produced by other sovereign mints and private mints were not beset by such shortages or historically high premiums,” Mooney wrote.

“The high costs resulting from the U.S. Mint production shortage directly harm U.S. citizens wishing to avail themselves of a U.S. legal tender means of protecting their financial security from the effects of inflation.”

Rep. Mooney is demanding Yellen and Gibson provide answers to the following questions:

1. Does the Secretary believe the Silver American Eagle coin is being produced in “qualities and quantities that … are sufficient to meet public demand”?

2. Why is only a single supplier currently allowed to (or willing to) provide the U.S. Mint with silver blanks for its Silver Eagle program?

3. Given its statutory mandate to amply supply these coins to the public, why doesn’t the U.S. Mint have a policy to build a reserve of silver blanks during periods of slower demand in order to create a buffer for periods of higher demand?

4. Has the U.S. Mint examined the practices of other sovereign mints – such as Britain’s Royal Mint, Australia’s Perth Mint, the Austrian Mint, or the Royal Canadian Mint – to learn from their relative success in meeting high public demand for their own silver coins? If so, what were the resulting findings or recommendations?

5. What actions are currently being undertaken to address the Mint’s production problems (which reportedly extend beyond the Silver American Eagle coin program) and when will the U.S. Mint once again be able to fulfill its mandate to meet public demand?

“We are thankful that Rep. Mooney is seeking accountability for the chronic mismanagement plaguing U.S. Mint operations – and the resulting costs and frustrations it imposes on new silver investors as well as the precious metals industry at large,” said Stefan Gleason of Money Metals Exchange and President of the Sound Money Defense League.

A copy of Rep. Mooney’s letter can be accessed here.