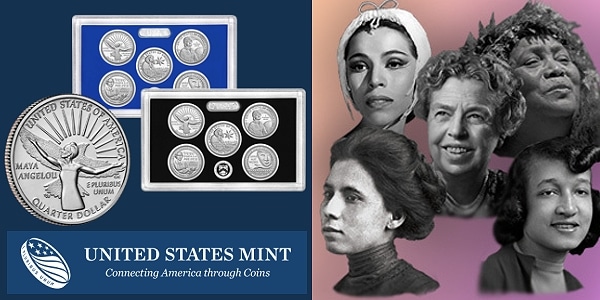 The United States Mint is pleased to announce the following 2023 honorees for the American Women Quarters Program:

“The range of accomplishments and experiences of these extraordinary women speak to the contributions women have always made in the history of our country,” said Mint Deputy Director Ventris C. Gibson. “I am proud that the Mint continues to connect America through coins by honoring these pioneering women and their groundbreaking contributions to our society.”

Authorized by Public Law 116-330—the Circulating Collectible Coin Redesign Act of 2020—the American Women Quarters Program features coins with reverse designs emblematic of the accomplishments and contributions of prominent American women. Contributions come from a wide spectrum of fields including, but not limited to, suffrage, civil rights, abolition, government, humanities, science, space, and the arts. The women honored come from ethnically, racially, and geographically diverse backgrounds. As required by public law, no living person will be featured in the coin designs, and thus all the women honored must be deceased. The Mint is issuing five coins with different reverse designs annually over the four-year period from 2022 through 2025.

The obverse depicts a portrait of George Washington originally composed and sculpted by Laura Gardin Fraser to mark George Washington’s 200th birthday. Though her work was a recommended design for the 1932 quarter, then-Treasury Secretary Andrew Mellon ultimately selected the now-familiar John Flanagan design.

The obverse design is common to all quarters issued in the series. Inscriptions are “LIBERTY,” “IN GOD WE TRUST,” and “2023.”

As stipulated by public law, the Secretary of the Treasury selects the women to be honored following consultation with the Smithsonian Institution’s American Women’s History Initiative, the National Women’s History Museum, and the Congressional Bipartisan Women’s Caucus.