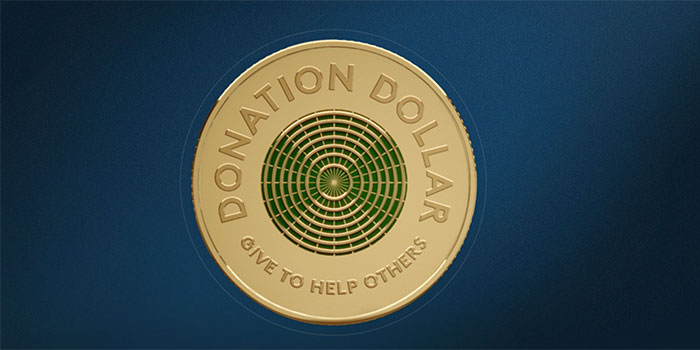 With $6 million coins currently in circulation, The Royal Australian Mint is urging Aussies to check their change, pockets, and coin jars to find a Donation Dollar and donate

Since its 2020 launch, the Mint has released an impressive six million Donation Dollar coins into circulation, with over 2.9 million Aussies reporting* to have found one in their change. The goal is to continue circulating Donation Dollars until 25 million are released, including an additional $5m to be released this year. If every Australian donated a Donation Dollar just once a month, it has the potential to raise an additional $300 million AUD annually for those who need it most.

New research released from the Mint has revealed that over half of Aussies (63%)* who have found a Donation Dollar coin proceeded to donate the coin, resulting in an estimated $1.9 million donated* to charities and people or businesses in need.

Assistant Minister for Competition, Charities, and Treasury, the Hon. Dr. Andrew Leigh, says this initiative aligns nicely with the Government’s goal to increase giving by 2030:

“Australians are naturally generous, but sometimes in our busy lives, charities can be forgotten. The Donation Dollar is a tangible reminder of the importance of giving back. These coins make that ask: if you find one, donate it, and if that feels good, then take the next step in supporting Australia’s community builders.

“The Albanese Labor Government has an ambitious agenda to rebuild and reconnect communities. After decades in which rates of joining, volunteering, and participating have waned, we want to build a stronger sense of civic society.

“The Australian Government has set a goal to double philanthropic giving by 2030 and to strengthen the community sector. By donating to support local charities, each of us can help shape Australia into a fairer and more connected country.”

The innovative concept has remained a much-needed helping hand throughout the ongoing global pandemic and the resulting financial pressures. There are various ways in which Australians choose to donate their coins such as giving to charity (19%)*, a homeless person (19%)*, someone in need (14%)* or giving to a struggling business (11%)*.

Research has found the preference for cash rose throughout the COVID and lockdown period**. This has resulted in an increase in Donation Dollar circulation, therefore the opportunity for Australians to give to those in need is more prevalent than ever – not just in times of crisis, but all year round, in smaller amounts, more often.

“We know through our findings that the more aware Australians are of the Donation Dollar the more likely they are to go out, find one and donate one*. Which is why we are reminding Australians of the potential positive impact. Like any other one-dollar coin, the cycle of a Donation Dollar is ongoing. So, with Australia’s support, we believe Donation Dollar has the power to make a real difference.

“The power lies in the hands of the receiver to decide where their coin will make the most impact. For example, they can donate it to their charity of choice, to a struggling business, or to anyone in need.”

Charities can find out how they can benefit from Donation Dollar by visiting www.donationdollar.com.au. Australian businesses can show their support for the initiative by downloading “accepted here” signage from the website.

** Future of Cash, Kantar, 2021commissioned by the Royal Australian Mint.