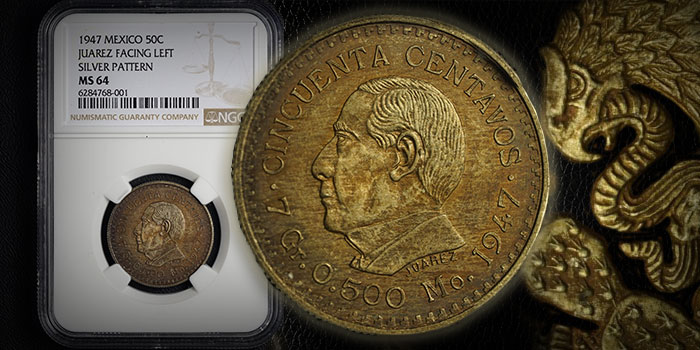 A coin collector and part-time dealer named Adrian Coro, who specializes in circulating Mexican coinage, recently made the find of a lifetime when he came across a Mexican 1947 silver 50 centavos coin that numismatists did not think even existed.

The piece is so rare that officials from the Banco de Mexico, which oversees the mint, said they have never seen an example, and it is not part of their legendary collection of Mexican coins that rivals the Smithsonian’s collection of American coins in its completeness. The piece is believed to be what collectors like to call “one of one”, or unique.

After purchasing it as part of a large collection of Mexican coins from someone who had been a serious collector from the 1950s to the ’70s, Coro submitted it to NGC for grading while attending the FUN Show in January 2022.

When it came back, NGC said it was a silver pattern piece that grades MS64 and noted the left-facing bust of 19th-century Mexican political leader Benito Juarez on the coin’s reverse. There are also inscriptions for “50 Centavos”; “7 gr.” for “7 grams”; “0.500”, the silver fineness; “Mo” for “Mexico”; and “1947”.

The coin’s obverse features the famous Mexican national emblem design that shows a large eagle with an arched neck and a rattlesnake in its beak and talons sitting on top of a cactus with branches of oak and laurel below. There is an inscription in Spanish that translates as “United States of Mexico”.

A friend of Coro’s — a dealer who sells Mexican coins — contacted the Casa de Moneda on his behalf to try to learn more about the coin and received a response that, in abbreviated form, states that a decree (the Spanish equivalent of law) of September 19, 1947, called for the issuance of a “silver coin with the characteristics of the image [of Coro’s coin] was published. However, the fifty-centavos coins were not put into circulation.” 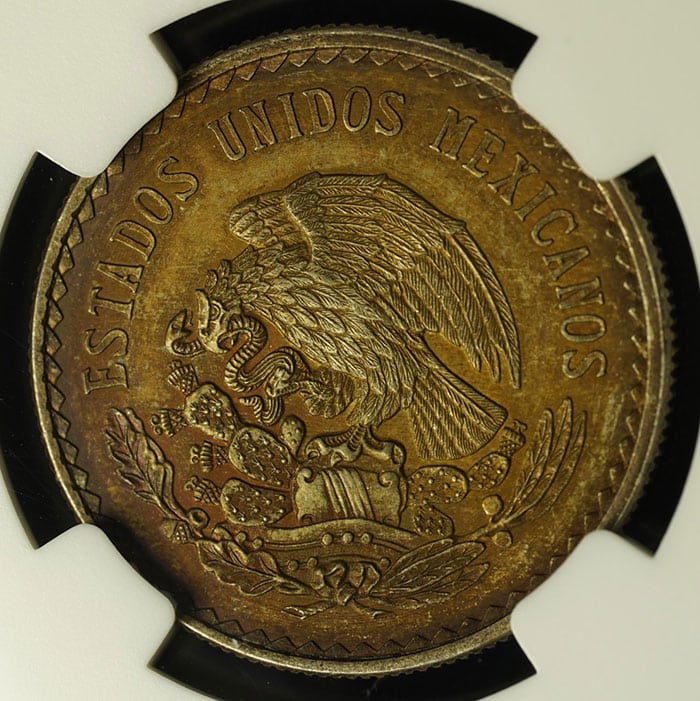 In addition, they found two books on Mexican coinage that describe “only pieces of five and one pesos were minted, and their issuance began shortly after the corresponding decree was promulgated.” They also noted the inscription “Juarez” that appears on the shoulder of his portrait, which, due to the heavy toning on the coin and the quality of the image sent, they thought was handwritten but Coro stresses that it is engraved.

A check of the Krause Standard Catalog of World Coins, 1901 to 2000 turns up a similar pattern – a 1 Peso silver coin from 1947 that is described as having the same design combination as the piece in question that is valued at $2,600 in the 2015 edition. But there is no reference to a 50 Centavos silver pattern from 1947 with that design. The only pattern 50 Centavos from this period is from 1945, but that one was made of copper-nickel and valued at $1,350 in the same edition.

The piece is also not found in the NGC online World Coin Price Guide, nor is it listed on the PCGS site under Mexican pattern coinage.

Also, in 1957 a 1 Peso .100 silver coin with almost an identical design on both sides was issued to mark the centennial of the 1857 Mexican Constitution. It features the same portrait of Juarez but without his name inscribed below as on the 1947 50 centavos silver pattern with .500 fineness.

In the period since the Mexican coinage reform of 1905, the two workhorse silver coins — the ones most widely used in commerce — were the 50 Centavos and Peso issues. Those coins were all the more important since, as Coro notes, “Mexicans do not like paper currency” — a sentiment that is not surprising in a country that is the world’s largest silver producer and one that many Americans would agree with, especially those who lived through the 19th century.

Over that long period the Mexican Mint, or Casa de Moneda, would continue to debase its silver coinage by reducing the silver fineness or weight of its coins.

That happened in response to changing economic conditions, especially rising inflation and the decline in economic activity that followed World War II when Mexican firms were busy cranking out material goods the U.S. needed for the war effort.

The use of this type of silver in coinage is part of a much broader development that has existed since ancient times: currency debasement. Debasement, which can mean using coins with less precious metal content or lower silver fineness than their predecessors, or the replacement of precious metal coins with coins made of base metal, is an age-old method used by governments to address the erosion in purchasing power of their currencies as well as to mask bad government policy. It’s a way of making citizens pay for a government’s excessive spending and fiscal mismanagement.

In Mexico’s case, the Peso was one of the more stable currencies in the 20th century, and the country did not at that time experience the hyperinflation seen in Latin America. That all changed after the oil crises of the 1970s, and in 1982 the country defaulted on its external debt, which started a prolonged period of capital flight from the country.

Given that background, it is not surprising that Coro thinks the extensive debasement of Mexican silver coinage was likely due to the rising cost of producing the coins. He also believes that the reason the 50 Centavos of .500 silver authorized by that 1947 decree was never put into circulation is that the denomination had been minted in the tens of millions in the preceding years, and there was little need for more of those coins at the time.

On the other hand, there was a need for new Peso coins, which had been struck since 1947 in .500 fineness with an obverse portrait of José Maria Morelos, a Catholic priest who became a revolutionary rebel leader who led the War of Independence movement.

Coro grew up in Puerto Rico and Florida and began collecting coins with his father, a Cuban exile, at age six. After collecting the coins of Puerto Rico, he moved on to Mexican coins and is very close to finishing a complete set from 1905 to date. He calls himself “an old school” collector who is only interested in coins that circulated and does not collect silver Libertads, which he sees more as medals or perhaps bullion since they do not carry a denomination.

He believes that because his pattern – which, amazingly, he said had been “tossed aside” as nothing special when he found it in a large collection — has apparently never been seen before and because it could be unique, it is likely one of the rarest Mexican coins of at least the 20th century, if not further back.

He also noted that the portrait on the reverse of his pattern piece is “a little flat, while the eagle [on the obverse side] has great relief.”

In addition, he believes that the change to a new design with those two motifs – Juarez on the reverse and the national emblem on the obverse – was intended to make it clear that the silver fineness of the coin was being reduced from .720 to .500. Moreover, with no change from the Cap and Rays design on the 50 Centavos from 1905 all the way to 1945, it was also time for a change.

As for what he plans to do with the coin, he said he had received an offer from a Mexican collector to buy it sight unseen but instead plans to have it auctioned by Stack’s Bowers Galleries (see below for more information).

Apart from the monetary value of this piece–which is difficult to estimate since there are no truly comparable Mexican pattern coins–the piece clearly has great historic value. Its existence and why it was made help collectors and students of 20th-century Mexican coinage better understand the history of that coinage and the role silver debasement played in it.

The coin will be on display at: