Marianne is the national symbol of the Republic of France, a fusion of the personifications of Liberty and Reason. Born of the 18th-century Enlightenment, she has stood for Democracy at its best and, sometimes, at its worst.

She was conceived as a break from monarchic representational conventions. Which is only natural since her first appearance was on a 1789 medal honoring the storming of the Bastille, a Parisian fort used as a state prison. The Storming of the Bastille on July 14, 1789 is often considered the initial conflict of the French Revolution.

During the First Republic, established by the revolution in 1792, Marianne is portrayed in repose, but by the Reign of Terror in 1793, she is portrayed as a more violent, bare-breasted figure leading revolutionaries into battle. After the Terror, she loses some of her fearsomeness but a precedent for representing her dual nature had been set.

After the Napoleonic Era, in which she was used as a subversive symbol, came the Second Republic and the revolutionary year of 1848. This time the republic embraced both versions as needed: the bare-breasted militant wearing a Phrygian cap and a red corsage, and a more conservatively demeanored Marianne, whose notable features include rays of sunlight around her head–much like the Statue of Liberty, which was designed by the French sculptor Frédéric Auguste Bartholdi.

In 1849, she made her first appearance on a French postage stamp, as frequent a home for her as French coins and paper money.

Between the start of the Franco-Prussian War in 1870 and the Nazi occupation of France in 1940, the Third Republic made much use of Marianne as a symbol of the French nation. It was a time of rising nationalism in Europe, and many of the national symbols we associate with Western Europe have–if not their origins–then at least their “formalizations” born out of this period. The version of Marianne we are familiar with today is based on the main figure in Triumph of the Republic, a sculpture created by artist Aimé-Jules Dalou in 1899 and located at the Place de la Nation in Paris.

Perhaps one of the most influential portrayals of Marianne comes from this period: sculptor-engraver Oscar Roty’s design for La Semeuse (1897), otherwise known as The Sower, from which Adolph Weinman drew a heavy amount of inspiration for his Walking Liberty half dollar obverse design in 1916.

Then, in 1940, the Nazi war machine occupied the seat of government in Paris, along with the northern and western regions of the country. A southern district bordered on Spain, Italy, Switzerland and the Mediterranean Sea–known as Vichy France for its substitute capital in Vichy–was permitted for a time to administer itself, although it was subservient to the German regime.

After the liberation of France by Allied forces in 1944 and into the postwar period and beyond, there was less social and psychological need for such propaganda, and the French became less personally invested in such symbols even though Marianne continued to appear on coins and currency. She was the last person portrayed on the French franc before the changeover to euro coinage, and her effigy has appeared on the national side of different French euros since 1999.

In 2017, the Monnaie de Paris issued a series of three gold coins (along with a silver version) depicting Marianne as one of the classic symbols of France. The coins came in 500-, 1,000- and 5,000-euro denominations. Earlier gold coin series had featured the Gallic rooster, La Semeuse, and Hercules.

The obverse features a left-facing close-up profile of Marianne, wearing a Phrygian cap, an ancient symbol of freedom and liberty. Attached to the left side of the cap is a cockade, or rosette made of ribbons tied together around a center. Cockades as a political symbol predate the French Revolution but tricolored (red, white and blue) cockades were common during that period. She wears a crown of laurel in front and oak in the back. The word LIBERTÉ in superimposed over Marianne’s hair and neck in a light, cursive-looking font. The “L” can be seen transforming into a flying wing, which then transforms into the first bird in a series of birds that fly clockwise along the entire left side of the coin. The year 2017 is found behind Marianne’s head, and the entire design is surrounded by a repeating dot and dash pattern. 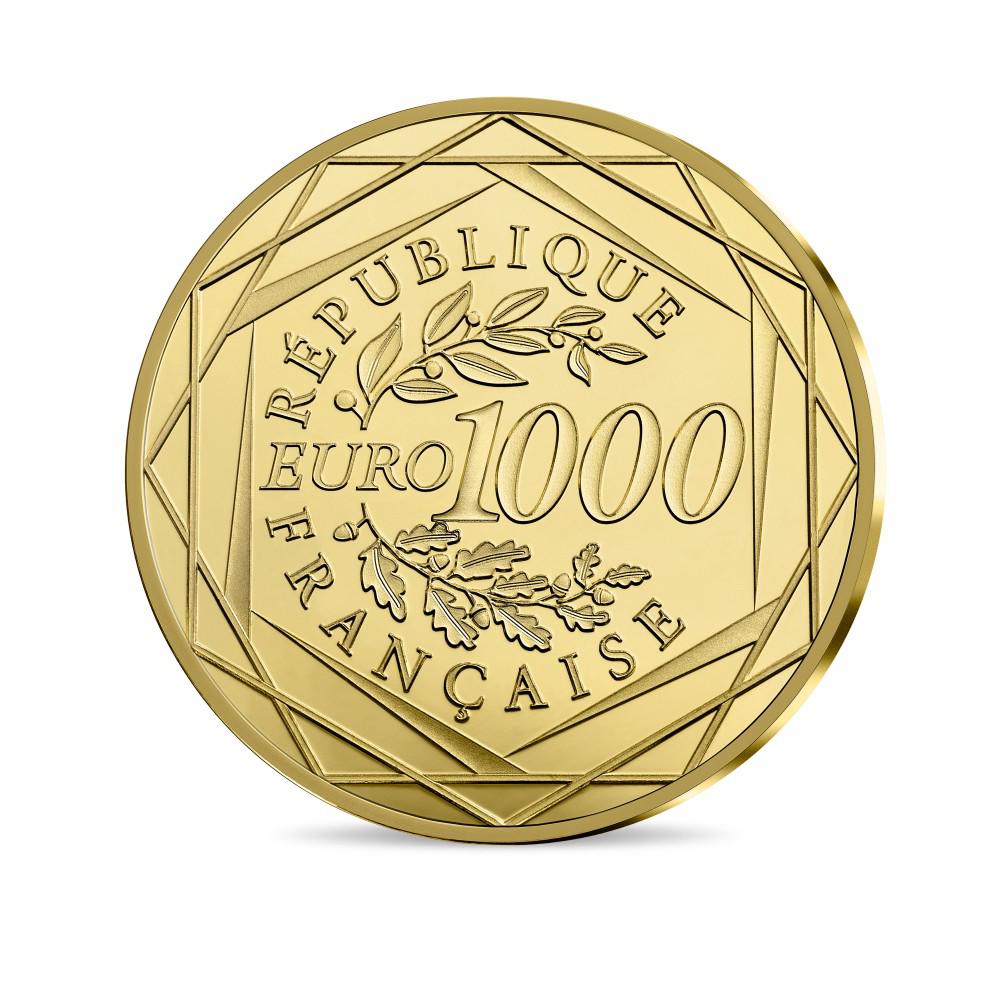 Inside the space of the inner hexagon is the inscription RÉPUBLIQUE FRANÇAISE, arched in a fashion resembling an upright letter “C”. Within the arched national legend is a wreath containing a laurel branch on top and an oak branch on the bottom (recalling the obverse), also forming a “C” shape. Oriented in a single, horizontal line of text is the denomination, EURO 1000. The national inscription, the wreath, and denomination are collectively situated to represent the € EURO symbol.