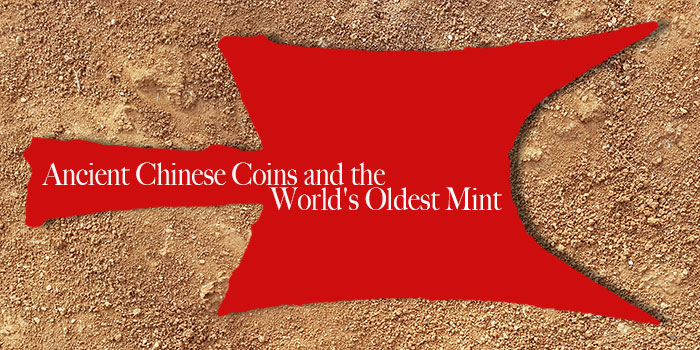 In early August 2021, Han Zhao and his team of Chinese archaeologists with the State University of Zhengzhou, announced that they had discovered the “world’s oldest coin mint”. Located near the city of Xingyang in the Henan province in central China, the physical archaeological evidence and radiocarbon dating places the facility’s minting operations to between 640 and 550 BCE. This was during China’s Spring and Autumn Period (770–476 BCE).

The facility began operations in 770 BCE, not with the production of coins but with the production of “valuable bronze, ceramic, jade and bone artifacts”, only shifting focus to striking coins around 640 BCE. Included in this change was a shift in religious thought. Most artifacts produced before the shift to casting spade coins were highly religious or ceremonial in nature; spade coinage was not. These coins were the early Hollow Handle Pointed Shoulder type. The foundry operated for almost the entirety of Guanzhuang City’s existence, from its founding in 800 BCE to its eventual abandonment after 450 BCE.

Zhao and his team determined the “absolute date” of the site by radiocarbon dating a series of “deposition units” or carbon-based deposits excavated from the center of the site. They selected carbon-based samples, mainly charcoal that was discarded in clearly stratified circular pits. Because carbon has a half-life of 5,732 years (meaning 50% of the carbon “decays” every 5,732 years), it is possible to calculate accurately the age of a sample under 50,000 years old. Once a sample reaches such an age, there is not enough carbon to measure accurately – though clearly, that was not a concern here.

Analysis revealed that the foundry was active from the Western Zhou period (1046–771 BCE) to the Chunqiu period (770–450 BCE) with a 95.4% probability rate. However, the archeologists also found pieces of “ceramic shards” from the Middle Chunqiu period (670–570 BCE) in all excavated pits containing specific evidence of coins and minting technology.

In an interview after excavations were conducted between 2017 and 2018, Zhao stated that “the discovery of the coins is not surprising, but the discovery of a coin mint is truly exciting as it shows the existence of a very old coin workshop.” Given that the number of operating mints in China was small in this period, the discovery of this facility helps give color to a previously little understood stage of numismatic history. Also, before the widespread adoption of coinage, the product of these few early mints was crude.

Zhao recognizes that the Guanzhuang coins are “not the oldest coins found in the world” but that this minting facility is the “oldest verified site of its type,” which is backed by “robust radiocarbon dates.”

While the Foundry was located within the outer city walls, it sat almost exactly on the inner-city moat in front of the Southern Gate of the inner city. This proximity to the regional political center is very important and indicates the value, both political and financial, the authorities placed upon this facility.

Beginning 2,600 years ago, cowrie shells and other proto money fell from favor as mediums of exchange in China, being replaced by cast bronze coinage. This new coinage required a very specific set of metal working tools, all of which were unearthed at the Guanzhuang site. As such, the state archeologists named the site “the foundry”. Within the foundry, the team unearthed a plethora of evidence, including “finished spade coins and their moulds,” as well as “two fragments of spade coins.” Unlike later casting trees for bronze Chinese cash coins, the mint workers used individual moulds to cast spade coins. These coins have hollow handles made by an internal clay core within the mold. The examples unearthed at this site are very interesting as they still include these clay cores.

While “the earliest spade coins” like the example below, and those found at the foundry, are quite plain and do not include any “surface patterns”, their design is sophisticated. In addition to the hexagonal hollow, there is even a raised “rim” around the outside edge of the entire coin to prevent clipping.

Since ancient China mastered bronze casting methods thousands of years before the first spade coin was produced, the casting process for the coins was highly specialized. Two halves of an outer mould were created using a wax or plaster original. Then a core was created to match a specific mould with core pins spaced precisely to not impede the flow of molten metal. This core created the hollow handle of the coin. The moneyers later stopped employing this method on later coins, and as such the authorities were able to produce many more coins without using the cores. The diagram below, produced by Zhao and his team, offers a clear visualization of this process.

Despite the poor condition and fragmentary nature of the two spade coins at the time of discovery in the foundry, it is possible to extrapolate the approximate size and weight of the pieces using fragments of the corresponding moulds.

By conducting a “compositional analysis” on the coins found at the Xingyang foundry, Zhao and his team found that the coins’ composition is 62.5% and 76.46% copper, respectively. This is interesting because the “average copper content of pointed shoulder space coins” unearthed in other local hoards is between 66.23% and 73.38%. These two discoveries push the outside limits of copper composition for this type by several percentage points in both directions. They should not, however, be considered outliers and are “consistent with … published examples” and do not denote any “evidence of debasement” via the inclusion of less valuable such as lead or other metals.

Since the team first began excavations around the foundry, over 6,000 clay moulds have been unearthed in varying states of preservation. The sheer number of moulds indicates a certain level of “mass-production” and extensive activity over a long period of time. Anthropologist Bill Maurer explained that both the high degree of standardization of the outer clay molds and inner cores and the physical proximity of the mint to the center of Guanzhuang’s administrative district strongly suggest that these coins (and money in general) “emerge[d] primarily as a political technology, not an economic technology.”

Additionally, the “secure” dating of the artifacts at the Guanzhuang foundry provides physical evidence which supports the assumption that “standardized coinage” emerged in China between 640 and 550 BCE and places it on par date-wise with the separate development of Western coinage.

However, it is important to note that as George Selgin, director of the Center for Monetary and Financial Alternatives at the Cato Institute states, this discovery “doesn’t change our basic understanding of when the first coins were produced. And it doesn’t necessarily mean that China did it first”. It simply colors in the picture of dates and the internal development of Chinese coinage.

Additionally, while being interviewed, several Western experts cautioned against overstating the perceived connection between the foundry and the local city administration. It is quite possible that local officials either sanctioned or tacitly approved of the production of spade coins in the foundry. While it “demonstrates … the routinization, the standardization, and the mass production of these items associated with a political center,” Zhao includes the small, yet important, caveat that “[p]olitical involvement in spade-coin production [remains an issue] for further research.”

It is unclear whether Zhao or another archeological team will be able to continue excavations at the foundry site in the near future.