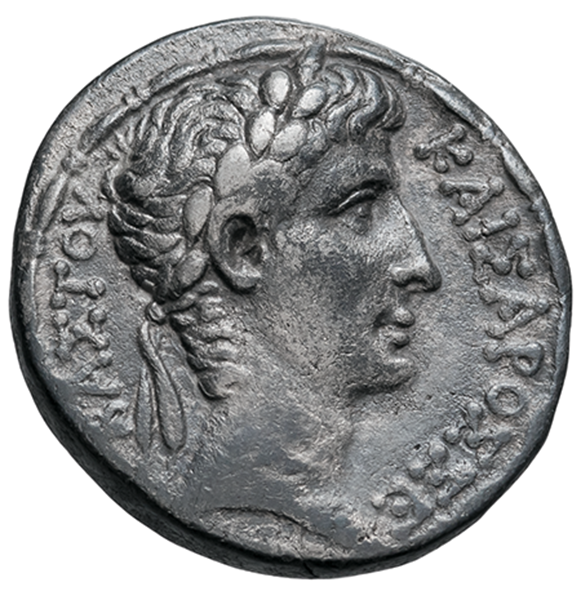 This tetradrachm (a silver four-drachmae coin), issued around the year 2 BCE, is from the Greco-Roman city of Antioch-on-the-Orontes in what is now southern Turkey. In 31 BCE, the forces of Octavian, great-nephew and adopted son of Julius Caesar, had defeated the forces of Marc Antony and Cleopatra at the Battle of Actium, one of the most famous naval battles in military history and the end of the last civil war of the Roman Republic. About four years later, the Senate would officially bestow the title “Augustus” upon Caesar Octavian, making him the first Roman emperor in 27 BCE.

By this time, use of the popular silver Greek trade coin was on the decline but still common enough to warrant an issue celebrating the victorious new ruler of Rome.

A laurel wreath, tied in back, adorns the head of Augustus (formerly Octavian), which faces right. The portrait is particularly fine, possessing such a level of detail that one can see how Augustus combed and parted his hair. Starting at about his forehead, the Greek inscription ΚΑΙΣΑΡΟΣ ΣΕΒΑΣΤΟV (“Kaisaros Sebastou” – “Caesar Augustus” in the equivalent Greek) runs clockwise around the head and neck of Augustus. A fillet border rings a little more than half of the top of the obverse.

The goddess Tyche is seated on a rock facing right. Tyche, known to the Romans as Fortuna, was the goddess of fortune or fate–with special adjudication over the fates of cities. She was especially revered in times of danger and instability. On coins, as in other media, she is easily identified by her murate crown, which looks like the fortified walls of a city. Her right arm is extended so that her right hand, which holds a large palm branch, is in the center of the reverse. A trait of Classical Greek and Hellenistic art, her dress hangs in such a way as to delineate the contours of her body and a good number of folds are present beneath her. Her feet seem to be resting upon the right shoulder of the River god Orontes, whose upper torso is visible above the waters of what is presumably his eponymous river. His body is positioned dynamically so that he appears to be swimming away from the rock and the seated goddess.

The Greek inscription ΕΤΟΩΣ Λ ΝΙΚΗΣ, referring to Augustus’ victory, is inscribed clockwise around the top half of the reverse, starting from behind Tyche. The monograms A/IΓ and ANT (the year of consulship and mint mark, respectively) are immediately under the palm. A bulleted border surrounds most of the top half of the design.