About the year 860, Riurik[1], a legendary Scandinavian adventurer, was invited by squabbling Slavic tribes around Novgorod to rule over them. His descendants established a dynasty that built a powerful state with its capital at Kyiv (Kiev) known to modern historians as Kievan Rus’[2].

Beginning about the year 1000, rare issues of Kievan Rus’ were the first Russian coins.

In the ninth and tenth centuries, the circulating coinage of Rus’ consisted largely of imported Islamic silver dirhams, particularly imitations of the coins of the Abbasid caliphate struck by the Khazars, a Turkic tribe that dominated the Volga steppes. Byzantine coins struck at Constantinople and Western European silver deniers have also been found in hoards across the region.

In 988, Prince Vladimir (Volodymyr in Ukrainian), ruler of Kiev, converted to Orthodox Christianity. Prior to this, the Rus’ ruling elite worshipped the Norse gods, and the Slavic population had their own pagan deities. Vladimir’s envoys had visited Constantinople and after attending a service in the famous Hagia Sophia cathedral they reported:

“We no longer knew whether we were in heaven or on earth nor such beauty, and we know not how to tell of it.”[3]

In 989 Vladimir married Anna, sister of the Byzantine emperor Basil II, a remarkable honor for a “barbarian” warlord. One of the most prized prerogatives of kingship was the minting of gold, and about the year 1000, Vladimir issued a series of gold zlatniki[4] modeled on the design of contemporary Byzantine coins. One side bears the image and name of Jesus Christ; the other side depicts the prince in imperial robes with the inscription in Old Church Slavonic: “Vladimir, and this is his gold.” A stylized bird-like “trident” (trizhub) appears in the field. The distinctive emblem of the Riurikid dynasty, it has become a national symbol of Ukraine.

Only 11 examples of this coin are known, all in Russian or Ukrainian museums. If an authentic new find ever appeared on the international coin market, it would probably become the object of a ferocious bidding war among Russian (and Ukrainian) oligarchs.

A few hundred examples of Vladimir’s silver srebrenniki[5] are known, in four different types. Struck in a brittle, poor-quality alloy, they are often found chipped or broken. Type I coins bear an image of the Prince on the reverse with the inscription “Vladimir on the throne”. The obverse shows a half-length figure of Christ, inscribed “Vladimir and this is his silver”. A typical example that brought $6,000 USD in 2018 was resold recently for only $2,800[6]. A similar piece went at auction in 2004 for $9,500 against an estimate of $10,000[7]. An exceptionally complete example of the rare Type IV with minor edge cracks brought £13,000 ($20,780) against an estimate of £8-12,000 in a 2013 London auction[8]. 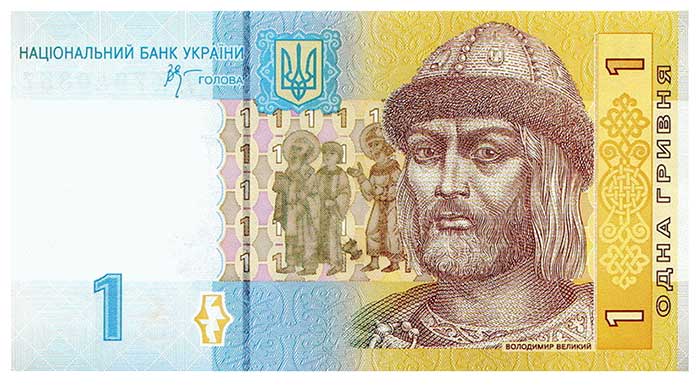 For his achievement in the Christianization of Russia, Prince Vladimir was made a saint of the Orthodox Church. A national hero for Russians and Ukrainians, his portrait appears on the modern Ukrainian 1 hryvnia banknote. An image of the zlatnik was reproduced on a Soviet 100-ruble gold piece issued in 1988 to commemorate the 1000th anniversary of Vladimir’s conversion.

When Vladimir died in 1015, his son Yaroslav was serving as vice-regent at Novgorod, far to the north. Yaroslav’s handsome coins are much better made and appear to be of better metal than other issues of Kievan Rus’. Only about 24 examples are known (Pritsak, 114); none have appeared in recent sales. The obverse design is a bust of St. George, copied from a Byzantine seal. The reverse bears a version of the dynastic emblem and the inscription “Yaroslav’s silver”. Known as “Yaroslav the Wise” (Yaroslav Mudriy), he ruled Kiev from 1019 to 1054. He arranged brilliant diplomatic marriages for his daughters: one became the queen of Hungary; another became queen of France; and a third became queen of Norway. Yaroslav’s portrait appears on the modern Ukrainian 2 hryvnia banknote, with an image of his coin in the background.

Known as “Sviatopolk the Accursed“[9] (Sviatopolk Okayanniy, sometimes translated as “the Damned”), he was probably the eldest son of Vladimir the Great. Upon the death of his father, he seized the throne and had his brothers, Boris and Gleb, murdered (they were later canonized as the first martyrs of the Russian Orthodox Church). Sviatopolk appears crowned and enthroned holding a cross-staff on his coins. The reverse is a two-pronged version of the dynastic emblem, with one prong ending in a cross.

In a recent European auction, a complete example of this type brought over $9,500[10]. A broken and pierced example (but with a clear portrait) brought over $7,400 in an earlier sale[11].

Grand Prince of Kiev from 1113 to 1125, Vladimir II Monomakh[12] was a grandson of Yaroslav the Wise. He adopted his surname from his mother, Anastasia, a relative of the Byzantine emperor Constantine IX Monomachos (ruled 1042 – 1055). He married Gytha of Wessex, daughter of Harold Godwinson, the last Anglo-Saxon king of England (KIA, 1066).

Vladimir was apparently the last ruler of Kievan Rus’ to issue coins. A worn and chipped example of his debased srebrennik brought $1,201 in a recent auction[13]. Vladimir appears on the obverse in imperial regalia on an elaborate seat inspired by the design of the throne of Christ on contemporary Byzantine coins. The reverse bears the dynastic trident emblem. A different type with a simpler obverse, but possibly in better silver, recently went for $1,300 against an estimate of $2,000[14].

The Principality of Tmutarakan was a remote outpost of Kievan Rus’, on the Black Sea coast across the Kerch Strait from Crimea. Rulers of this region issued crude lightweight imitations of the current Byzantine silver miliaresion of Basil II (ruled 976-1025). The obverse bears an elaborate cross between small busts of two rulers; the reverse is a long inscription in five lines. These imitative coins, struck by Mstislav Khrobry (“The Brave”, ruled 990-1024), are relatively common. A VF example brought $400 (against an estimate of 500) in a 2014 auction[15].

The 250 years after c. 1125 are known as the “Coinless Period” in Russian monetary history. No local coins were issued, and imports of foreign coinage dried up. The economy relied on a variety of silver ingots (known as grivna) and fur pelts as stores of value and means of exchange.

The standard reference work on this difficult coinage is Sotnikova and Spassky (1983) in Russian. It is out of print, but used copies can be found for about $200. An accessible English language reference, often cited by cataloguers, is Pritsak (1998).

[2] The apostrophe represents a soft “-y” sound that doesn’t exist in English.

Anderson, M.J. “The Coinage of the Grand Princes of Kiev”, Seaby Coin and Medal Bulletin (July 1963)

Pritsak, Omeljan. The Origin of the Old Rus’ Weights and Monetary System: Two Studies in Western Eurasian Metrology and Numismatics in the Seventh to Eleventh Centuries. Cambridge, MA (1998)