Oderint, dum metuant (Let them hate, so long as they fear). — Caligula

THE ANNALS OF THE ROMAN HISTORIAN TACITUS (56 – 117 CE) survived in one damaged medieval manuscript at the Monte Cassino monastery[1]. The section covering the reign of Emperor Caligula is missing, and we rely largely on fragmentary chapters of Cassius Dio’s Roman History (155-235 CE) and the Twelve Caesars of Suetonius (c.69 – 140 CE), a gossip writer who was the Perez Hilton[2] of Imperial Rome. There are few contemporary eyewitness sources – some passages in the writings of Seneca (4 BCE – 65 CE) and Philo of Alexandria (c. 25 BCE – 50 CE ).

The story is not a happy one. The future emperor was born on August 31 in the year 12, probably at Antium (Anzio) south of Rome. His father Germanicus, nephew of Emperor Tiberius, was a successful and popular general. His mother, Agrippina “the Elder”, was the daughter of Marcus Agrippa, the brilliant organizer who was largely responsible for Octavian’s victory in the Roman civil war (32-30 BCE).

“Caligula” is a nickname. It means “little boot”[3] in Latin, because as a child he wore a miniature military uniform including tiny hobnailed boots, much to the delight of his father’s veteran legionaries. He grew up to dislike it. His given name, which appears on his coins, variously abbreviated, was Gaius (or Caius) Julius Caesar Germanicus. “Caesar” here is not a title, but a personal name, inherited through Germanicus Julius Caesar, grandson of Emperor Augustus, the adopted son of the famous Julius Caesar (100 – 44 BCE).

“To make an inexperienced and almost unknown young man, brought up under a series of aged and repressive guardians, master of the world, almost literally overnight, on the sole recommendation that his father had been a thoroughly decent fellow was to court disaster in a quite irresponsible fashion.”
–Barrett, Caligula: The Corruption of Power (1990)

When the reclusive, miserly and increasingly paranoid Emperor Tiberius died on March 16, 37 CE at the age of 78, most Romans greeted Caligula’s accession joyfully. Caligula’s early coinage celebrates his descent from his great-grandfather, the deified Augustus[4].

Caligula’s laurel-crowned portrait appears on the obverse of his gold aurei and silver denarii surrounded by his titles. On one reverse, which bears no inscription, the head of Augustus, wearing the sun god’s spiky radiate crown, appears between two stars. Another type omits the stars and adds the inscription, “Divine Augustus, Father of the Nation”. On some examples, the portrait seems to have the features of the unpopular Tiberius, who was never deified by the Senate. Perhaps the mint engravers, who had copied and recopied the portrait of Tiberius for 22 years, automatically reproduced a familiar face.

On his birthday in the year 37, Caligula dedicated the Temple of Augustus, which had been under construction for over two decades in the Roman forum. The event is commemorated on a magnificent brass[5] sestertius. On the obverse a veiled seated figure is labeled PIETAS (“piety”) – an untranslatable Latin term for the Roman virtue that combined profound respect for ancestral traditions and meticulous observance of ritual obligations. The reverse shows Caligula in his role as Pontifex Maximus, high priest of the state religion, sacrificing an ox before a richly decorated temple. The finest known example of this coin sold for over $269,000 USD in a November 2013 Swiss auction[6]. The orderly succession and survival of any Roman emperor depended on the Praetorian Guard, an elite force of bodyguards stationed in the capital. It was organized into nine battalions, or “cohorts”, each of 500 to 1,000 men.

On his accession, one of Caligula’s first official acts was to present each guardsman with a thousand sestertii bequeathed by Tiberius in his will, adding another thousand of his own[7]. The reverse of a rare bronze sestertius, which may have been specially struck for this payment, shows Caligula standing on a platform with his arm raised in a formal gesture of greeting to a rank of guards. The abbreviated inscription ADLOCUT COH means “Address to the Cohorts”. Remarkably, this coin lacks the inscription SC (“by decree of the Senate”), which normally appeared on all Roman bronze coinage. An outstanding example of this type (“undoubtedly the finest specimen known”) brought over $634,000 in a 2014 European auction[8].

Caligula issued numerous types honoring the memory of his parents. Some of these continued under the reign of his uncle and successor, Claudius.

A handsome brass dupondius (worth half a sestertius or two asses) shows Germanicus riding in a chariot, celebrating his triumph (May 26, 17 CE) over German tribes. On the reverse, Germanicus stands in armor, holding an eagle-tipped scepter as a symbol of command. The inscription reads, “Standards Regained From the Defeated Germans”. This commemorates the return of sacred eagle standards captured when Roman legions of P. Quinctilius Varus were ambushed and annihilated eight years previously (September, 9 CE) in the Teutoburg Forest of north-central Germany. Examples of this type have sold for $500 to $3,000 in recent auctions. Agrippina the Elder, mother of Caligula, was honored on a bronze sestertius. The obverse inscription surrounding her strong, dignified portrait translates: “Agrippina, daughter of Marcus, mother of emperor Gaius Caesar”. On the reverse, the legend “To the Memory of Agrippina” appears beside a carpentum, a ceremonial cart drawn by two mules that paraded an image of Agrippina on special occasions.

Perhaps the best-known coin of Caligula is a rare sestertius that depicts his three sisters, Agrippina the Younger, Drusilla and Julia Livilla as the personifications of Securitas, Concordia and Fortuna respectively[10]. Caligula was close to his sisters, and lavished public honors on them in a way that shocked traditional Roman values. This inevitably led later writers to charge the emperor with incestuous relations, a rumor that is almost certainly false.

In recent auctions, exceptional examples of this type have sold for prices ranging from $15,000 to 21,000. Worn or corroded examples that have been “tooled” to improve the detail can sometimes be found for under $2,000. Cast forgeries are common, mostly modern, some dating back to the Renaissance that are collectable in their own right. 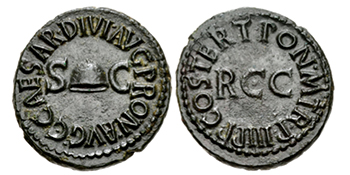 Perhaps the most enigmatic coin of Caligula’s reign was the smallest regular Roman denomination, the quadrans. It took 64 of these little coppers to equal the value of one silver denarius – a day’s pay for a manual worker. On the obverse, the emperor’s name and titles surround a “liberty cap” – the felt hat worn by freed slaves – bracketed by the letters “SC”. The reverse inscription continues the emperor’s titles, surrounding the large letters “RCC”.

For many years, the consensus of numismatic scholars was that this abbreviation stood for remissa ducentesima, celebrating Caligula’s repeal of an unpopular one-half percent sales tax (“one part in two hundred” – “CC” being the Roman numeral for 200). A brilliant 2010 study by David Woods argues that this interpretation is unlikely, and RCC probably stands for something like res civium conservatae (“the interests of citizens have been preserved”).

The quadrans is probably the most affordable coin of Caligula, with decent examples appearing at auction for under $100.

The Making of a Monster

So much for Caligula the Emperor; the rest of this history must needs deal with Caligula the Monster.
— Suetonius, The Twelve Caesars, 22.1

Caligula fell seriously ill in October, 37 CE. After he recovered, his personality (always rather dark) took a decided turn for the worse. He became increasingly paranoid, ordering the execution or forcing the suicide of many who were previously close to him. He reportedly took special delight in having people tortured to death in his presence. As his increasingly bizarre expenditures emptied the treasury, he had wealthy Romans executed in order to seize their assets. Nevertheless, Suetonius reports that Caligula was devoted and faithful to his fourth and last wife, Milonia Caesonia, “who was neither beautiful nor young”.

The Death of Caligula

On January 24, 41 CE, conspirators including Cassius Chaerea, an officer of the Praetorian Guard, stabbed Caligula to death as he left a theatrical performance. Caesonia and her young daughter were also murdered. The only certainly identifiable contemporary portrait of Caesonia appears on a rare provincial bronze issued by Caligula’s childhood friend, Herod Agrippa I (11 BCE – 44 CE), the Roman client-king of Judaea. Gold and silver issues of Caligula are scarce, and in high demand from collectors, especially those determined to complete a set of the “Twelve Caesars” – all the Roman rulers from Julius Caesar to Domitian. Some of the bronzes are quite common, particularly the bronze as with Vesta reverse – decent examples can be found at auction for well under $200. For bronzes in the highest grades, with pristine surfaces and untouched patinas, the sky’s the limit.

For an emperor who was supposedly feared and hated by the Romans by the end of his short reign – only three years and 10 months – Caligula’s coins seem to have a good survival rate, and few that reach the numismatic market are mutilated. Some have the first ‘C’ of the emperor’s personal name filed off or scratched out, but it is rare to find deliberate ancient gouges or cuts across the portrait.

Any collector approaching the coinage of Caligula seeking evidence of madness, decadence and depravity will be disappointed. Coinage is conservative, and these coins present an idealized portrait of a rather dorky young man, along with a series of stock images reflecting the conventions of classical art that the Romans adopted from the Greeks.

[1] It is now in the Biblioteca Medicea Laurenziana in Florence: http://www.bml.firenze.sbn.it/

[3] Some writers translate the word as “Bootikins”.

[4] A decree of the Roman Senate in September of the year 14 proclaimed Augustus a god only a month after his death. Fortunately, the U.S. Constitution does not grant the American Senate such power.

[5] Orichalcum – an alloy of copper and tin with a percentage of zinc. This metal had a golden color when new. Rome’s unknown source of zinc-rich ore seems to have given out by the end of the first century.

[7] Adding up to a bit more than twice the annual salary of a regular legionary soldier.

[10] Greek and Roman artists delighted in depicting abstract concepts like “Security” or “Concord” as graceful female figures. These are not goddesses, strictly speaking, but “personifications”.