One popular area for ancient Greek coinage is central Greece, home to a number of important cities, notably Athens. From the sixth century BCE onward, a great variety of coins were struck there, principally in silver and base metal.

In this column we’ll focus on silver coins about the size of a United States dime or nickel – usually drachms, hemidrachms, tetrobols or triobols. These coins are interesting and desirable, yet they can be acquired often for modest prices.

We’ll avoid rare issues, as well as those from the Archaic period (c. 760 to 479 BCE), and focus on the more available coins of the Classical and Hellenistic periods (c. 479 to 30 BCE). 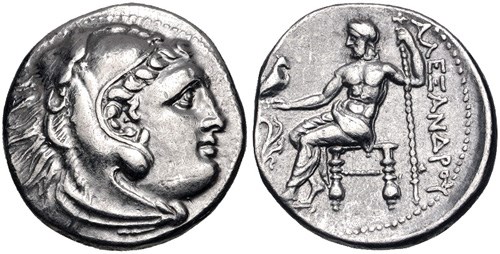 With the exception of our first coin (above), we’ll also avoid ‘royal’ issues of Greek kings. This piece is a drachm of the type introduced by Alexander III ‘the Great’, who reigned as king of Macedon from 336 to 323 BCE. It was struck at a mint in Greece or Macedon between c. 310 and 275 BCE, well after Alexander’s death. It is included because coins like this were common in the marketplaces of central Greece.

The region of Epirus is located in the western part of central Greece. Shown above is a drachm issued after c. 238 BCE by the Epirote Republic, a federation of cities from the region. It shows the head of Zeus and his favorite bird, the eagle. 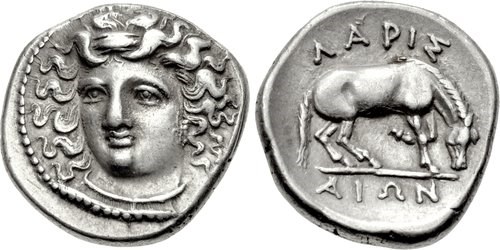 East of Epirus was Thessaly, a region famed for its powerful horses and home to many coin-issuing cities. The most important of these was Larissa, which in the mid-fourth century BCE issued the hemidrachm shown above. It depicts the facing head of the city nymph and a horse preparing to roll.

Also in Thessaly was the city of Lamia, which between c. 400 and 350 BCE struck this attractive hemidrachm portraying the god Dionysus. The reverse shows an amphora, beside which is a smaller, one-handled vessel called a prochous.

An especially gifted artist at the Thessalian city of Oetaei engraved the dies used in the mid-fourth century BCE to strike this hemidrachm (above). The obverse shows the head of a lion biting a spear, and the reverse shows the hero Heracles holding a club. At the extreme south of Thessaly was Pharsalus, where the hemidrachm above was struck in about 400 BCE. It shows the helmeted head of the goddess Athena and the head and neck of a horse. Some 350 years after this coin was struck, Pharsalus was the site of an epic Roman battle at which Julius Caesar defeated Pompey the Great.

Shown above are two drachms issued c. 150-100 BCE for the Thessalian League, which represented the combined authority of a number of Thessalian cities. The first shows the head of Apollo and the striding figure of Athena, the second features the helmeted head of Athena and a prancing horse. Our final coin from Thessaly is a drachm issued for mercenary soldiers who had been gathered in the region by the Macedonian king Perseus (179-168 BCE). Since these soldiers of fortune hailed from the island of Crete, where coins of nearby Rhodes were a de facto currency, the Rhodian types with the facing head of Helios and an opening rose were chosen for this issue of c. 171 or 170 BCE. Southwest of Thessaly was the mountainous region of Aetolia, where late in the third century BCE the triobol above was struck on behalf of a confederation of cities. It pairs the head of the local hero Aetolia, wearing a causia hat, with the sprinting Caledonian Boar (which, according to lore, had ravaged Aetolia and was slain there).

Southeast of Aetolia was the region of Locris, with its mountainous borders and fertile coastline. The hemidrachm above was struck on behalf of some of the Locrians, called the Opuntian Locrians, in about 300 BCE. It shows the head of the goddess Demeter and the charging figure of Ajax ‘the lesser’ who, along with the more famous Ajax, led troops in the Trojan War.

To the east of Locris was Phocis. The triobol above was struck in the 350s B.C. for a confederation of Phocian cities. Its obverse has an impressive facing head of a bull, and its reverse has an artful head of the god Apollo. Thebes was the foremost city of Boeotia, the neighboring region to the south. It was well known for its silver coins, which had a shield with edge notches on their obverse and a vessel on their reverse. Shown above are two such coins. First is a hemidrachm issued at Thebes between c. 425 and 375 BCE, which has a cantharus or kantharos on its reverse. The second is a drachm issued around 300 BCE by the Boeotians as a federation (the ‘Boeotian League’), which has an amphora on its reverse. Two other federal issues of Boeotia – both drachms – appear above. The first, issued c. 250 BCE, shows the facing head of a goddess (Demeter or Kore/Persephone) and the standing figure of Poseidon holding a dolphin and a trident. The second, struck c. 225-171 BCE, shows the head of Poseidon and the standing figure of Nike holding a wreath and a trident.

The most famous region of central Greece was Attica, home of Athens, a city that struck untold millions of silver coins for local use and for export to markets throughout the Mediterranean and the Near East. Above are two drachms of Athens.

Just off the eastern shore of the mainland was Euboea, a very large island that was home to several important, coin-issuing cities. Shown above is one example, a drachm of Chalcis struck in the early third century BCE with the head of the local nymph and an eagle clutching a serpent. Another important city on Euboea was Histiaea, where the two coins above were produced. First is a drachm of c. 350-300 BCE with the head of a nymph or maenad and a bull standing beneath a grapevine. Next is a tetrobol of the third or second century BCE showing the head of the local nymph and that same nymph seated on the stern of a galley.

Rounding out the most familiar issues of Euboea is the drachm (above) produced for the Euboean League, c. 304-290 BCE. Its obverse features the head of the island’s nymph and its reverse shows a facing bullhead adorned with fillets. 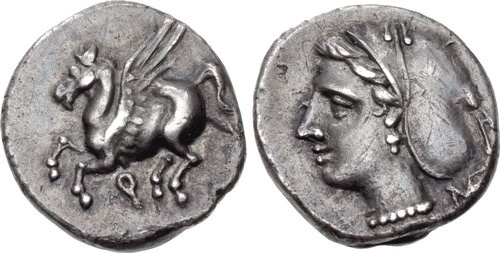 At the junction of the Greek mainland and the Peloponnesus (the large landmass to the south) was the city of Corinth. It issued a great quantity of coinage, including the two drachms above, which were struck c. 350-300 BCE. Both show on their obverse the mythological winged horse Pegasus, and on their reverse different portraits of a divinity usually identified as Aphrodite or the fountain nymph Pierene.

What follows are five ‘honorable mentions’ that, while not struck in central Greece, were no doubt familiar to those living on the mainland.

We’ll start with the drachm (above) struck c. 350-338 BCE on Aegina, an island close to the shore of central Greece. It features a land tortoise with a segmented shell and an incuse punch divided into five sections.

Next are two triobols of Sicyon, a Peloponnesian city near the junction with the mainland. The first was struck between c. 330 and 280 BCE and shows the fierce monster Chimera and a dove in flight. The second was produced c. 195-188 BCE as an issue of the Achaean League, a confederation of cities in the region; it features the head of Zeus and the league monogram within a laurel wreath. Our final two coins are drachms from Illyria, in the northeastern extreme of central Greece. Both coins share the same principal designs, a cow suckling her calf and a ‘double-stellate pattern’, and differ only in the details, inscriptions and supplementary symbols. The first is from the city of Apollonia, the second is from Dyrrhachium. These types were struck in very large quantities from the third through the first centuries BCE.