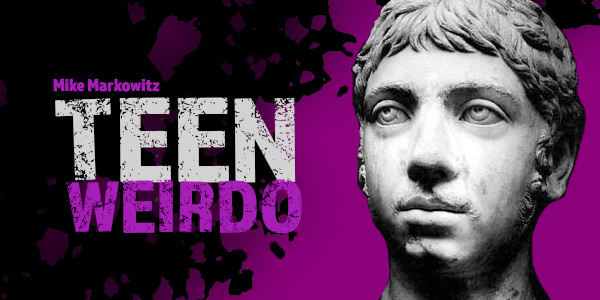 …[To] sport with the passions and prejudices of his subjects, and to subvert every law of nature and decency, were in the number of his most delicious amusements. A long train of concubines, and a rapid succession of wives, among whom was a vestal virgin, ravished by force from her sacred asylum, were insufficient to satisfy the impotence of his passions. The master of the Roman world affected to copy the dress and manners of the female sex, preferred the distaff to the sceptre, and dishonored the principal dignities of the empire by distributing them among his numerous lovers[1].

—Edward Gibbon, Decline and Fall of the Roman Empire (1776)

THE BIRTHDATE AND birthplace of the emperor Elagabalus[2] are uncertain. He was probably born in the year 203 or 204 CE, possibly at Rome or in the Syrian town of Emesa (modern Homs) where he descended from a line of hereditary high priests of the local sun god, Elagabal[3]. His given name was Sextus Varius Avitus Bassianus. His grandmother Julia Maesa (165 – 224,) was the shrewd and immensely wealthy sister of the empress Julia Domna, the wife of Roman emperor Septimius Severus (ruled 193 – 211). This era of Roman history is known as the Severan Dynasty (193 – 235).

When Severus’s son, the increasingly demented Emperor Caracalla, was assassinated on 8 April 217, the Praetorian Prefect Macrinus (commander of the palace guard) seized the throne. Julia Maesa immediately began plotting to replace him with her 14-year-old grandson. She put out a story that young Bassianus was actually Caracalla’s son–a rumor that his mother, Julia Soaemias, did nothing to refute. To reinforce this message, Bassianus took Caracalla’s given name, Marcus Aurelius Antoninus (the name that appears on his coins).

Gathering an army of local legionaries, who revered the memory of Caracalla, the rebels defeated Macrinus in battle near Antioch on 8 June 218.

As the powers behind the throne, women feature prominently on the coinage of this era, which frequently bears the title AUGUSTA (“empress”). There were massive issues bearing the portraits of Julia Maesa and Julia Soaemias. For Julia Maesa, common reverse types are Juno (queen of the gods), FECUNDITAS and PVDICITIA (“fertility” and “modesty”, conventional female virtues). For Julia Soaemias, a common reverse type is Venus Caelestis (“Heavenly Venus”), an aspect of the love goddess that was identified with the Semitic goddess Astarte.

Young “Antoninus” was proclaimed Emperor by his troops, and the Senate in Rome had little choice but to ratify his official titles. An early denarius[4] struck at Antioch shows the arrival (ADVENTUS) of the emperor riding an improbably small pony. The profile portrait exaggerates the size of the eye, in a stylized “Eastern” manner to make the image seem more spiritual. Along with his mother, grandmother and entourage the emperor made a leisurely progress westward, wintering at Nikomedia and arriving at Rome in June or July 219. The Stone of Emesa, a large conical meteorite considered the embodiment of the sun god, accompanied the imperial party. It appears on rare gold aurei and silver denarii regarded as the most important and desirable coins of this emperor. The inscription SANCTO DEI SOLI – ELAGABAL (“to the holy sun god Elagabal”) might have been the first indication to many Romans that an exotic new deity was being promoted.

Late in 219, his grandmother arranged his marriage to Julia Cornelia Paula, a young woman from an old aristocratic family. Her portrait appears on coins, with a reverse depicting Concordia, the personification of harmony. The unhappy marriage ended in divorce after only one year. Deprived of her title as empress (Augusta), Julia Paula retired to private life and disappeared from history.

The denarius of Julia Paula is relatively common but the gold aureus is a great rarity, with only about a half dozen known; an example sold for over $454,000 in 2008[5]. In 221, Elagabalus shocked Romans by marrying Aquilia Severa, one of the Vestal Virgins, priestesses who tended the sacred fire in the Temple of Vesta. Under a strict vow of chastity, the Virgins were surrounded by a complex web of taboos and represented one of Rome’s oldest and most deeply revered traditions. The emperor defended this violation in a letter to the Senate, declaring that the high priest of the sun god and the priestess of the hearth goddess would surely bear godlike children.

Julia Maesa forced Elagabalus to divorce Aquilia Severa in 221, but he seems to have genuinely loved her because they remarried the following year. Her ultimate fate, however, is unknown. Coinage in the name of Aquilia Severa is scarce, and the reverses again depict Concordia.

In a desperate attempt to shore up the dynasty’s fading prospects, Julia Maesa arranged a third marriage, this time to Annia Aurelia Faustina, a descendant of the revered Marcus Aurelius. She had two infant children by a previous marriage. Coinage in the name of Annia Faustina is extremely rare. An example of the denarius (“the fifth and probably the finest known”) sold for over $62,000 in a 2009 auction[6].

Along with wives Elagabalus had a succession of male lovers. The most famous of these was Heliocles, a handsome blond charioteer[7] who supposedly “married” the emperor and beat him when he was unfaithful. Romans were fairly relaxed about sex[8], but it was considered unseemly for elite adult males to play a passive role. While the emperor was a beardless youth, elite Romans tolerated a certain amount of sexual license, but they expected a growing measure of seriousness as he matured – a seriousness which was not forthcoming.

Still, during the last two years of the reign of Elagabalus his coin portrait appears with a beard, probably to emphasize the emperor’s resemblance to Caracalla. On some types, a peculiar “horn” projects from the emperor’s laurel wreath. In 1997, a German numismatist identified this as a dried bull’s penis, a rather obvious symbol of potency (Krengel, 53-72).

In Roman society (much as in our own time), accusations of sexual perversion and depravity were a political tool, used to damage the reputations of opponents (whether they were true or not). Ancient accounts of the bizarre behavior of Elagabalus should be understood in this context. Elagabalus may very well have been a scandalous personality, but he was also strong-willed in a way that made conflict with the Roman elite inevitable.

“Elagabalus was not a tyrant, but he was an incompetent, probably the least able emperor Rome had ever had. That the empire continued to function was due mainly to the efforts of his grandmother. Never more than a figurehead, he soon became an embarrassment (Goldsworthy, 81).”

The emperor’s mother (Julia Soaemias) had a sister (Julia Mamaea) who had a son (Alexianus, born 1 October 208). Elagabalus having failed to produce an heir, the women of the family pressured him to adopt his cousin Alexianus as his successor. An entirely conventional young elite Roman, Alexianus proved to be popular with the army. When Elagabalus tried to depose him, the Praetorian Guard revolted. On 11 March 222, Elagabalus and his mother were brutally murdered, and Alexianus was proclaimed Emperor under the name Severus Alexander.

Considering his short reign and official condemnation (damnatio memoriae, or “damnation of memory”), the coinage of Elagabalus is very common. This may be because it was extensively hoarded due to rampant inflation and debasement over the following decades. There are hundreds of different types.

Antioch, Rome, and possibly Nicomedia were the only mints, apart from the extensive provincial city coinage of the Greek-speaking East. On the CoinArchives Pro database, which lists over three million recent auction records, the search term “Elagabalus” produced over 9,800 hits, of which some 4,300 were denarii.

Gold aurei command high prices, going for $3,500 – 5,000 even in the lowest grades. But fine collectible denarii, which are about 50% silver, can often be purchased for US$50 or less.

[2] In many older sources he is called Heliogabalus, the Latinized name of his god.

[7] The drivers who raced chariots in Rome’s Circus Maximus were the movie stars of the ancient world, moving in the highest ranks of society despite their often humble origins.

Corbier, Mireille. “The Economy of the Empire”, The Cambridge Ancient History, Volume XII: The Crisis of Empire, AD 193-337. Cambridge (2005)

Icks, Martijn. The Crimes of Elagabalus: The Life and Legacy of Rome’s Decadent Boy Emperor. Harvard (2012)

Rowan, Clare. “The Procession of Elagabalus and the Problem of the Parasols”, Journal of the Numismatic Association of Australia 17 (2006)