FIVE DAYS MARCH inland from the Red Sea, on the hilly Tigray Plateau, stands the city of Aksum (or Axum).

From the first century to the seventh, it was the capital of an empire that at its peak controlled much of Ethiopia and South Arabia. Aksumites traded with Egypt, Rome, Persia, and India, exporting frankincense and myrrh (the valuable fragrant resins of desert shrubs), gold, ivory and salt, and importing wine, olive oil, fine fabrics, silver, and copper. They raised towering stone monuments – some of the largest granite monoliths quarried in antiquity – which still stand.

Where the south declines towards the setting sun lies the country called Ethiopia, the last inhabited land in that direction. There gold is obtained in great plenty…
—Herodotus, The Histories, Book 2 (c. 450 BCE)

Many of the 20 or so Aksumite rulers are known only from their coins; the precise dates, and even the sequence, are often uncertain. Since the early 20th century, a handful of scholars have studied these coins to untangle the obscure history of this African kingdom.

Beginning in the late third century, the kings of Aksum minted gold, silver, and bronze. These were the only coins created in Africa south of the Sahara in ancient times.

The gold unit was one-half of the weight of the contemporary Roman aureus. This was a convenient size for a trade coin, about 2.7 grams (for comparison, an American nickel weighs exactly five grams). The design was the same on both sides: the head of the king facing right, wearing a close-fitting headcloth (sometimes described as a “helmet”). After the 4.5-gram Roman solidus replaced the 5.4-gram aureus in the fourth century, the Aksumite gold unit dropped to around 1.7 grams. It is often cataloged as a tremissis, but we don’t know what any Aksumite coins were actually named.

Flanking the portrait on the left and right are curved ears of grain. This is a universal symbol of abundance, familiar to collectors from the reverse of the 1909 American “wheat” cent. Above the king, a small crescent and disc symbolize the solar and lunar gods of Aksumite polytheism. Inscriptions are in Greek: obverse ENDYBIC BACILEYC “King Endubis,” continuing on the reverse AZWMITW BICI DAXY “of Aksum, Man of Dakhu”. “Bisi”, meaning “man of” in the Ge’ez language, may signify some kind of tribal or clan affiliation.

The silver coinage, on a lighter weight standard (about 2.1-2.3 grams), repeats the same design without the ears of grain.

Aphilas (reigned c. 300-310) followed the same designs but introduced a fractional coin: one eighth of the gold unit, or about 0.36 grams (an aspirin tablet weighs a similar amount at 350 milligrams). The die engravers were challenged to crowd the name and title onto the reverse of these tiny coins, only 7 mm (0.275 inches) in diameter.

The experiment was not a success: no subsequent kings issued gold fractions.

But another innovation of Aphilas persisted for centuries — many of his silver coins had gold “inlays” on or around the royal portrait. This labor-intensive enhancement made for more impressive coins, of richer perceived value. Later, even low-value coppers were embellished with gold leaf.

Artistically, the peak of pagan Aksumite coinage came under Wazeba and Ousanas (c. 320), who may have been co-rulers. On the obverse of their gold they wear tall elaborate crowns or “tiaras”. The second known example of Wazeba’s gold, with inscriptions in Ge’ez (the classical language of Ethiopia) rather than Greek, sold at auction in 2011 for $16,000 USD – apparently the highest price on record for an Aksumite coin.

Ezana’s early coinage repeats the pagan crescent and disc symbol, but his later issues substitute the Christian cross, possibly the first use of this symbol on coins anywhere.

Like his Roman contemporary Constantine the Great (ruled 306 – 337), Ezana’s conversion to Christianity was reflected on the coins. St. Frumentius (died 383), a Syrian slave revered as the founder of the Ethiopian Orthodox Church, converted young Ezana when he was the prince’s tutor. Ezana’s early coinage repeats the pagan crescent and disc symbol, but his later issues substitute the Christian cross, possibly the first use of this symbol on coins anywhere. Some coins from this period have no religious symbol at all, and some are “anonymous” – perhaps from interregnal periods or disputed successions.

In the mid-fifth century, Mehadeyis or “Matthias” (rendered as MHDYS on his coins) replaced Greek coin inscriptions with Ge’ez. On a unique gold coin reportedly found in Yemen, the crowned and standing king holds a spear and shield. The reverse, closely modeled on Roman solidi struck from about 420 to 450, shows a winged Victory or angel holding a long cross. On a silver coin of the same ruler, ears of grain flank the cross, surrounded by a translation in Ge’ez of Constantine’s motto “By this cross, conquer”.

Used primarily for trade, Aksum’s gold coins are found mainly in South Arabia. The al-Madhariba hoard of 868 Aksumite and 326 late Roman coins–discovered in Yemen in the 1980s–was buried sometime after the year 550. Some Aksumite gold, including contemporary imitations, have been found in southern India, often pierced for use as jewelry.

The silver and bronze, in contrast, are seldom found outside Ethiopia, although some have turned up in Israel, carried by Aksumite pilgrims to the Christian holy places.

King Ebana (c 460?) and his successors Nezana and Nezool struck a large proportion of the Aksumite gold coins that reach the collector market. The empire then reached its greatest power and extent under Kaleb (c. 520), who began a custom of royal names from the Old Testament. On Kaleb’s gold coins a row of three crosses is thought to symbolize the Trinity.

Kaleb fought a protracted war in Arabia, eventually destroying the Jewish and pagan kingdom of Himyar in Yemen. The war may have exhausted the kingdom, leading to a period of decline reflected in the deteriorating workmanship, weight and metal quality of the coins produced under kings Alla Amidas, Israel, and Gersem.

On the last bronze coins the king is shown frontally rather than in profile, copying the style of contemporary Byzantine types. Designs become increasingly crude, and a note of desperation creeps into mottos like “Peace and Mercy” on the inscriptions. Armah, the last ruler to mint coins at Aksum, is depicted as a full-length figure enthroned.

Aksum was abandoned around the year 630. Although a line of chieftains in mountains to the south continued to claim the title “King of Aksum”, the rise of Islam in Arabia cut off access to the trade routes that had been the source of the kingdom’s prosperity. The history of Aksum was largely forgotten, replaced by legends and myths created by later dynasties. 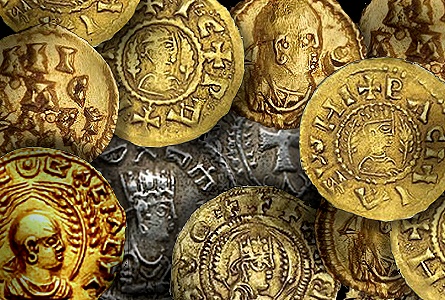 Common gold types now seem to retail in the US for around $1,000 and up. Fine silver pieces go for around $200 – 350, and nice bronzes can still be found for under $100. Silver and bronze with intact gold inlays command a premium. Fakes are common in Ethiopia, but are generally not dangerous to experienced dealers and collectors.

Because of Italy’s long and troubled involvement in the region, Italian numismatists like Arturo Anzani (1879-1946) and Francesco Vaccaro (1903-1990) pioneered early research on Aksumite coinage. Standard references in English are by the British archaeologist Stuart Munro-Hay (1947-2004) and Dr. Bent Juel-Jensen (1922-2006), a Danish-born physician who worked at Oxford and left his extensive collection to the Ashmolean Museum. Austrian numismatist Wolfgang Hahn has made important contributions to the field in German and English.

Munro-Hay, Stuart. Catalogue of the Aksumite Coins in the British Museum (v.1). London. (1999)