Seleucus I Nicator, the founder of the Seleucid Empire, never put his own portrait on the empire’s coinage. Why?

Since coins were one of the most effective tools for mass propaganda in the pre-modern world, it quickly became standard practice for a ruler to put their likeness and imperial imagery on the kingdom’s coins. So why did Seleucus I eschew tradition?

Firstly, Seleucus was borrowing legitimacy from his predecessor: the conquering general, Alexander the Great. Many of the early tetradrachms of the Seleucid Empire under Seleucus I bear a striking resemblance to those struck by Alexander during his lifetime. These coins depict Alexander as Heracles on the obverse, wearing the skin of the Nemean lion. Additionally, the standard image of a seated Zeus holding either an eagle or a miniature figure of Nike on the reverse is very similar to the lifetime Alexandrian types.

Yet however similar these two series are, they are definitely not the same. On the obverse of the Alexandrian type, the bust has distinctly smoother features and on the Seleucid type, the reverse legend proclaims “Basileus Seleucus”. 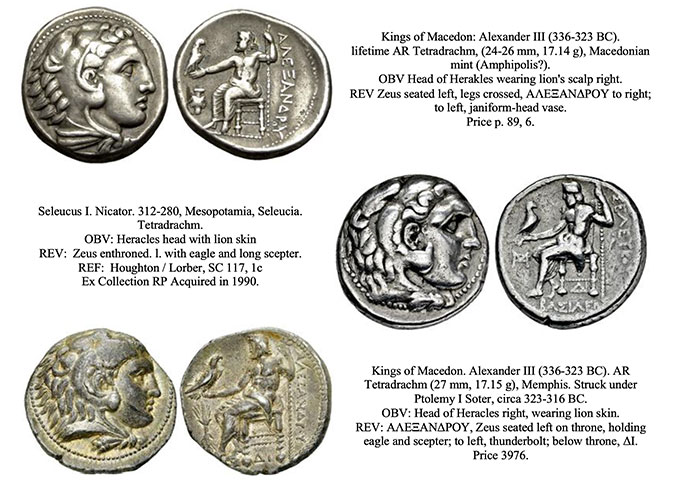 Seleucid type apart from the bulk of posthumous Alexandrian tetradrachmai which retained the legend AΛΕΞΑΝΔΡΟΥ. The example above, from Seleucus I’s great rival Ptolemy I, preserves this original legend in a further link to the legitimacy of Alexander the Great. By employing the imagery yet discarding the legend, Seleucus was declaring his individuality while reinforcing his connections with Alexander.

We know that the design prerogative for the larger denomination Seleucid coins rested almost exclusively with the royal household. Since the smaller denomination bronze coins had “more limited circulation” as well as “significantly less value”, there was less impetus for the central authorities to expend significant resources in the maintenance of their design, and as such the local mint workers were afforded more “leeway” in their production. To ensure consistency across the more valuable silver types, the government created “sets of written instructions, drawings and/or portraits” for the local mint workers and engravers. These instructions must have included examples of acceptable portraiture, imagery, and the relevant “diadems, horns, laurel crowns, etc” that were part of the royal portrait.

Another possible reason that Seleucus never included his own portrait on the empire’s coinage might be that it allowed him more room to promote his fledgling dynasty and personal triumphs. For example, the famous Bull helmet type is a commemorative piece. Originally thought to commemorate Seleucus’s victories over the upper and eastern satrapies of Alexander the Great’s empire as well as his own royal ascension in 305 BCE. However, analysis of the reverse imagery suggests differently.

The reverse image on this type is a standard military trophy constructed from the arms and armor of a defeated foe. Typically, this stylized image would depict the ethnic armor of the defeated, and this trophy is “unquestionably built from Macedonian arms.” This can be concluded due to the presence of a Vergina Sun, or Argead Star, on the shield. This design is the famous Macedonian standard and is used to this day on the flag of the Republic of North Macedonia. As a result, we must assume that this coin commemorates the Seleucid victory at the Battle of Ipsos where Seleucus won a dramatic victory over his Antigonid rivals. Interestingly, bull horn imagery references a time when Seleucus “barehandedly” captured a sacrificial bull that had broken loose during a religious ceremony with Alexander.

It is interesting that, while the Seleucid war elephants played a significant role in the battle, they are not included on the Bull Helmet type. However, two other series of tetradrachmai struck under Seleucus I do include elephants. The more common of the two was struck mainly in the eastern empire and depicts a laureate head of Zeus on the obverse. Its reverse image is of a quadriga (a four-“horse” chariot) drawn by elephants. This type references the “500 war elephants Seleucus received in settlement with Chandragupta in the Peace of 303”, as well as the “contemporary staters of Ptolemy I” that depicted “the deified Alexander III riding in a quadriga of elephants”.

In 281 BCE, Seleucus ordered the production of a tetradrachm to commemorate his victory over Lysimachos at the Battle of Corupedium. This simple, yet elegant, design shows the “heroic” horse head that most numismatists believe to be Alexander the Great’s personal mount, Bucephalus. The reverse image is of an elephant which symbolizes Seleucid might.

An alternate theory of this type is that it represents the horse Seleucus rode as he fled from Babylon in 316 BCE. Fewer than 10 examples of this “almost medallic” type are known to exist.

Tetradrachmai are not the only place one should look for reasons that Seleucus did not order his own portrait placed on the empire’s coinage.

Since the Seleucid Empire encompassed so many diverse peoples, from Sardis in the west to Bactria in the east, Seleucus needed to make provisions for local sensibilities. Such a large empire would prove difficult to maintain if a ruler decided to impose a foreign culture onto the regional satraps.

One such example of these cultural accommodations is the stater, or double shekel, struck in Babylon seen below. On this issue, Seleucus does not use the Greek god Zeus but rather the Babylonian god Baal. On the reverse, the emperor employs an ancient Babylonian icon, the lion. By using these symbols, and not imposing his own will, Seleucus paid lip service to the historic importance of Babylon, thus mollifying the local elites.

While there is no definitive proof that Seleucus I’s portrait appears on any domestic coinage during his lifetime, there are two coins struck that bear his likeness.

Antiochus I, son of Seleucus I, deified his father shortly after his assassination in 281 BCE. To commemorate this event, Antiochus ordered a Bactrian mint to strike coins with a horned portrait of his father.

The second portrait coin of Seleucus I is not actually Seleucid. It was actually struck under King Philetairos of the Pergamene kingdom in western Anatolia. The obverse image is a simple diademed head of the Seleucid king while the reverse is of a seated Athena resting her Aegis shield on her knee and a spear on her shoulder.

Philetairos was originally a vassal of Lysimachos, who placed him in charge of Pergamon and its vast treasury of silver. However, when Lysimachos executed his son Agathokles for treason in 281 BCE, Philetairos incited Seleucus to help him rebel. Once Lysimachos was defeated and killed at the Battle of Corupedium, Seleucus became the undisputed “master” of western Asia Minor. This coin is the earliest “indisputable” image of the famous Seleucid ruler.

This official flattery did not extend to the legends on the reverse. Philetairos did not use the official Seleucid legend and instead placed his used his own name on the reverse, without the title “Basileus”.

The fact that Seleucus’s portrait never appeared on a Seleucid coin during his lifetime is very interesting. Especially when it is considered that coins of the succeeding Seleucid emperors “constituted the finest portrait gallery of kings ever to appear on coins.” We must therefore assume that it was a deliberate choice and not an accident that Seleucus’s portrait never appeared on his coinage.