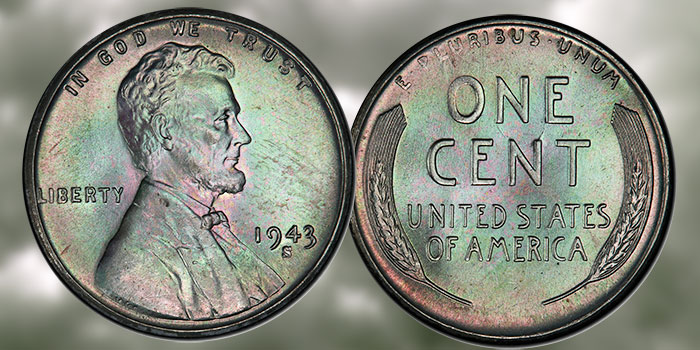 On Sunday, March 21, bidding ends on GreatCollections.com for this toned 1943-S Steel Lincoln Cent, graded MS-66 by PCGS and approved by CAC.

Among Lincoln Wheat cents, the steel cents of 1943 are some of the most well-known pennies to even the general public. At the height of World War II, the United States Mint altered the composition of the small cent to a planchet of steel coated in zinc in order to divert much-needed copper to the war effort. These regular issue steel cents were minted in 1943 at the Philadelphia, Denver, and San Francisco Mints, with production of the copper (technically bronze) cent resuming the next year.

The San Francisco issue, at 191,550,000 pieces struck, was the lowest of the three original mintages, with Denver striking almost 218 million and Philadelphia producing almost 685 million. Naturally, there were accidental strikings of copper cents in 1943 and steel cents in 1944, and these off-metal error coins are among the most valuable and highly sought-after Lincoln cents of all time – but that in no way detracts from the appeal of a business strike 1943-S steel cent to collectors of the series, especially in High Mint State with a strong strike and a pleasing amount of light toning over the entire surface of the coin.

Indeed, people were enthralled by nice examples of the coin at the time it was released, which resulted in many being preserved in Gem quality. Today, PCGS reports 5,743 grading events at MS-66, which is the largest population for Mint State 1943-S Lincolns at that company. Several of these have been sold at auction in recent years, with prices for the end of 2020 alone averaging to around $250 USD and tending around a median of $228.

At the time of writing, the high bid for this highly collectible 1943-S Lincoln Wheat cent is $525 after 23 bids. Undoubtedly, the toning and the green CAC sticker account for the extra demand the item is seeing.

With few exceptions, millions (if not billions in more modern times) of Lincoln cents have been produced every year. Combined with its low face value, it is a coin that almost anyone can collect, including kids. Yet the series also features enough rarities and varieties both major and minor to hold the interest of the serious numismatist.

On the obverse, Brenner’s portrait of Abraham Lincoln depicts the President from the shoulder up. Lincoln is dressed in a period suit and is wearing a bow tie. At the top of the design, wrapping around the rim is the motto “IN GOD WE TRUST”. “LIBERTY” appears behind Lincoln’s neck, on the left side of the coin. The date appears slightly lower, in front of Lincoln’s portrait, on the coin’s right side. The mint mark “S” is below the date.