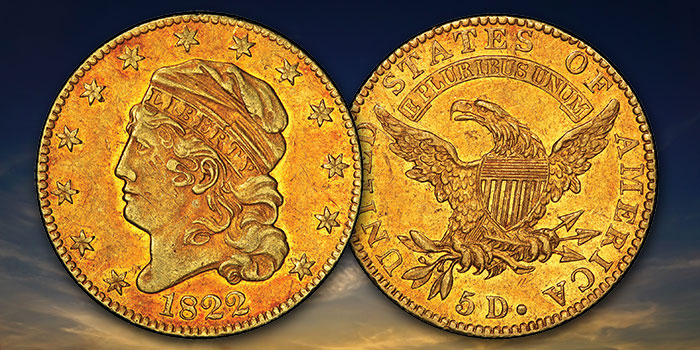 Only Specimen in Private Hands

Stack’s Bowers Galleries will present at public auction the finest known 1822 half eagle, the D. Brent Pogue Collection coin. It is a legendary American treasure, the only example in private hands of what is acknowledged as the key to a collection of American gold coins. This exceptional coin will be featured in the firm’s March 23-26, 2021 auction in Las Vegas, Nevada.

There are only three known specimens of the 1822 half eagle. Certified as AU-50 by PCGS, the Pogue coin is the finest of the three. As for opportunities to purchase an example of this date, they are just as rare. There have been only two occasions in American numismatic history in which an 1822 half eagle has sold at auction: in 1906 at the H.P. Smith Collection sale, and in 1982 at our sale of the Louis E. Eliasberg Gold Coin Collection.

A notable offering took place sometime before 1941, the year that B. Max Mehl showcased an 1822 half eagle in his William Forrester Dunham sale with this headline: “The rarest and Most Valuable Coin in the Entire United States series! (Probably the Rarest Coin in the World). The 1822 $5.00 Gold!” 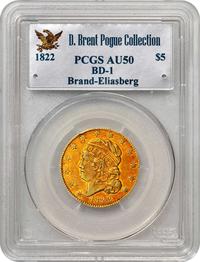 It never crossed the auction block… no bidders had a chance! It was so important to Mehl and so valuable that he sold it privately before the sale to Charles O. Williams, a Cincinnati insurance executive. That coin later passed to Josiah K. Lilly of pharmaceutical fame, and was donated with the Lilly Collection of gold coins to the National Numismatic Collection in the Smithsonian Institution. The other example, also in the Smithsonian, was from the Mint Cabinet Collection, where it had been since the 1830s.

In his 1979 study, United States Gold Coins, An Analysis of Auction Records, Volume IV, Half Eagles 1795-1929, David Akers made this definitive statement:

“The legendary 1822 half eagle is the most famous and desirable United States gold coin. It traded hands at fantastic prices when other great rarities that are now worth six figures were bringing mere pittances.”

In a word, the 1822 half eagle is legendary. Most of the great figures in American numismatic history never owned one, and many if not most have been born and died without ever having had the chance to compete for one at auction. J.P. Morgan, who had unlimited finances and who later gave much of his coin collection to the American Numismatic Society, desired to own an 1822 half eagle and offered a tremendous sum for the Dunham coin–multiples of any price any coin had ever sold for anywhere in the world–but was refused.

The example offered in the March 2021 Stack’s Bowers Galleries auction was acquired by Virgil Brand in 1899 and held in his vast collection until sold by his heirs in 1945. At that time it entered the unparalleled cabinet of Louis E. Eliasberg, Sr., and became part of the only complete collection of U.S. coins ever formed. When the gold coins from the Eliasberg Collection were auctioned in 1982, the successful buyer was the young D. Brent Pogue in the early stages of building what would become the most valuable coin collection in numismatic history. This coin was considered a family treasure when it was offered in May 2016, prior to the untimely passing of D. Brent Pogue in August 2019.

Today the 1822 half eagle stands at the peak of American rarities in private hands–with just one coin available. Opportunities to acquire an example happen only very seldom, and generations pass without even the most well-financed collectors, dealers, and museums having an opportunity to own one.

The 1822 half eagle will be featured in Stack’s Bowers Galleries’ Rarities Night session on March 25, 2021, at the Bellagio Hotel and Casino in Las Vegas. For more information visit StacksBowers.com or call 800-458-4646.