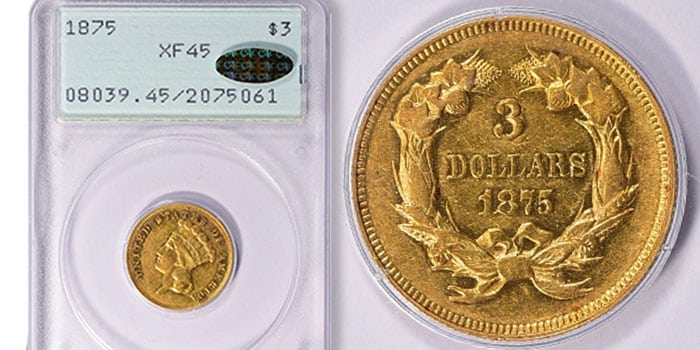 Biding is now live on Greatcollections.com for one of the rarest obtainable US gold types. Even graded as PR 45 DCAM, this 1875 $3 gold piece is extremely rare and is sure to garner extensive attention on the auction block. Secured in an OGH 1.2 Gen PCGS holder for upwards of 36 years, this coin has also earned a gold CAC sticker. Being the first US coin to receive a hammer price of more than $100,000 and with such a limited available population, interested collectors should be aware of this exciting opportunity.

One of the greatest US gold rarities, the United States Mint officially only stuck 20 Proof examples in 1875. Interestingly, with current population estimates standing at upwards of 30 surviving examples, the official mintage figure is definitely an undercount – especially when gold coinage generally doesn’t survive at rates higher than 50%.

The question is: Did the Mint undercount their official mintage, or were additional coins struck later?

Expert David Akers, along with a number of other numismatists, has argued that these additional coins were not, in fact, restrikes. Since the official mintage of 20 coins was delivered to the Treasury on February 13, to be sold in gold Proof sets, it is quite possible that the extra coins were simply struck later in the year and not recorded. To be considered a restrike, the coin must be struck in a year other than official date on the coin.

The Mint used an 1873/4 obverse die, which had a very minor die scratch from upper left serif of F and the lower half of the first S was filled in for the first 20 coins. Since this particular example displays this characteristic filled S, it is clear it was part of the official issuance.

Regardless of this extra production, the type is incredibly desirable and inspires spirited bidding whenever it comes under the auctioneer’s hammer. Very few other examples have been sold at auction over the past 10 years, of which all were PR 64 or better, but a PR 65 DCAM recently sold in September 2022 for just over $313,000!

With glassy mirrored fields and frosty devices, this orange gold specimen, which belonged at one time to the famous Harry W. Bass Jr. collection, is simply spectacular.

This particular coin displays an extensive level of wear, especially for a piece struck for a Proof Mint Set. However, all design elements are present, and the wear actually adds a certain charm to the piece. Additionally, a slight toning around the edges of the devices and legends is visible on both the obverse and reverse.

Created by James Longacre, the obverse design of the 1875 $3 gold coin features Lady Liberty wearing a stylized Native American headdress. With seven visible feathers, Liberty’s headdress also includes the word LIBERTY inscribed on the band. Liberty’s hear cascades down her neck, past the bust’s truncation, and covers most of her ears. Just within the denticled border, the legend UNITED STATES OF AMERICA rings the design.

The reverse design, while centered on the date (1875) and denomination (3 DOLLARS), is dominated by an agricultural wreath. Also used as the Flying Eagle cent reverse, this wreath is comprised of tobacco, corn, cotton, and wheat, and was used to symbolize America’s fertility and agricultural wealth.