It’s no secret that collectors at every level are drawn to low-mintage dates like dogs to a meat wagon. Hundreds of pages of mintage figures (low ones, to be specific) is one of the factors that keeps the Red Book a success after more than 65 years.

There’s one dilemma that often accompanies the desire to obtain scarcer coins. The cost is usually beyond the means of budget-minded collectors, but there are enough exceptions to the general rule to make this anything but a distant dream. The possibilities expand dramatically for the person who is willing to looking beyond U.S. coin options. In this instance, the very collectible series has it origins just across the border. 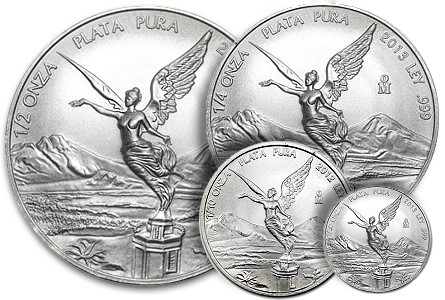 In addition to the long-running series of one-ounce Libertad silver bullion coins, the Casa de Moneda (the Mexican national mint located in Mexico City) also strikes BU and proof versions in 1/20, 1/10, 1/4 and 1/2-ounce sizes. If bigger is better is your motto, there are also two-ounce silver Libertads available for collecting.

So why are the little Libertads infrequently found at American coin shops and shows? The modest mintages might seem to be the obvious reason, but it goes deeper than that. The Casa de Moneda nullifies its skill at producing attractive products with lethargic marketing. To cite a blatant example (I can’t speak for 2013), the Mexican mint only displayed coins at some of the past American Numismatic Association summer conventions while competing world mints did brisk business.

The fractionals were first offered in 1991. Uncirculated mintages ranged from 50,000 to 50,618 for the four pieces. Why the discrepancy and not a uniform number? It was similar to pre-1950 U.S. proofs where the option of individual pieces was offered. Collectors can buy singles at the annual Mexico City coin show, and they have been shown (and quite possibly sold) at the summer ANA convention.

Don’t go overboard when buying 1992-dated fractional Libertads, as they were struck in much greater numbers than any other year. For some reason, the Casa de Moneda cranked out 295,783 1/20-ounce, 299,983 1/10-ounce, 104,000 1/4-ounce and 119,000 1/2-ounce silvers. What could be the reason for such a large and varied run of smaller Libertads? It certainly wasn’t due to rising silver prices, as the metal was languishing in the $5/ounce range. A failed attempt at marketing the pieces to the jewelry trade? The need to keep employees working during a slow stretch?

Proof versions were struck in much smaller quantities. The 1992 run of 5,000 sets was the high point for the decade. Mintage figures of 800 in 1996, 300 in 1997 and 600 in 1998 are the kind of numbers that grab the attention of collectors. Values in the Standard Catalog are more of a starting point than carved in stone pricing.

Moving to the 21st century, mintages for the proof silver fractionals were 1,000 in 2001, 2,800 in 2002, 2,500 in 2004, 2,400 in 2005 and 2,900 in 2006. Single proofs along with sets are available in the secondary market. So what is the best source for smaller silver Libertads? As with many coins that aren’t mainstream items, eBay has the largest selection of dates and sizes. It would be wise to study prices for awhile before becoming an aggressive buyer. Standard Catalog values are a good general reference, but prices are very fluid and ever fluctuating.

Combine an attractive design in silver with a series that has a history of low mintages, and you have the fractional Libertads of 19xx to date. It’s a logical option for the low-budget collector.