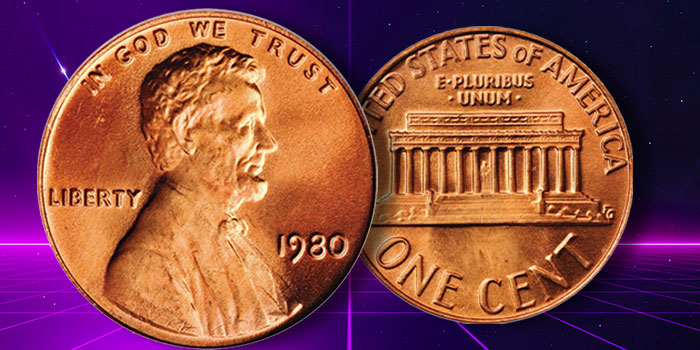 1980 was an inflection point in the history of the cent.

The juxtapenultimate date struck from the majority-copper alloy in use since the early 1960s, 1980 Lincoln cents were struck and issued against a backdrop of uncertainty about the denomination, as successive administrations tested new compositions and pondered its elimination.

The coins themselves are not remarkably rare by any measure, but the years surrounding their issuance saw a shortage of cents in circulation, a problem that had dogged the Treasury Department and the United States Mint for years. This, alongside a major collectible, doubled die variety of the date and condition rarities at the upper end of the grading scale, make the 1980 Lincoln cent quite a bit more interesting to the collector than meets the eye.

The cent’s composition had been a bugbear for the US Mint since the early 1970s. Increasing copper prices drove up the cost of manufacture, raising the specter of negative seigniorage and its attendant hoarding.

Between 1973 and 1975, the Mint experimented with a number of alloys to replace the 95% copper, 5% zinc alloy that had been in use since 1962. One of the most famous 20th-century patterns resulted from this: aluminum Lincoln cents dated 1974, struck to test the cheaper metal’s coinability. More than 1.5 million of these aluminum patterns were struck at Philadelphia (our coin profile of the 1974 Lincoln cent provides further detail about this issue).

Despite seeing a retreat in copper prices in the mid-1970s, inflation in the late ’70s and early ’80s drove the price of copper up again, underscoring the need for a less expensive alloy, less prone to market volatility. Tests continued in 1980 and 1981, even as the Mint continued to strike 95% copper, 5% zinc cents. In 1980, the Philadelphia Mint struck 7,414,705,000 cents in the copper alloy. By that time, according to David Lange’s Complete Guide to Lincoln Cents, the 1974 obverse hub was “showing its age”, resulting in weaker large dates on cents struck between 1980 and 1982 that “will not be as sharp as the dates immediately preceding (Lange, 264).”

Cent hoarding began in the 1970s, fueled by at least two motives. One, consumers and collectors were simply pulling them out of circulation and not using them in commerce. And two, speculators were removing them in anticipation that copper’s increasing price might allow them to sell the coins at a premium over face value.

In 1974, then-Mint Director Mary Brooks publicly encouraged people to spend cents rather than hoarding them, and new rules were promulgated that made melting down cents punishable by a fine of up to $10,000 or five years in prison.

June 1974 was declared “Penny Redemption Month”. Second Lady Betty Ford and Helen Bernstein, the wife of the Chairman of the Federal Reserve System, Arthur Burns, personally brought cents to the National Savings and Trust Company in Washington D.C. People who brought in $5 or more in cents would receive a Special Citation from the Treasury Department.

The Pennies for Bonds Program offered $25 U.S. Savings Bonds in exchange for $25 worth of cents.

The month-long effort was extended. A June 11, 1974 press release provided a number of reasons not to hoard cents.

Copper prices cooled in the mid-1970s, but the respite was short-lived. But late ’70s inflation drove the prices back up, and hoarding resumed.

On July 5, 1979, the next Mint Director, Stella B. Hackel, announced that no mint marks would be applied to any cents struck for circulation, reasoning that the “elimination of any distinction among coins struck at the four Mint locations should increase the circulating one cent pool.” She said collectors were removing coins bearing the “D” mint mark from circulation. She eventually backed down after an outcry from collectors, but cents continued to disappear from circulation.

By the early 1980s, the country was again facing a shortage of cents. The Washington Post reported that, despite combined cent production across Mint branches in 1980 increasing 20% over 1979, cents were disappearing, “baffling” Treasury officials. “Penny hoarding is suspected,” the article continued, noting that copper’s price stood at less than a pound, meaning that copper “would have to double in price before the copper in a penny would be worth more than one cent.”

“Where have all the pennies gone?”, The New York Times asked in December 1981. “Into piggybanks and coin collections, that’s where.” The article reported that President Carter’s administration had seriously considered eliminating the cent, explaining that “if copper prices continue to move upward a copper penny will be valued at more than a cent.” The article also shared the Reagan Administration’s plan to “debase” the copper cent with zinc.

According to officials consulted for an article that appeared published in The Washington Post in May of 1980, collectors were not driving the coins out of circulation. In a 1994 article in the Times of Northwest Indiana, Mint spokesperson Michael White attributed the cent shortage of the 1980s to rising copper prices, according published in response to another cent shortage in the 1990s. 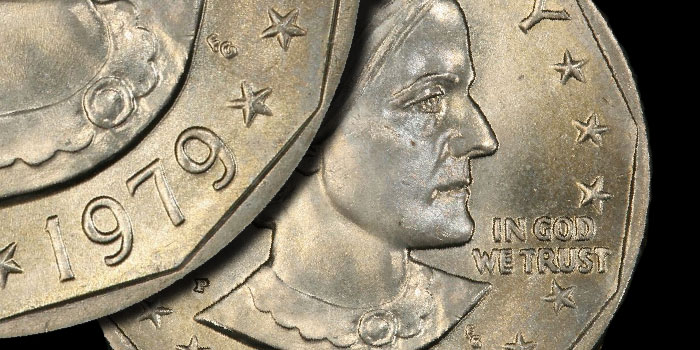 Creative sources of copper were suggested. On June 25, 1980, legislation was introduced to the 96th Congress by Rep. Lawrence McDonald (D–GA7) calling for the unpopular Susan B. Anthony dollars to be melted and the copper recoined into cents. The bill never received a voter after being referred to the House Financial Services Committee.

Despite the increasing copper price and hoarding, the Mint continued striking 95% copper cents in large numbers in 1980, 1981, and into 1982.

A few years later, supplies of cents stabilized; UPI declared the “[p]enny shortage over” in 1984, attributing this to the change in the cent’s composition. The article quoted then-Mint Director Donna Pope explaining the value of keeping Lincoln’s profile and the Lincoln Memorial on the cent, especially in light of the compositional change in 1982: “…continuing the same design adds to the perception of monetary stability.”

As policymakers and consumers struggle with the possibility of eliminating the cent even today, the 1980 Lincoln cent offers collectors interested in the denomination’s history accessible examples of coins struck at another moment of uncertainty and change.

The Collector Market for 1980 Lincoln Cents

In uncirculated condition, 1980 Lincoln cents have a nominal numismatic value of about 35¢. This takes into account a dealer’s carrying and handling costs. BU 50-coin rolls of 1980 Lincoln cents sell for under $10 on eBay. A recent sale on the site placed the per coin cost at 16¢.

In certified holders, the market for 1980 Lincoln cents is radically different.

Prices for uncirculated 1980 Lincoln cents remain under $50 in MS-66RD, usually selling for between $15 and 25. MS67RD coins generally sell for between $100 and $150. A plus designation multiplies the value more than tenfold. An example certified MS67+ sold in a Heritage auction for $1,620 in September 2019. Another example in the same grade sold for $2,233 in the Heritage auction at the January 2017 FUN Show.

PCGS CoinFacts posts a price guide value of $8,000 for the sole 1980 cent. This appears to be a speculative price as there is no auction data to support this price. Given the approximately graded population of seven MS67+ cents in the PCGS population report, we believe that the 1980 Lincoln Cent in MS68RD guide price of $8,000 is high.

The 1980 cent presents one major doubled die variety, referred to in Fivaz-Stanton’s popular Cherrypicker’s Guide as FS-101. This 1980 DDO displays “strong doubling is evident on the date and LIBERTY”. According to Fivaz and Stanton, heavy die polish is discernible on the reverse below the Lincoln Memorial.

The edge of the 2003 Lincoln cent is plain or smooth, without reeding or lettering.