By Roald Versteeg for CoinWeek …..

Pirates and buccaneers have captured the imagination of the world for centuries, the most infamous cutthroats of their day, larger than life, and the scourge of nations. With swashbuckling tales, murder on the high seas, daring heists, revenge, and most of all – Pirate Coins and treasure – they are the stuff of legends.

This week, 300 years ago, marked the beginnings of the end of the “Golden Age of Piracy” in the New World, with the fall of the last major pirate haven – Nassau. A period that spanned more than a century was coming to a close, not with a bang – but with a whimper. On 24 July 1718, Woodes Rogers had arrived at Nassau to offer clemency for all piratical offenses, provided that those seeking the “King’s Pardon” surrendered by no later than 5 September 1718. Despite some resistance, Woodes Rogers landed in Nassau on 27 July 1718, with the vast majority of pirates accepting the King’s Pardon, giving Woodes control of Nassau within days of arriving.[i]

The Golden Age of Piracy was a fairly brief period in history. The precursor to the Golden Age of Piracy commenced with state-sponsored privateers, like the Elizabethan “Sea Dogs” and the Dutch West India Company Privateers (e.g. Francis Drake, John Hawkins, and Piet Heyn) circa 1563 to 1620.[ii] [iii] [iv] These first privateers demonstrated that significant profits could be achieved, even with significant loss of life and ships, by raiding Spanish towns and commerce in the New World. Of course, in addition to such state sponsored privateering, there were also many examples of outright piracy during this early period.[v] The buccaneering period followed, with letters of marque providing a veneer of legitimacy for privateers, or so called buccaneers (like Henry Morgan, Daniel Montbars, Richard Ingle, Christopher Myngs, [Right] and Marquis de Maintenon). The period spanned from around 1640 to 1690.[vi] The Jamaica Station, Tortuga, and various other colonies – including Massachusetts Bay[vii] – provided bases of operations and letters of marque for privateers and buccaneers to attack enemies of the sponsoring state. The Spanish were usually the target, but letters of marque also extended to the English, Dutch and French. Unfortunately, the raids were not always carried out with the consent of the governor issuing the letter of marque, nor the sponsoring state.[viii]

Finally, in fits and starts, the transition from state-sponsored explorer to privateer/buccaneer, to outright pirate had occurred by 1714. Following the mass unemployment of privateers and buccaneers at the conclusion of the Spanish War of Succession, these paramilitary battle-hardened sailors either sought honest work on land or sea or ditched all pretense of legitimacy and turned to outright piracy.[ix] This final period saw many famous pirates, including Black Beard, Charles Vane, Stede Bonnet, and Calico Jack. Although dangerous, piracy was incredibly lucrative. For example, “Black Sam” Bellamy [LEFT] reportedly plundered 400,000 coins in the weeks before his ship, the Whydah Galley, was shipwrecked in a storm.[x] Similarly, John Wills and Henry Jennings managed to seize 120,000 pieces of eight in a single raid during the salvage of the 1715 treasure fleet.[xi]

However, with the full transition to illegal piracy, the Golden Age of piracy was quickly drawing to a close. The European powers were becoming more organized on the frontiers, and quickly tired of these pirates. Although never known as a particularly healthy occupation, piracy became downright lethal, with short and bloody careers. The classical notion of these career pirates in the New World ended by the mid-1720s.

The upshot for the potential collector

Who doesn’t want a piece of history from this fascinating period of time? Collecting “pirate coins” can be a rewarding experience, but beware – there is a lot of misinformation out there. Between the mountains of poor information available on the web, and sellers trying to maximize profits through misinformation, it can be a difficult task determining what one should be seeking.

Before determining what coins could be considered pirate coins, it is important to consider the timeline. As mentioned above, there were precursors to the Golden Age of Piracy, including both state-sponsored privateering and outright piracy. However, the generally accepted period for the Golden Age of Piracy commenced with the buccaneers and privateers, and concluded with the career pirates, spanning from around the 1640s to the mid-1720s.6[xii] Many would therefore say that you need to purchase a coin from this period for it to be considered as a candidate.

However, this view could be considered somewhat simplistic if taking into account the broader context and reality of both the period and trade coins used in the 17th and 18th centuries. It should be considered that both colonial cobs and trade coins (discussed further below) circulated for well over 100 years – often more – after minting, with little substantive change in the look, the feel, and importantly – the weight and purity. If it is accepted that the Golden Age of Piracy commenced in the 1640s and that coins circulated for more than 100 years, the acceptable lower date range shifts significantly.

In terms of the upper date range, career pirates had become few and far between by the mid-1720s. Some argue that the Golden Age of Piracy in the Caribbean lasted until 1730[xiii], but there is little evidence of career pirates in any great numbers after 1726 (other than Jean Lafitte and Roberto Cofresi, who were 19th century pirates and well beyond the time period in question).

Bearing the above in mind, one would reasonably conclude that both cobs and international trade style coins from the late-1500s to the early to mid-1720s, would fall within the desired range.

The candidates for pirate coins hinge on two important considerations:

Bearing the above in mind, the first candidate for pirate coins would be Spanish cobs. This is due to various reasons, including that Spanish shipping was the most usual target of privateers, buccaneers, and pirates.[xiv] Additionally, Spain had close to a monopoly on large areas of the New World, including Central America, South America, and the Caribbean. As such, Spanish colonial cobs circulated in significant numbers in and between the Spanish colonies and Europe.[xv]

However, there are other coins that could be considered as candidates for pirate coins, as Spain was not the only country with a trade and/or colonial presence and was not the only target of privateers and buccaneers.

Although it has been estimated that up to one-half of the circulating coins in the English colonies were Spanish Reales, other foreign coins also circulated – especially Dutch coins. Despite the fact that Dutch coinage in the colonies is often under-recognized, coins from the Netherlands were in fact quite common. 15[xvi]

One could also argue that any silver coin (especially trade coins), or gold coin, from a European power (particularly one present in the New World for the period) could have been in the hands of a pirate at some stage.  Although not covered in this overview, if considering other French, Dutch, or English coins of the period, possible candidates include:

Any cob, silver, or gold struck between the late 1500s and the early 1720s can be considered as ticking all the required boxes.

However, in terms of pirate lore, one cannot go past the “Doubloon” and the “Pieces of Eight”.

There is some disagreement on whether the “Doubloon” is a double escudo (i.e. 2 Escudos) or a double pistole (a pistole being 2 escudos, so therefore 4 escudos).[xvii] [xviii] Either way, both cobs are highly collectable and come at a premium. Both candidates for the doubloon are covered below. The bar silver and the arms still lie, for all that I know, where Flint buried them; and certainly they shall lie there for me. Oxen and wain-ropes would not bring me back again to that accursed island; and the worst dreams that ever I have are when I hear the surf booming about its coasts, or start upright in bed, with the sharp voice of Captain Flint still ringing in my ears: ‘Pieces of eight! pieces of eight!’[xix]

The 8 Reales, or “Pieces of Eight”, was struck at 27.07g, 0.931 fine silver. Any 8 Reales cob from any mint can be considered as a strong candidate for a pirate coin. However, both the Potosi mint and the Mexico mint produced huge numbers of these cobs, which makes them a relatively accessible to the average collector. 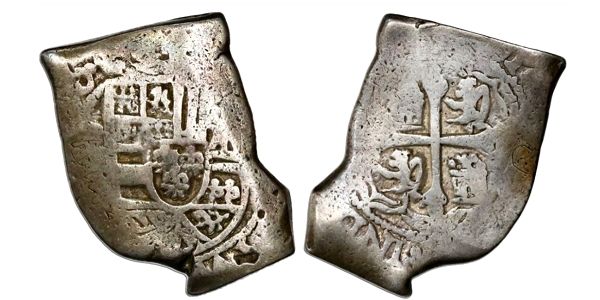 The Leeuwendaalder was struck at 27.68g, 0.750 fine silver, and was produced in significant numbers and used for trade worldwide. Although not often considered as a candidate for a pirate coin, it was commonly seen in many English and Dutch colonies in the New World. What constitutes a ‘pirate coin’ is of course subjective. However, purchasing the correct type of coin within the correct timeframe at least increases the likelihood that it could have been a pirate coin.

Notwithstanding the above, unless you’re purchasing a salvage coin from the Whydah Galley, there is almost no way to be certain that any purchased coin was actually a pirate coin at any point in its life.

[x] Associated Press. (2013) Is pirate treasure lost 300 years ago in shipwreck buried at the end of a ‘yellow brick road’ on the bottom of the sea? [ONLINE] Available at:

[xii] Cordingly, D. (1996). Under the Black Flag: The Romance and Reality of Life Among the Pirates. Random House