So, here we are after my “last” installment of this series. In that one, I stated: “that’s it for now – but should we find another TPG-authenticated variety not discussed previously I will add a new Dark Corner article.” And now I would like to discuss an example with an amazing “secret” hidden right in front of my face, as well as in the face of Miss Liberty.

And as I have in all of the previous articles, I will start with one of the certified “Dark Corner” examples, my 1796 “S-85” large cent:

This “coin” is one of the first we saw in a group of very deceptive struck early copper counterfeits from a known group of internet venue sellers and called a counterfeit due to irregularities seen as compared to a genuine example. It wasn’t until it was “authenticated” that I took a closer look and was amazed at what I saw!

The first thing that stood out to me was the apparent “doubling” of “ONE CENT” above and to the left of the initial impression. On further review it was apparent it wasn’t the same as the ’96 lettering.

As a side note, it has been my and some other colleagues’ theory that initial examples of the early copper counterfeits were struck on cull large cents; we knew that the sellers had actually purchased a couple of lots of culls from the same internet venue. And I had several of the struck counterfeits XRF-tested (two levels) at a metallurgical testing facility along with known genuine examples of a similar date. The testing matched the counterfeits to the genuine examples for metal element content, but I still didn’t have the “smoking gun” of observable undertype until now.

Another side note, the counterfeit half cents did NOT match genuine same-era examples, although there was a direct link between counterfeits. That, however, is another story.

In my EAC April 2022 Penny-Wise article, I discussed the S-85 counterfeits and the undertype of this example in a more extensive review beyond this Dark Corner article.

In the research leading up to the article, a friend asked: “How could that one be certified with the star in front of Liberty’s face?”. Collaboration with friends created this rendering of what we were seeing on the obverse: A CAD drawing of the 1843 large cent overlaid on this “1796” shows the features and lines up well with the two: And the reverse CAD renderings: 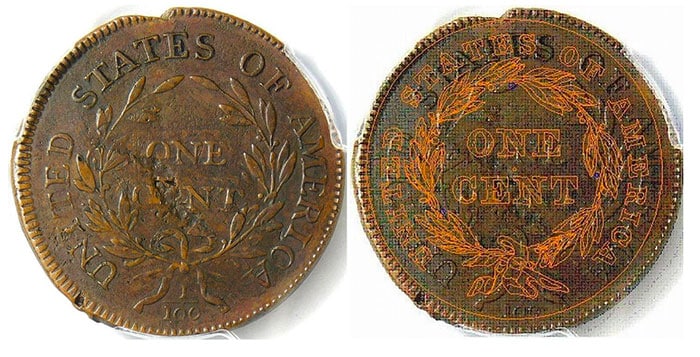 As another friend stated, unless you had a Delorean, how could this have been made?

As always, the research on this one and all of the others has been a team effort, with friends and fellow members of Early American Coppers (EAC) and the Dark Side Group on Facebook instrumental in the effort as well as others – including my wife (who puts up with me and this)!

And again, should you see one “out there” report it! There are several unaccounted for…