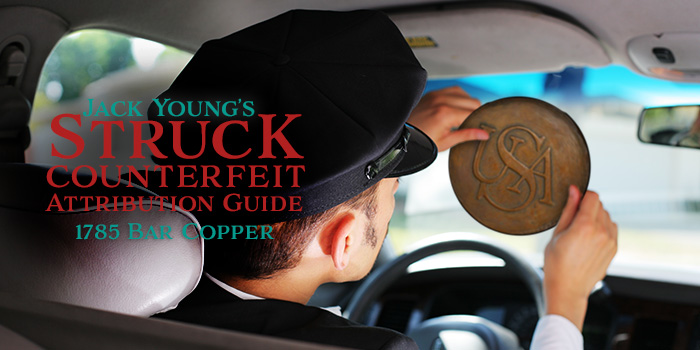 This is only my second article regarding counterfeit Colonial “coins”, following one published here on CoinWeek concerning struck fake Massachusetts half cents, and the same process of other recent (within the last several years) deceptive struck early coppers believed to be Chinese in manufacture. This new counterfeit appears to be from an earlier time, prior to the current level of technology and most likely domestic in origin! This article is intended as another installment in a series disclosing deceptive counterfeits and establishing one-page attribution guides for each; the research continues to be a collaborative effort with many participating numismatic club, Facebook “Dark Side” members, and friends participating. This story actually starts with excerpts from a 1979 article written by Eric P. Newman for The Numismatist. In that article, Newman documents and discloses several of what he considered to be deceptive cast counterfeit Colonial “coins”. This current article focuses on one of the eight varieties discussed there, the “1785” Bar copper (research in the works for future articles from Newman’s work!).

From there, fast forward to Long Beach in 2016, where a small group of “Colonials” in TPG slabs were being offered for sale. A noted expert on Colonial coinage viewed the group and immediately called them out, referencing the imaged examples in the past Newman works. I was told these “go way back … these fakes were first attempted to sell in the 1978 ANA sale. We had them pulled at the time. Eric Newman wrote an alert story (illustrated) in the April 1979 Numismatist. They apparently got sent to the TPG recently…”

From there the “coins” disappeared – only to reappear listed in a popular internet buy/sell venue; members of our Facebook counterfeit watch site the Dark Side posted them for review like the recent struck early copper fakes we have been chasing, and the discussion was on!

Matching the marks on the slabbed example to the Newman article specimen was easy, and a discussion ensued with the seller of this “new” one. Eventually the group, including the Bar copper, was returned to the TPG under their guarantee, and this example remains there for reference (verified just recently).

Image comparisons of the two examples as follows: 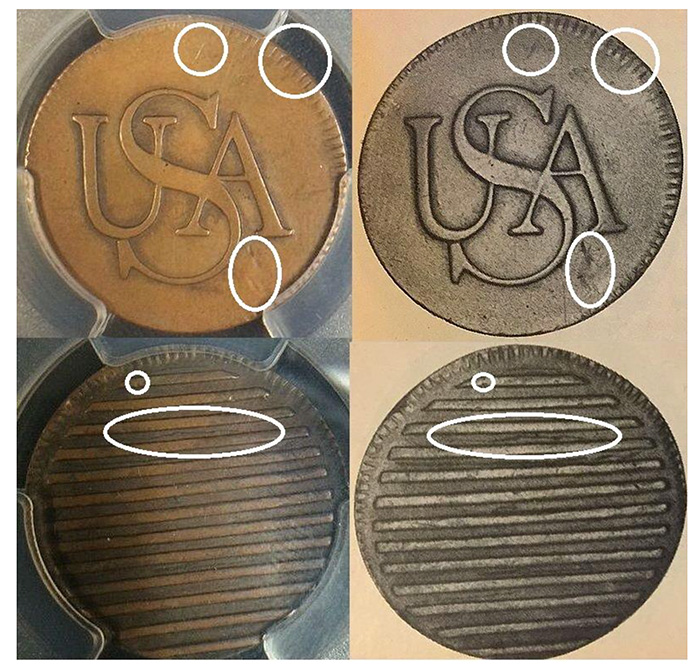 Again, things went quietly with this one, but our group is pretty vigilant and a second example surfaced on the same internet venue from the same seller. The same process began, and although there are noticeable differences the main matching sister marks were observable with this new example. The seller was notified, discussion continued over several emails and ultimately site administration terminated/removed the listing. As in previous investigations, a time-line proved helpful in organizing the subject examples: 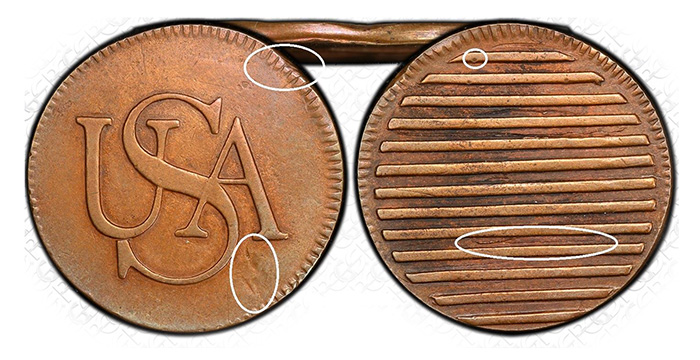 In this image the planchet defect common to all is very evident on the edge view.

One of the initial steps I take in investigating an interesting “coin” is to compare it to images of a known genuine example. There are many outstanding coin-related web sites to use as resources to this end (auction houses, TPG sites, etc.). In this case I found a similar example of the same variety on a fellow Early American Coppers (EAC) member’s web site and created the comparison images as follows: Reviewing these images and an overlay of both shows no noticeable differences in the main elements of these, attesting to how deceptive the counterfeits are relative to a known genuine example. But when compared to each other, the truth becomes apparent!

And then the second example in a week turns up in another TPG submission package: Note the number of matching marks, including the edge “dent”!

I can again report this investigation has been a collaborative effort with several EAC, Colonial Coin Collectors Club (C4) members and “Dark Side” participants (our focused Facebook group of counterfeit researchers) instrumental in the sharing of pics and info in the effort to “get the word out”, and I would like to thank you! Again I’ve drawn no conclusions about which is real or which is “Memorex”, but am convinced more than one of these is counterfeit. I would ask that the readers be on the lookout for other duplicate examples and REPORT them – remember, the truth is out there!