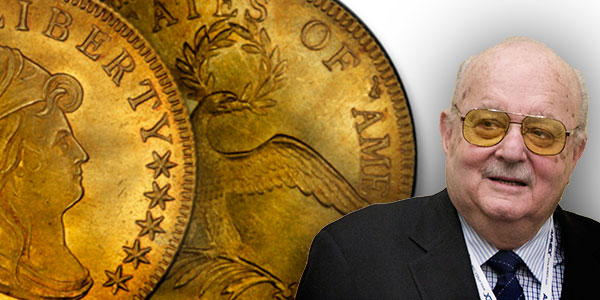 In this article I continue my thoughts on rarity by stating that you cannot make a rarity and that trying to usually results in failure. Trying to manipulate supply and demand rarely ends well for those involved. This is especially true if one attempts to do this as a means to control the market for personal gain and not with the goal of owning and enjoying a coin or other collectible.

I would like to share what happened while I was serving R.L. Miles, Jr., of Norfolk, Virginia – how he started collecting, how he concentrated on the hobby, and how he singlehandedly created a shortage of certain dates of Proof Barber half dollars.

R.L. Miles, known as “Skinny” during his youth due to his height and thinness, started collecting when he was in his early teens as a cashier in his family’s business, J.H. Miles, & Co., owners of one of the largest oyster farms on the East Coast, employing some 1,000 shuckers. As he went through change he found many interesting coins for his collection and set aside different dates from cents to half dollars. He had an advantage similar to what a cashier in a bank might have, or a toll taker. If he found a coin he did not have, he placed it into his album and if he found a better one he exchanged it. His collection was assembled during the three decades following World War II. As he grew up and was active in running the family company, he continued collecting. Additionally he had a “private” hobby, seeing how many Proof half dollars of 1914 and 1915 he could assemble. He had developed a fascination with Barber half dollars. He found them occasionally in his change, but not like later date coins. He did fairly well filling out his collection, but became aware that 1914 and 1915 half dollars just did not show up. Checking Mint records, he learned that around 100,000 were made each year in Philadelphia for circulation (the lowest number of a date and mint of the series), with only 380 Proofs in 1914 and 450 Proofs in 1915. They have to be scarce or rare, he thought. He went on to bid on and buy many of these Proof dates as they appeared in auctions across the country. He had the financial resources to buy duplicates and found it challenging to see how many he could find. Eventually he amassed over 250 of each date in Proof condition.

His coin collection provided him with much enjoyment and as a director of the Virginia National Bank in Norfolk, he placed his collection on display so that the public, including collectors and schoolchildren, could appreciate it, learn from it, and maybe take up numismatics themselves.

After a quarter of a century of dedication to his collection, he decided to offer it for auction through Stack’s. When his vast collection of U.S. gold, silver coins, from 1793 to 1970 re-entered the market, his accumulation of Proof 1914 and 1915 half dollars also crossed the auction block. However, while the price had gone up for these items while he held them, the appearance of so many on the market caused a drop in price. Not down to the price of other Proof Barber half dollars, but close.

So, Skinny’s attempt to hoard Proof half dollars of these dates was not necessarily rewarding financially, although it seemed to be an enjoyable challenge to undertake. There were not enough collectors interested in this particular specialty at the given time to significantly increase the demand or to absorb Mr. Miles’ “supply” at the higher price level. But the balance of the vast R.L. Miles Collection, systematically assembled over the years, brought him great financial reward. He told me that he had learned his lesson: that market forces are market forces and cannot be arbitrarily controlled.

Keeping this in mind, let’s review what the Hunt Brothers did from the mid-1960s until about 1981. First they bought up silver, mostly in bars, and drove the market from $1.29 to nearly $4 per ounce as they kept bidding in quantity on the precious metal markets and even traded on future markets. The Hunts were billionaires and felt they could control the silver market. At the same time they started to accumulate Silver Certificates in huge quantities and were able to exchange lots of $10,000 in currency for silver from both the U.S. Assay offices and the Treasury. A hunt began to find Silver Certificates that had been turned into banks and sell them at a premium to the Hunt Interests. These purchase were all legal until the government would not redeem silver certificates for silver ingots in the late 1960s.

Next the Hunts turned to silver coins, primarily of the United States. In 1964, due to advancing silver prices, the U.S. government had stopped making dimes and quarters out of silver. The new composition was of lower-cost metals and there was no benefit to melting them down. From 1965 to 1970, the Mint struck half dollars in a composition composed of only 40%, as opposed to the earlier coins prior to l965 that were struck in 90% silver. In this way they tried to maintain some intrinsic value in these larger coins.

As silver rose in price, dealers and traders started buying up dimes, quarters, half dollars and silver dollars from 1964 and before, primarily 20th-century issues, in order to melt them for their silver value. Though there was no law about melting U.S. coins in existence at the time, the Mint complained and tried to use enforcement of restrictions on “mutilation” of silver coins to stop the melting, especially from 1967 to 1969. However, as it was not a law, they failed and the melting continued.

During that period, the Hunt’s buying all they could drove the price up each year, and the accumulation of silver coins became more hectic. Coins that were stored in banks, dresser drawers, piggy banks and elsewhere were turned into dealers at premiums that started as low as two to three times face value, but by 1980 could be as much as 20 to 30 times face value. Melting was done on such a huge scale that there was concern that there would be far fewer silver coins in the future to collect or use as a store of wealth.

Among the coins melted were Barber dimes, quarters and half dollars, Morgan and Peace dollars, Mercury and Roosevelt dimes, Liberty Standing and Washington quarters and Walking Liberty and Franklin half dollars. Collectors found it more and more difficult to find high grade circulated coins in change to add to their collections. So the value of circulated issues of these series started to advance in price.

A slump occurred in the hobby, as it became too costly for many to continue.

Then in the latter part of 1980 and early 1981, the Hunt Brothers were unable to keep accumulating silver. By then they had driven the price in the basic trading markets to over $50 an ounce, and in the speculative market to almost $60 an ounce. People started to sell and sell and sell, and the Hunts and their associates could not purchase the quantity of silver being offered, and the price dropped like a stone. It did not really stabilize until it reached $10 an ounce or less, resulting in great financial losses–including many bankruptcies. Some had silver bars while others had paper futures contracts. Still others retained silver coins and a major collapse occurred. Fortunes and life savings were lost. Some of the coins that had escaped melting returned to the market and were available for collectors. Those who had speculated that all silver coins were going to become rarities in the future found that their dreams had collapsed.

So you cannot control the market and make something rare. Markets are always determined by supply and demand, and once the supply returns or the demand lessens, a “rarity” can become common again. However, one result of the debacle with the Hunt Brothers and the silver market was that many collectors left the hobby.

In my next article in this series, I will discuss how newly discovered supply can negatively affect a market.