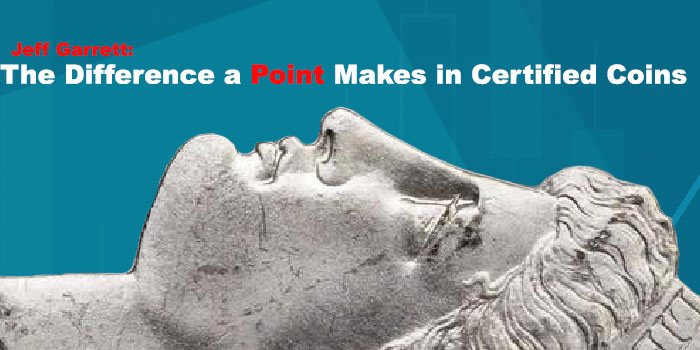 With the popularity of online set registries, coin collecting has become a competitive sport

Sometimes one point is insignificant. Your credit score might be 720 or 721, but the one-point difference really doesn’t matter much. On the other hand, if the Super Bowl is tied, with seconds left in the game, and the kicker needs to make the extra point after a touchdown, that one point means everything.

Most people may not consider rare coins to be quite on the scale of a Super Bowl, but in numismatics, one point can indeed make a huge difference. The price jump from one grade to the next can mean six-figure amounts. Does one point really mean that much? For some, the obvious answer is yes!

One of the biggest differences between European and American numismatics is the hyper-focus on quality. The high-end of the American market is currently dominated by collectors who compete with each other in set registry programs. These collectors build sets and post them online with the goal of moving up in rank.

Decades ago, rare coins traded hands based on grades such as Extremely Fine and then Uncirculated. There was nothing in between. The introduction of Almost Uncirculated was deemed radical. It was not until the mid- to late 1970s that the American numismatic community adopted the Sheldon 1 to MS 70 grading scale. It was another decade or two before the MS scale was broken down point by point.

Many thought it impossible to be so precise; however, numismatic items trade hands today with significant value changes based on each point. A common date MS 66 Morgan dollar sells for around $200, while in MS 67 the same coin brings about $750. In MS 68, the coins bring nearly $5,000. This scenario plays out with nearly every popular series of United States coinage.

Several years ago, NGC and PCGS upped the grading game ante by adding Plus (+) designations to the menu of grades given on submissions. Many old-school collectors and dealers probably think it is beyond impossible to judge coins so precisely, but the market seems to have embraced the move. The clear price differences coins bring at auction illustrates the success of the addition of Plus grading. My experience has been that the plus designation adds about 20% to the value of most coins.

One of the best pieces of advice ever given to collectors is “buy the best you can afford.” The theory is that over time higher-quality coins will outperform lower-quality selections. This has most certainly been the case over the last few decades. I would never have dreamed of some of the prices that super Gem coins bring at auction. A few decades ago, the idea that a Franklin half dollar could be worth $100,000 would have seemed ludicrous! Yet prices such as this are now almost commonplace. This is especially true with series that are popular with set registry collectors, such as Lincoln cents, Buffalo nickels, Mercury dimes, Washington quarters and Walking Liberty half dollars. There are hundreds of individuals attempting to assemble high-grade sets of these series. The competition is fierce for superb examples.

The advent of registry collecting has had a tremendous impact on numismatics. Now collectors not only attempt to complete sets, but they compete with others doing the same. It is probably the biggest boost to coin collecting since the Penny board concept sparked a surge of collecting in the 1930s.

In my opinion, the rare coin market would be in a much different state if not for set registry collecting. Most demand for high-grade United States coinage is based on collectors competing in this arena. One collector alone has invested over $200,000,000 in the last several years in his attempt to beat the Louis Eliasberg “all-time best collection” status.

From Private Hobby to Public Spectacle

In the past, most collectors quietly built their sets in relative privacy. Some famous collectors, such as John Ford, were actually super-secret about their holdings. Only when they passed away did the numismatic community discover the extent of their collections. Conversely, modern-day collectors want to complete their sets and have the highest-ranked set possible. Many of today’s great rare coin collections are listed in registries for all to see.

This very public competition for the finest sets has created astounding prices for many of the most popular series, which might seem like a bubble or, in some cases, bordering on insanity. However, while there are isolated instances of seemingly crazy prices, for the most part, the demand for these popular series is broad and deep.

Indeed, only the collector can judge the value of having claim to the top set!

There is also some value added to assembling a pedigreed set. As I have covered in a previous article, coins from a famous collection will bring a premium when offered for sale.

And now for the final point…

Rare coin pricing is more complicated than ever. The value of a coin usually depends on simple supply and demand. Now, some rare coins can be driven to new heights by the intangible of how much even one point can help in the pursuit of the finest set ever assembled. Also, collectors are more willing now than ever to pay substantial premiums for coins with amazing color and superior eye appeal. Rare coins are less often viewed as commodities and more as works of art. Certainly, buy the best you can afford, but now do so with a special emphasis on quality for the grade.