The Act also changed the face (literally) of U.S. coinage by eliminating the half cent and ending the production of the “large cent”.  Rising production costs had eaten into the Mint’s profits and Congress instructed Director of the Mint James Ross Snowden, to submit a new cent design to the Treasury Secretary.  The new cent was to measure seventy two grains (4.67 grams) down from the 168 grain mass of the Coronet cent (1837-1857). 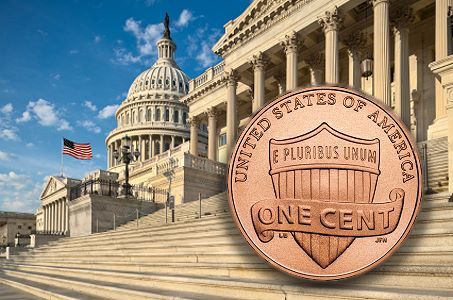 The design that was chosen was a modified version of Christian Gobrecht’s Flying Eagle pattern, with a wreath reverse designed by Chief Engraver James Barton Longacre. In patronage to Pennsylvania industrialist and nickel producer Joseph Wharton, an alloy of 88% copper and 12% nickel was chosen. Wharton’s influence over the production of coins continued as he was able to lobby the introduction of two additional coins in nickel: a three cent piece (produced from 1865-1889), and a new heavy-weight five cent coin which debuted in 1866 and became known as “The Nickel”.

The fact that such new denominations of coinage were introduced in the 19th century speaks not only to the importance of U.S. coinage but also to a Congress that took a proactive stance towards the country’s monetary policy (even if that meant political payoffs to the well-connected). In total, six new denominations were introduced. Compare this to the total of new coin denominations in the 20th and 21st centuries – zero – and you begin to see the problem at hand.

When the half cent and the large cent met their shared demise in 1857, the United States was producing a total of 13 coins, ranging in value in 2012 dollars from 17 cents (the half cent) to just shy of $700 (the double eagle). It‘s worth noting that this period was known as the “Free Banking” era, when the Federal Government did not have a central bank and didn’t print paper currency. Therefore, all paper currency produced during this period was privately made and issued through state-chartered banks against specie, making the higher denomination gold coins necessary for the conducting of business in the broader economy.

When compared to currently circulating coinage, the 1857 half cent was worth more than the 2012 cent, nickel, and dime combined. Our current quarter dollar, the heavy lifter of contemporary coinage, is worth less than an 1857 cent, and our scarcely circulating dollar coins carry slightly less value than the 1857 trime (three cent piece).

The fact that an 1857 cent was worth more to its contemporary consumers than our largest heavily circulating coin, the quarter, serves as a stark condemnation of the failure of our government to adapt and change coinage to meet the demands of the modern world. And while the government, even in the 19th century, has never had a particularly good track record introducing and supporting new denominations, there has never been a more obvious need to reinvigorate U.S. coinage than right now. Refusal to act will result in the continued diminishment of the role of coins in commerce and to the eventual obsolescence of the Nation’s first currency.

My advice to Congress is to think rationally, not emotionally. Many observers assumed that 2009, the 100th Anniversary of the Lincoln Cent, would be the last year of production for the now nearly valueless denomination. Instead, Congress enacted legislation to redesign the cent’s reverse to the current “Shield” pattern.[iii] The new “Shield” reverse looks like an afterthought, and the coin has never looked as “cheap” as it does now. Eliminate the cent and transition the country into rounding all transactions to the nickel.

Since a nickel now costs almost twice as much as its face value to produce, a change in composition is due. The Mint is testing an aluminum alloy that would be cheaper to produce. If the new alloy works out, it will breathe new life into the five cent denomination as it begins to carry the burden left to it by eliminating the cent.

There’s no need to change the dime or the quarter, but the half dollar, awkwardly large for a coin with no intrinsic metallic value, needs to be reintroduced into the circulating stream. Perhaps it can be resized and re-metalled; if the new half was made roughly the size of a quarter, colored somewhat similarly to the dollar coin, and given a thicker crimped or some otherwise different style rim, it would circulate better and not be a nuisance to those who don’t want to deal with the larger, heavier version.

Speaking of the dollar coin, it has struggled in large part because it has to compete with the dollar bill. The cost benefit of using long-lasting dollar coins, as opposed to the dollar bill and its shorter lifespan, is tremendous. A bold Congress with a clear strategy for the future of our circulating money should be able to make these things happen. Eliminating the greenback without such a plan would simply be a propaganda defeat for the Dollar globally.

I also recommend the elimination of the non-circulating two dollar bill and the creation of new circulating quarter eagles ($2.50), along with the production of collector’s-only half eagle ($5.00) and eagle ($10) coins. The three new denominations would signal Congress’s and the Mint’s commitment to the future of U.S. Coinage. The new quarter eagle would circulate well after the elimination of the dollar bill and be a powerhouse denomination for vending-machines and change-making.

By creating collector’s-only half eagle and eagle coins, the Mint and the Treasury could begin the process of reintroducing large denomination coins to the public by first capturing the imagination of collectors and hobbyists. When, in the future, it becomes necessary to circulate these larger coins, the public will already be familiar with them.

However, even if Congress does authorize the production and distribution of a new circulating eagle coin, that coin would have less purchasing power than an 1857 half dollar. Think about that the next time you rifle through your pocket for loose change.

[i] The entirety of the Act can be read at The Library of Congress’s American Memory website, http://memory.loc.gov/cgi-bin/ampage?collId=llsl&fileName=011/llsl011.db&recNum=184.

Currently Charles is working with his colleague, Hubert Walker on The Coin Collector’s Registry Set Guide and a children’s coin collecting primer, Curious Coins. He is also working with Rob Ezerman of the Ike Group on Gradeview™: Eisenhower Dollars.