It was a hard fight, and many of us didn’t get what we wanted. No, I’m not talking about the presidential election. I am referring to the mad dash to the United States Mint’s website a few days after the election.

Of all the times that I have attempted to purchase a hot item from the US Mint, the servers have never seemed so overmatched or taxed so severely. I got all kinds of error messages, was blocked from the site, and had to repeatedly attempt two-step verifications like clicking on all the pictures containing boats. I was exasperated. Both coins sold out within minutes of their availability. 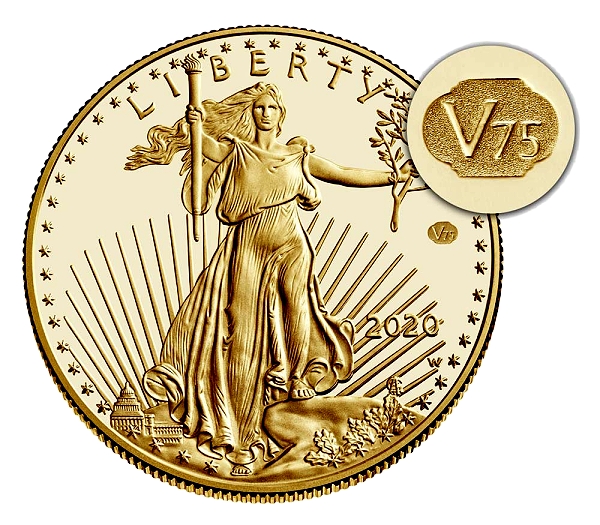 Although I was able to come away with the “V75” Silver Eagle for my efforts, hundreds of thousands of others weren’t so lucky.

Yet the symbolic “V75” privy mark stamped on the obverse of these American Eagles is what makes them truly unique collectibles and the wildly popular series that it is. The gold was priced at $2,600 and the silver at $83, each with a household order limit of one. Their release just a few days after the election and one week before Veterans Day was great marketing and timing. It likely brought more patriotic collectors out of the woodwork, all vying for these precious metal mementos. Adding to the barrage, many of the millions still working from home shifted their attention just before noontime.

Five days after their release, eBay sales data shows that nearly 4,000 “V75” Silver Eagles have been sold. Prices realized for the Silver Eagle have shown solid momentum with sealed and confirmed, or in-hand, coins bringing an average upwards of $550. The Gold Eagle is a true prize, commanding a somewhat mind-boggling $12,000 to $13,000 or more!

However, to put things in perspective on a percentage basis, the silver is bringing in 575% above issue price, while the gold is claiming around 400%.

One dealer on an electronic trading network had offered up 100 of the 2020 World War II Privy Silver Eagles last evening, and within 12 minutes of posting, they were all sold!

I spoke to Brian Timmons of the Harbor Coin Company in Gurnee, Illinois. He informed me that he sold that entire deal to a well-known California dealer at $650 per coin. Brian said that he has another deal around that size available. As of this writing, he is an active buyer at $550 per coin for the Silver Eagle and $10,000+ for the Gold Eagle.

“I’m usually able to leverage a little bit higher prices,” said Brian. “We have such a large group, and major traders don’t like to buy them one at a time on eBay.”

As for the gold, he has only four confirmed and considering that they are all local collectors, Brian is pretty sure they will be in to get their money.

I asked how he was able to acquire such a sizable inventory of the Silver “V75.” Timmons explained that the company has “engaged” a homegrown network of buyers as their US Mint connection.

“The network grew from our own employees; then employees’ relatives and their friends, customers, etc. And it just grew.”

This strategy has become a necessity for dealers since the US Mint has imposed order limits for a single coin or for sets on many of the very limited issues.

Concerning World War II Gold and Silver Eagles, Brian said, “They will probably have legs through the end of the year, but of course that demand could change at any time. Presently I think $650 to $700 for the silver and $12,000 to $15,000 for gold is right.”

He cautioned, though: “You have to watch eBay. If everybody starts sucking all the coins off eBay, the prices can go up really quickly.”

This “V75” tandem is a major force in the market, especially the silver coin. Everyone seems to be getting in on the act. I found one seller from New York on eBay who usually lists athletic shoes and associated attire. He sold an in-hand World War II Silver Eagle for $1,500.

Yet rather comically the seller, perhaps out of habit, listed “Brand New – Silver US Size 9 ½ New with Box” in the description.

In a conversation with well-known dealer Kevin Lipton, he, too was having a difficult time securing sufficient inventory. Mr. Lipton has several hundred Silver Eagles at this point, but the gold coins have proven to be very elusive, especially in-hand orders and confirmed orders from the Mint.

“Right now, I’m playing the silver game until I can get legitimate delivery on the gold,” said Lipton. “It’s going to be a huge collectible. There’s never been a counterpunch on a coin like this.”

Although Kevin is a wholesaler, he did have opinions on the retail market for the silver: “I think the PF 70 with premium labels, like the Reagan Mercanti First Day of Issue label, will retail for over $2,000.”

Lipton continued, “If someone were to offer me 100 “V75” gold coins, I would wire them a million dollars or more on delivery. That’s how strong the demand is.”

“Most of the buyers were young profiteers, and there’s nothing wrong with that. God bless America, and let them make money. Would I have liked to make all that money? Sure, but like anybody else, I will play whatever game I am dealt.”

Want to see more articles like this on the coin market? Subscribe to the free NGC Weekly Market Report.