While the country at large’s desire for a large dollar coin at the start of the 1970s was hardly demonstrable, the gaming industry developed an acute need to find a replacement for the silver dollars it used to feed tens of thousands of slot machines. This “need”, and the recent passing of beloved war-hero-turned-President Dwight D. Eisenhower, presented Congress with an opportunity to cater to the needs of the industry. While United States Mint Director Mary Brooks lobbied for the coin to be struck in silver, Congress instead chose to strike the coin for circulation in the same copper-nickel (Cu-Ni) clad composition in use for the dime and quarter dollar. In a compromise, silver-clad versions were authorized to be struck and sold to collectors.

The striking of silver-clad Eisenhower dollars for collectors was controversial. Not only was the cost charged by the United States Mint for the coins excessive, but a portion of the proceeds from the sale of the collector versions was earmarked for the recently-established Eisenhower College in Seneca Falls, New York, which, thanks to Public Law 93-441, was set to receive a dispersal of “one-tenth of all the moneys derived from the sale of $1 [Eisenhower] proof coins”, with 10% of the total moneys received by the college being transferred to the campus’s Samuel Rayburn Library, with a maximum allocation of $9 million. In 1975, Congress raised that number by authorizing an additional appropriation of $1 million (Public Law 94-41). In terms of strike and quality, the 1971-S is the poorest of the Blue Pack Ike dollars. The substandard quality of the typical coin must have come to the attention of the United States Mint before the coins were offered for sale because packaged along with each silver-clad business strike coin was a special insert that clearly specified that no special care was taken during the production process. 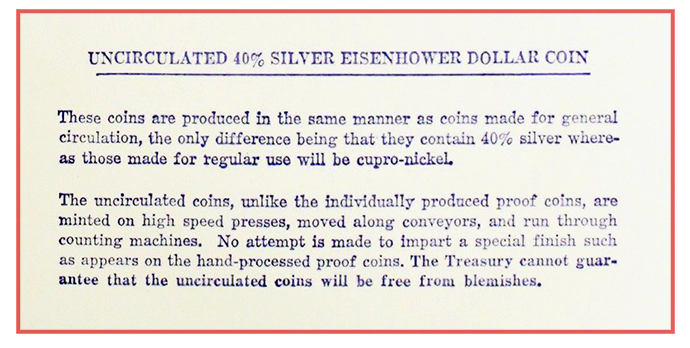 This fact is born out on each and every 1971-S Ike dollar that you will ever find, certified or uncertified. While the typical 1972-1974 Blue Pack Ike should grade in the MS66 to MS67 range, with excellent specimens earning MS68 and in rare instances MS69, the typical 1971-S Eisenhower dollar in the raw falls in the MS63 to MS65 range. The NGC and PCGS populations, which are comprised of pre-screened coins, typically in the higher register, bear this out.

Having personally seen three of the four, we can report that the PCGS 68s are not of the same quality as 67s for the 1972-1974 issues. It is our belief that none of these pieces would CAC. Furthermore, some MS67+ certified by PCGS could, in our opinion, upgrade to MS68 and be on par with, if not be superior to, three of the four coins in PCGS MS68 holders.

The market price for a 1971-S Eisenhower dollar in original government packaging is approximately $12 USD. Although the coin features less silver than a traditional silver dollar, the value of a 1971-S Eisenhower dollar in its original packaging will rise and fall depending on the price of silver. In certified grades, the coin can trade for considerably more. At MS65 and MS66, the 1971-S sells on online markets, such as eBay, for $18 to $25. The jump grade is MS67, where coins bring $250 and up, depending on eye appeal, CAC approval, and other factors. The record price paid at auction for a 1971-S Eisenhower dollar (non-variety) was $6,900, which was hammered in March 2012 at a Heritage auction. The market price for PCGS MS68 coins has trended downward in recent years as the population doubled from two to four pieces. The FS-401 variety is known by generalists as the “Peg Leg” variety. Researcher Rob Ezerman dedicates four chapters of Collectible Ike Varieties to a discussion of the Peg Legs, which also appear (with great frequency) on the Proof issues of 1971. Ezerman calls the FS-401 the Fading Peg Leg and differentiates it from the non-FS-401 “Straight Peg Leg” variety.

If Ezerman is correct, then approximately 100,000 to 150,000 examples of this variety were struck. This estimate might be an overstatement by degree, as to date, only 367 have been certified by PCGS and five by NGC. Certified populations on modern coins can be misleading, however, as it’s highly doubtful that much of a market would exist today for even 5,000 examples of this variety in certified holders.

Diagnosing an FS-401 Fading Peg Leg is fairly straightforward. The lack of serifs is most apparent on the base of the E, the back leg of the R, and the left arms of the T and Y. One of two known FS-401 dies features obverse die doubling. The DDO is notched at the tips of the U of “TRUST” and the base of the O and D of “GOD”. The non-DDO FS-401 will sometimes appear coupled with a Doubled Die Reverse.

The 1971-S Eisenhower FS-401 trades for about $40 in original government packaging. Certified examples in the top population grade of MS67, certified by PCGS or NGC, trade for about $300.

The FS-501 “S/S RPM” is a Cherrypicker’s Guide variety and one of the best-known RPMs of the short series. The repunched mintmark is clearly visible under a loupe on coins struck with fresh dies but can be difficult to differentiate as the dies wear down.

Fortunately, a major marker exists to the left of the T in TRUST and above 1 in the date in the form of a pair of diagonal line segments. This marker can be seen through the pliofilm packaging of a blue pack Ike dollar and is a very easy naked-eye pick for specialists.

The 1971-S Eisenhower FS-501 trades for about $40 in original government packaging. Certified examples in MS66, certified by PCGS or NGC, trade for about $200. A single MS67 is reported in the PCGS population census. This coin sold at Heritage for $8,813 in January 2016. The presence of a second (or third!) example in this grade would likely halve the market value of that specimen. Frank Gasparro’s portrait of Dwight D. Eisenhower (as President); Eisenhower facing to the left. Gasparro’s initials “FG” appear raised in the bust truncation. Beneath Eisenhower’s chin, to the left, is the motto “IN GOD WE TRUST” LIBERTY wraps around the top of the coin in the space between the rim and the top of Eisenhower’s head. The date wraps around the bottom of the design, between the rim and the bottom of Eisenhower’s bust truncation. While Philadelphia-struck pieces bear no mintmark, coins struck at Denver and San Francisco will bear small mintmarks of “D” or “S” above the space between the last two digits of the date. On Eisenhower dollars, mintmarks were hand-punched and may vary in exact location and orientation.

The reverse is based on astronaut Michael Collins’ Apollo 11 Mission Patch design.

The edge of the 1971-S Eisenhower dollar is reeded.