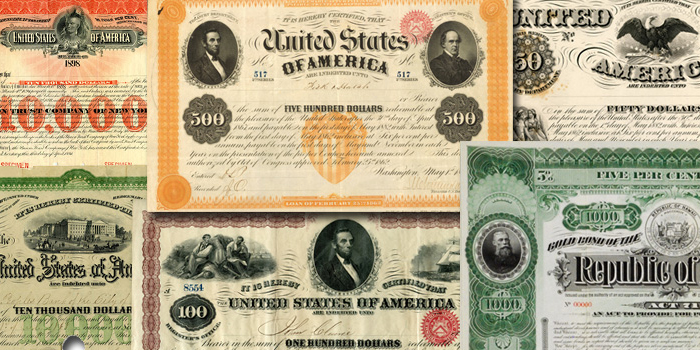 When our Stack’s Bowers Galleries’ clients, scholars, John’s friends and family and others glance at or study closely the pages of this catalog section, they are witnessing the ongoing passion of a transformative collector in this or any other era. Though we convene this event at the ANA World’s Fair of Money, the following 101 items, many offered for the first time or in multiple decades, represent just a part of John’s amazing collection of financial history and numismatic items and the spirit with which he acquired them.

When I first met John and Diana Herzog in 1985, financial history was a subject that seemed contradictory to my numismatic pursuit of United States Obsolete banknotes. It has taken these 33 years for me to realize the transformative role John has played in my passion for collecting, cataloging, and enjoyment of all financial instruments and the significance of their use in commerce and culture.

John’s decades-long passion for collecting and understanding these historic treasures inspired his vision and eventually fulfilled the dream of a permanent Museum of American Finance (a Smithsonian affiliate), located within the steel canyons of Wall Street and the birthplace of the American capital markets. The museum evolved from wall exhibits, to a small museum and gift shop in the ground floor hallway at 26 Broadway (Rockefeller’s Standard Oil Building), to its stately open air gallery at 48 Wall Street. Visitors have the opportunity to enjoy the experience that John wishes to share about the significance of financial history and its relevant artifacts.

The bond certificates, United States Interest Bearing notes (sold within the main body of this session and pedigreed to the Herzog Collection), documents, and related items cataloged in this auction mirror the times they were issued. This sale covers items issued from 1837-1919. Most were for the financing of war and conflict. Even in the late 1840s, the United States was young and vulnerable. The idea of Manifest Destiny to populate the continent merged into the Civil War and the creation of fiat currency and many different loan issues. The National Banking system and its currency notes were backed by bond purchases. Essential funding toward the end of the Civil War saw rising interest rates and favorable terms for investors to sell notes and redeem them for gold.

After the Civil War, relative calm and peace brought about ambitions for American expansion overseas, where vulnerable European nations with dwindling empires could be replaced by American mercantilism. Hawaii became our 50th state because we believed that was a better idea for everybody in 1893. The Spanish colonial empire was collapsing in the 1890s and the sinking of the U.S.S. Maine made Teddy Roosevelt famous and created low denomination Treasury Bonds aimed for public sale to support war efforts. The most significant public financing by the United States was for World War I, where five issues of loans were created to sell to the public and investors in a three-year span to fund this war. John’s collection of these bond certificates is the finest and most comprehensive ever cataloged for sale.

It was exciting to be called upon to catalog this special presentation of the John E. Herzog Collection for Stack’s Bowers Galleries. It allowed me over the course of research and writing to reflect how transformative a person John has been to me. I realized how much

of a story the items themselves have to tell. When John and Diana hired me, in early 1989, to work at R.M. Smythe & Co., I never imagined that someday I would have the honor of presenting these to the collecting community. Everyone should be thankful for John’s generous spirit, his creation of the museum, the sharing of his passion for numismatics and collecting, and the friendship he has shown to so many of us for decades. He truly is “The Friend of Financial History.”