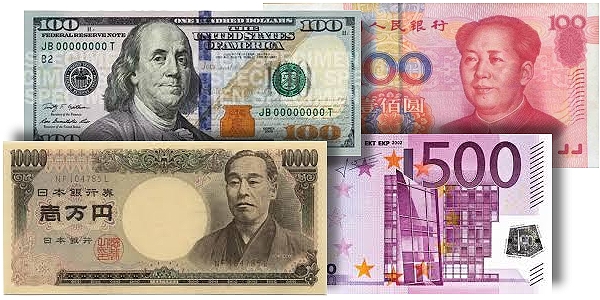 Ever wonder what the highest-denomination paper money banknotes are in the world’s top-producing nations based on GDP?

At a time when terrorism and other criminal activities increasingly have the attention of international police and regulatory agencies, there is greater pressure on authorities to eliminate the higher-value denominations of the world’s leading paper money, whose fungibility, liquidity, purchasing power and anonymity make them useful means of funding such activities and desirable targets for counterfeiting.

Recently, the European Central Bank voted to end production and stop issuance of the 500-euro note by 2018, at which point the newly-released 200-euro Europa series banknote will be the highest circulating paper money denomination in the eurozone.

To find out about the rest of the world, CoinWeek took a survey of the highest denominations in the top 15 economies around the globe based on Gross Domestic Product (GDP).

Here are the results:

The United States once made gold-backed paper currency with face values as high as $100,000. Gold certificates–also issued in denominations of $500, $1,000, $5,000, and $10,000–were discontinued in 1940 during the production of Series 1934 and have since been used exclusively for intergovernmental transactions.

This leaves the $100 Federal Reserve note as the nation’s highest-denomination circulating banknote.

The $100 bill, featuring a portrait of Founding Father Benjamin Franklin, is one of the world’s most popular and widely-traded forms of paper currency. It boasts a multitude of security features, including a security ribbon, color-shifting ink, a portrait watermark, a security thread, raised printing and microprinting.

At the time of writing the 100 Yuan might be worth just $16 USD, but it’s China’s highest denomination of currency. The red banknote, featuring People’s Republic founder Mao Zedong (毛泽东), is also one of the nation’s most secure, with golden-hued touches and security strips to help deter counterfeiting. The People’s Bank of China has increasingly adopted more advanced security measures for its bills after several raids in recent years have turned up millions of dollars worth of counterfeit Chinese money.

Japan boasts one of Asia’s oldest and most established economies. The island nation has produced a wide array of banknotes over the years, but today has just four paper denominations: the 1,000-, 2,000-, 5,000- and 10,000-yen banknotes. The four lower denominations are also issued as coins.

The 10,000-yen note features a portrait of Japanese author and teacher Fukuzawa Yukichi (福澤 諭吉) on the front and is equivalent to roughly $91 USD. EU-member Germany comes in at number four on our list. Prior to its admission into the European Union in 2002, West Germany (1948-90) and a reunified Germany (1990-2002) used the Deutsche Mark as its unitary denomination. Immediately before the changeover, the highest German denomination had a face value of 1,000 marks and featured the Brothers Grimm of fairy tale fame.

Incidentally, many Germans are unhappy with the EU’s recent decision to phase out the 500-euro note, since nearly 80 percent of the nation’s transactions are handled with cash.

The British have produced £1,000,000 and £100,000,000 notes for special governmental transactions that back money produced in Scotland and Northern Ireland, but the highest-denomination circulating banknote issued by the Bank of England is the £50 note, which features Queen Elizabeth II and a dual portrait of steam-power pioneers Matthew Boulton and James Watt on the back.

It should be noted that some banks in Scotland and Northern Ireland produce 100-pound banknotes that are not technically legal tender but are nonetheless widely accepted.

The 1,000-rupee note is India’s highest-denomination currency, and it sees plenty of daily use in the fast-growing, rapidly developing nation of more than one billion people. The 1,000-rupee note belongs to a larger series of Mahatma Gandhi banknotes that have been issued by the Reserve Bank of India since 1996. There have been calls to eliminate the 1,000- and 500-rupee notes from production to help weed out tax evaders and black market activities but the bills remain in production

Like their European Union counterparts, the French presently use banknotes with a face value as high as 500 euros. However, the day will soon come when France bids au revoir to the €500 note as it is phased out of production across the eurozone.

After the €500 note is eliminated from production in 2018, the 200-euro bill will become the highest-value piece of currency in France.

This large South American nation is famous for its beaches and nightlife, where many Brazilians and tourists regularly spend 100-reais banknotes. The highest denomination of currency produced in Brazil, the 100-reais note (“reais” is the plural of “real”) boasts a sea green color and features the image of a dusky grouper on the reverse.

The obverse image features the head of the goddess República and is shared across all Brazilian banknotes.

The highest denomination bill currently produced in Italy is the €500 note, but again, that will change in 2018 when the note is discontinued.

Interestingly, while EU countries such as France, Italy, and Germany are lowering the top face values of their paper currency from 500 to 200 euros, many non-EU European nations continue producing high-value paper currencies–much to the chagrin of neighboring Eurozone nations.

Canada’s largest denomination of currency in production is the $100 banknote, which bears an image of former Prime Minister Sir Robert L. Borden (served 1911-20).

The polymer notes represent the latest advancements in Canadian currency, with the present series originally issued between 2011 and 2013. The Bank of Canada is now preparing to issue a new series of banknotes in 2018, with at least one note bearing the image of an iconic Canadian woman to be determined in a national poll.

In a nation experiencing high inflation, the Russian 5,000-ruble note seems to fare quite well in circulation. Representing the highest denomination of paper money currency, the banknote has an obverse portrait featuring a monument to Russian diplomat Nikolay Muravyov-Amursky and a reverse image of the Khabarovsk Bridge over the Amur River.

Like many dollar-based nations, Australia’s top note is the $100 bill. The light blue and gray Australian $100 banknote (worth approx. $72.33 USD) has an obverse portrait of Australian geologist and explorer Douglas Mawson along with astronomer John Tebbutt.

The current polymer notes date back to 1988, when the nation first issued plastic currency.

For now, the 500-euro bill is Spain’s highest-denomination paper money banknote. Once the Eurozone phases out the production of €500 notes in 2018, the €200 will become Spain’s highest-denomination note. At this point, there are some 600 million 500-euro notes in circulation throughout Europe and the rest of the world, representing just 3.2 percent of Euro notes but 30 percent of their cumulative value.

Rounding out the top 15 nations with the highest gross domestic product is Mexico. The nation currently issues the 1,000-peso banknote, which features an obverse portrait of Don Miguel Hidalgo y Costilla, leader of the Mexican independence movement. On the reverse is a view of the University of Guanajuato.

The common theme among the highest denomination circulating paper money banknotes issued by the nations listed above is that the denominations aren’t outlandishly high, with many capped at the “100” mark. In the case of the Euro, the sizable €500 paper money note is on its way out, launching the more modest €200 bill to the top place among eurozone members. Nevertheless, €500 notes will still be legal tender after 2018 and can be exchanged for lesser bills.