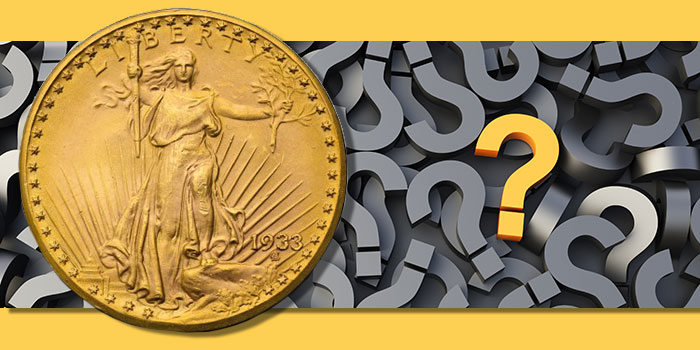 The 1933 Double Eagle reigns today, but other rarities could one day hold numismatics’ top spot

The 1933 Double Eagle that realized $18,900,000 USD in a Sotheby’s sale earlier this month was stunning news for the numismatic community. The final hammer price shattered the previous record for a coin by nearly double.

The new price summit for a rare coin finally approaches that of fine art. It should be remembered that in the same room in which the 1933 Double Eagle sold, paintings have been bought for over $300 million. Sotheby’s orchestrated a masterful promotion of the coin and most likely drew the interest of several non-collectors for the bidding. The identity of the winning bidder has yet to be revealed.

Prior to the sale, numismatic pundits speculated how much the coin would realize when put to the hammer. More than a few, including myself, wondered about the impact of the United States Mint’s 11 coins lurking in the background. These are also an additional two examples that reside in the magnificent collection of the Smithsonian Institution. Apparently, the bidders for the Farouk example of the 1933 Double Eagle are solidly convinced these will never enter the market.

Many will ask: Why would someone pay almost $19 million for a coin? The most obvious answer is: Because they can! We are in a seemingly new era of staggering wealth in the United States and the world. The number of new billionaires that have been created in recent years has led to unprecedented demand for world trophies, art, yachts, real estate, and other prestigious signs of wealth. Also, the coin’s previous “forbidden fruit” status gives it incredible desirability.

A great deal has been written about the 1933 Double Eagle in recent months and at least two books from years ago are based on the coin’s incredible saga. The Sotheby’s catalog for the coin makes for great reading and should be of interest to anyone involved in numismatics. There is no reason to expound on the voluminous amount of information that has been disseminated in recent months.

The one question that may be up for debate, however, is whether it is now the world’s most valuable coin. The free market (as demonstrated by the Sotheby’s auction) makes a great case, but there are a few coins that could eclipse the stellar results from the most recent sale of the 1933 Double Eagle.

The first candidate for the world’s most valuable coin is the 1849 Double Eagle. Although technically a pattern or experimental coin, the 1849 Double Eagle is nevertheless one of the great rarities of US coinage. Following the discovery of gold in California in 1848, a tremendous flow of the yellow metal made its way East. On March 3, 1849, the federal legislation to create gold dollars and Double Eagles was enacted. The production of Double Eagles would convert the bullion into coins with the least effort.

Mint Chief Engraver James B. Longacre engraved the dies for the new coinage and supervised an attempt to strike the new denomination. In a letter dated December 24, 1849, from Chief Coiner Franklin Peale to Mint Director Robert M. Patterson, Peale wrote: “It is with extreme regret and after the most earnest endeavors to overcome the difficulty that I am compelled to inform you that the impression upon the new die, for the Double Eagle, cannot be brought up by the usual coining processes.”

The relief of the portrait was too high, and the coins could not be struck properly for mass production. These delays in production resulted in just a handful of coins being struck late in 1849.

It has not been uncommon in the history of US coinage for the first year of issue to be problematic. Several interesting coins have been redesigned because the relief was too high. Although aesthetically attractive, the actual production of high-relief coins was very difficult. The 1907 Saint-Gaudens High Relief Double Eagle is probably the most famous example. Others include the 1921 Peace Dollar and the 1849 Gold Dollar.

All but two 1849 Double Eagles were melted. One was sent to Secretary of the Treasury W.M. Meredith and another to the Mint Cabinet in Philadelphia. The Meredith coin may have gone to the collection of Steven Nagy in Philadelphia, but it is unknown to numismatists today.

The Mint Cabinet example has been transferred to the Smithsonian Institution and is one of the most popular attractions of the National Numismatic Collection — on display in the rare coin exhibit, The Value of Money, at the Smithsonian’s Museum of American History. There, the coin is the centerpiece of the “Legendary Coins” case and is considered by many to be the “ruby slippers” of numismatics.

The missing Meredith coin could appear one day. Most experts agree that the 1849 Double Eagle is as desirable as the 1933 Double Eagle, if not more so. The two make incredible bookends to an extremely popular series and denomination. It is reported that in 1909, J.P. Morgan offered $35,000 for the coin — a tremendous amount for the era.

It can only be speculated what an example would bring if offered for sale. It is certain the eight-figure mark would be broken, and $25 million is not out of the question. The discovery of the Meredith coin would be truly earth-shattering news and a new price record for a coin would most certainly be realized.

The second coin that could one day come to market and claim the pinnacle of price records is the spectacular 1907 Indian Head Double Eagle Pattern. It is one of America’s most stunning and desirable coins. President Theodore Roosevelt was personally involved in creating this fascinating issue. Roosevelt believed that the nation’s coinage was unattractive and without artistic merit.

Years earlier, while vice president, Roosevelt had become acquainted with the famous sculptor Augustus Saint-Gaudens, whose works include Diana, sculpted in 1892 for the original Madison Square Garden; the Sherman Victory Monument in New York City; Hiawatha for Saratoga; and many others.

It is not certain when Roosevelt first decided to commission Saint-Gaudens to create a new coinage, but by December 27, 1904, he wrote to Secretary of the Treasury Leslie Mortier Shaw: “I think our coinage is artistically of atrocious hideousness. Would it be possible, without asking permission of Congress, to employ a man like Saint-Gaudens to give us a coinage that would have some beauty?”

The president was enamored with the beauty and high relief of ancient Greek coinage. At one time, Roosevelt wanted to change the designs of the entire US coinage. Because of the difficulty of adapting modern minting techniques to the high relief effects that Roosevelt desired, Saint-Gaudens concentrated his efforts on the Eagle and Double Eagle issues.

By means of extensive personal correspondence with the artist at his studio in Cornish, New Hampshire, Roosevelt contributed greatly to the design of this and several issues of the period. He wanted to include the use of an American Indian in full headdress. Saint-Gaudens wrote to Roosevelt in 1907: “I like so much the head with the headdress, and by the way, I am very glad you suggested doing the head in that manner.”

Although Saint-Gaudens preferred the Indian design for the Double Eagle, the Liberty theme (now known as “Saint-Gaudens”) was chosen for that denomination. The Indian Head design is similar to the design adopted for the regular-issue Eagle. In his last letter to the president, Saint-Gaudens wrote: “The majority of the people that I show the work to evidently prefer, with you, the figure of Liberty to the [Indian head] and that I shall not consider any further on the twenty-dollar gold coin.”

At the request of the artist, however, one example was struck for comparison. The pedigree of this extraordinary coin began with Charles Barber, the chief engraver of the US Mint. Waldo Newcomer purchased the coin directly from his estate. The coin was then sold to the prominent collector F.C.C. Boyd. Boyd’s wife sold the coin for a reported $1,500 to Abe Kosoff and Abner Kreisberg around 1945.

The coin was then sold to King Farouk of Egypt for slightly less than $10,000. After King Farouk was overthrown, his collection of rare coins was auctioned in 1954. The coin sold for approximately $3,444, again to Abe Kosoff, who placed the coin with Roy E. (“Ted”) Naftzger Jr. In 1956, Dr. J.E. Wilkison obtained the coin for $10,000. It was sold in 1973 to Paramount International Coin Corporation as part of the Wilkison Gold Pattern Collection. The Wilkison Gold Pattern Collection was then traded to A-Mark Financial.

It was then sold by private treaty to Maryland dealer Julian Leidman in 1979 for $500,000. Jack Hancock and Bob Harwell purchased the coin in the 1981 American Numismatic Association auction sale for $475,000. A few years later, it was sold to a major Northeastern collector of Saint-Gaudens coinage and is today the cornerstone of that collection.

The coin has not been shown publicly for four decades. This probably explains why the coin is not as well known to the general numismatic community. It is my personal favorite US coin and would be the first coin I would try to acquire if I were a crypto multi-billionaire. The 1907 Indian Double Eagle could break a new price record if the coin were properly promoted and became more well known.

It is interesting that the three coins discussed above are all Double Eagles. Past mega-coins such as the 1894-S Dime, the 1913 Liberty Nickel, and the 1804 Silver Dollar have been left in the dust by the above issues. As we all know, great stories are what propel most coins to stardom. The 1933 Double Eagle, the 1849 Double Eagle, and the 1907 Indian Double Eagle all have incredible stories and are physically imposing objects of desire.

The 1933 Double Eagle will probably hold its spot as the World’s Most Valuable Coin for the near term. Maybe someday it will be knocked from its pedestal by a surprising discovery or unique offering.
Jeff Garrett bio