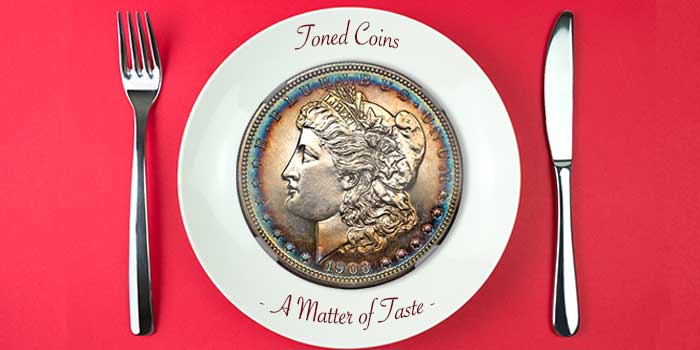 Someone once said, “beauty is in the eye of the beholder.” This sublime statement has become a reality in the rare coin business. Toned coins are now extremely collectible and highly sought after.

When I started buying and selling rare coins a few decades ago, toned coins were certainly a curiosity, but the demand for them was lukewarm at best. As a matter of fact, most collectors wanted their rare coins to be frosty white. Any coin with toning was soon slated for a bath in Jewel Luster, the coin dip of choice for most collectors.

(Jewel Luster has a mild blue dye added to it to discourage people from exposing their skin to the chemicals. Believe me, there was no shortage of Smurf-fingered coin dealers in the 1970s and ’80s!)

Much has changed over the years. Collectors now have a deep appreciation for coins with attractive, original toning. What constitutes attractive is the question that many have different opinions about.

Classifying Silver Coins Based on Tone

I have mentioned before that silver coins have three basic appearances. About 40-50% of “vintage” (those over 50 years old) coins seen on the market today are frosty white or mostly so. These are coins that have probably been conserved at one time, or were found in rolls or bags and not exposed sulfur or other contaminants. A large number of Morgan silver dollars fall in this category.

Another 40-50% of silver coins have toning that is not considered attractive, generally ranging from light brown to an almost black appearance. Often, these are the coins that sell for significant discounts when offered for sale. The coins may technically grade quite high, but many collectors do not like the aesthetic appeal of the pieces.

You might be wondering why, if these coins sell for a discount because of the unattractive toning, someone does not have them conserved. That is a great question! The problem is that not all coins are candidates for conservation.

Indeed, many coins with deep or uneven toning will look terrible if cleaned, which is why conservation should be left in the hands of experts. I can testify to the truth of this statement by telling you that I have attempted to improve the appearance of a coin, only to be horrified by the results! My “school of hard knocks” collection of coins contains a Monroe half dollar that cost me over $4,000 in the late 1980s. A train-wreck dip resulted in a coin that would be hard to sell for $200 today.

Finally, we have the small percentage of coins found with what can be deemed as attractive toning. I estimate that less than 10% of the silver coins on the market fall into this category.

As mentioned above, what constitutes attractive toning can be subjective. However, there are some common characteristics. Coins with attractive toning are usually very frosty, and the toning appears to be layered lightly on the surface of the coin. The colors typically range from light brown to almost any appealing hue of the spectrum.

Quite a few of these attractive coins are also found with partial toning. This means the coin is bright white with splashes of color. Sometimes coins that had been stored for years in bags will have crescent toning from being partially covered by another coin while being exposed to the toning effects of the bag. These coins are among the most sought after by toning aficionados.

Morgan silver dollars are one of the popular issues for collectors of toned coins. The premium paid for these coins sometimes seems to defy logic. A few years ago, I consigned an 1884-O Morgan dollar graded NGC MS 64 to auction. The coin displayed beautiful toning on both the obverse and reverse. Apparently, this is a very rare combination! An average 1884-O silver dollar is worth less than $100 in MS 64. This toned coin sold for nearly $4,000!

Classic commemorative half dollars (those struck from 1892 to 1954) are also extremely popular with the toned collector crowd. In recent years, there have been auction records for half dollars with toning that most would have thought totally impossible. Sometimes, toned coin collectors seem willing to engage in mortal combat to obtain the coins they feel worthy of their collection.

In other words, you can throw out the price guides when these coins cross the auction block.

Here’s Looking at You, Coin

Just as what constitutes attractive toning is subjective, collecting toned coins is a matter of taste. Generally, collectors today are much more willing to pay higher prices for coins with great eye appeal. This mantra is taken to extremes when a truly beautiful coin comes to market.

I have stated before that if I come across a stunning coin, I almost always place the coin in auction. It seems that buyers for these coins sometimes have a better imagination than I do! The recent sale of a fairly common date Mercury dime for over $300,000 proves this point very clearly.

Eye appeal has become a very important element for pricing rare coins, and toning is just one of the many important factors that must be considered. It is actually quite refreshing to see coins that sell more as pieces of art, rather than in relation to a Greysheet bid or retail price guide.

One final piece of advice: Buy certified coins to ensure they have not been artificially toned or enhanced. Recent auction prices have already spurred deceptive individuals to create pieces with rainbow toning to cash in on the craze for beautifully toned coins. For this reason, it is necessary to educate yourself to understand the appearance of natural toning. A study of toned coins sold at auction will give you some idea on how to value one of the most enigmatic segments of the rare coin market.