An often repeated viewpoint asserts that, since the vast majority of the the gem quality pre-1900 U.S. coins in the Eliasberg Collection came from the Clapp Collection, Eliasberg does not deserve much credit for selecting, appreciating or even understanding gems. From the evidence gathered so far, it seems that the Clapp family deserves most of the credit for the overall quality and originality of the coins in the Eliasberg Collection, which was the all-time best assemblage of classic U.S. coins.

Was Eliasberg aware that he owned so many superb coins? Did he know that the rarities in his collection rated so highly in the category of originality? For the sake of fairness, it must be considered that he did, and that he was able to identify them to an extent.

He did acquire some gem quality, classic U.S. coins that were not included in his purchase of the Clapp Family Coin Collection intact in 1942. John Martin Clapp acquired coins from the 1880s until his death in 1906 and his son, John H. Clapp, continued the family’s coin collection.

“Although John H. added to his inherited collection of United States coins, he sought his own specialty, and that was the vast and largely numismatically explored area of Central and South American gold coins,” stated Q. David Bowers in material that was recently republished on Coins.com. John H. Clapp died in 1940.

Even if the Clapps did not employ the term “gem”, it is certain that there was an equivalent concept in their respective minds, as such a large percentage of the Clapp Family coins have been graded from 65 to 69 by many experts, very often 66 or 67. While different terminology was used in the past, the concept of a gem quality coin has remained somewhat stable over time.

It is also true that many of the coins that Eliasberg obtained elsewhere do not exist in gem grades or could not have been acquired in such grades while Eliasberg was collecting high-quality classic U.S. coins, mostly from the middle of the 1930s to around 1955 or so. After 1955, he added some modern U.S. coins and vintage world gold coins to his collection.

The Garrett Family Coin Collection, as far as I know, was static from the 1930s to March 1976, when a few items were auctioned by Stack’s in New York. Louis Eliasberg, Sr. died in February 1976. Most of the U.S. and American colonial numismatic items in the Garrett Collection were auctioned in a series of sales by Bowers & Ruddy from 1979 to 1981.

The Clapps placed a priority of quality over rarity, though they owned many rarities. Eliasberg acquired quite a few extremely rare coins on his own initiatives. Of the four 1885 trade dollars that have been certified by PCGS or NGC, Eliasberg had the finest of the four. The fifth has not been seen publicly in a long time.

Like several other rarities in the Eliasberg Collection, this 1885 trade dollar was purchased by Eliasberg himself from the sale of the William C. Atwater Collection by B. Max Mehl in 1946, four years after Eliasberg acquired the Clapp Collection. That 1885, however, just barely qualifies for a gem grade. It is plausible that the Clapps would not have regarded it as such.

The Eliasberg 1884 trade dollar was also purchased by Eliasberg from the Mehl sale of the Atwater Collection. This 1884 was NGC-certified as Proof-66 after the Eliasberg ’97 sale.

The Eliasberg 1838-O half dollar was never in the Clapp Collection. It is not, though, a gem quality coin. There do not survive, however, any gem quality 1838-O halves.

Although its certified grade is somewhat controversial, another Eliasberg coin that comes to mind is the Cleneay-Mills-Earle-Atwater 1793 Chain cent ‘With Periods’ (S-4). I am not now commenting upon the assigned MS-65 grade, though I did investigate the matter. There were experts who were willing to be quoted as being in agreement with the certified grade and there were other expert graders who insisted that this Chain cent was substantially overgraded and has noteworthy negative issues. A 64 grade would have had a more solid following. It is interesting, though, that more than a few of the non-Clapp Eliasberg coins that have been certified as grading 65 or 66 rate highly in the category of eye appeal though not so much in the technical category.

While the Eliasberg 1817/4 half dollar is not a gem, it is certainly the finest known. Eliasberg acquired this 1817/4 privately from Al Overton in 1953. Since an uncirculated 1817/4 half does not survive, it would be illogical to penalize Eliasberg for not having a gem quality 1817/4. Eliasberg had many other rarities for which gems do not survive or were unavailable to him while he was actively collecting.

The Eliasberg Collection was viewed by millions of people, literally, while exhibited at various locations from the 1950s to the ’70s, including a stay at the Smithsonian Institution. This collection is central to the culture of collecting classic U.S. coins.

Q. David Bowers was the sole cataloguer of Eliasberg’s U.S. gold coins, which were auctioned in October 1982. Although that sale was before my time, I covered later Eliasberg auctions for multiple publications, including Numismatic News and World Coin News.

Colonials, patterns, copper coins, nickels, half dimes and dimes were all auctioned in May 1996 by Bowers & Merena in New York. U.S. quarters, half dollars, and silver dollars were auctioned in April 1997. World gold coins were auctioned by American Numismatic Rarities (ANR) in April 2005.

‘Odds and ends’ from the Eliasbergs were auctioned by Stack’s in 2010, not long after the death of Louis Jr. Rumors suggest that both sons sold a few coins privately, though I have never seen strong evidence that such transactions occurred. I knew Richard Eliasberg and discussed his father’s collection with him on multiple occasions.

Richard was the consignor to the above-mentioned auctions in 1996, 1997 and 2005. Louis Jr. inherited his father’s U.S. gold coins and a small number of coins in other categories, plus some medals and numismatic literature.

There were many gem quality coins in all four auction events. Of Eliasberg’s five quarters from the year 1818, two of them are gems and none of the five are pedigreed to the Clapps in the Eliasberg ’97 catalogue.

For the moment, is it fair to assume that the pedigree listings in the Eliasberg ’96 and ’97 catalogues are accurate enough. As collector-records are imperfect and no large cataloguing project can be done perfectly, it would be unreasonable to expect cataloguers to accurately detail the pedigree of each coin and to remember to include all available information. A pertinent aspect, however, is that there are some Clapp Collection coins in the Eliasberg collection that were not listed as such in the Eliasberg catalogues, mostly because it was impossible to match every Clapp record with an Eliasberg coin, especially in cases where both Clapp and Eliasberg had multiple representatives of the same type and date.

In other cases, known pedigrees may have been accidentally omitted. While the Eliasberg ’97 catalogue lists a detailed provenance for the Proof 1822 quarter, no such listing is put forth for the Proof 1821 quarter. When both coins later appeared in the Pogue I sale in 2015, the cataloger then lists very similar pedigrees for both coins, and makes clear that they both were in the Clapp Collection.

The contents of the Pogue Family Coin Collection provide evidence that more than a few non-Clapp coins in the Eliasberg Collection are gems. In addition to being desired by the Pogues, many of these were vetted by David Akers or Richard Burdick. Importantly, several of them have been CAC-approved as grading 65 or 66.

If Eliasberg did not choose his 1820 ‘Medium 0’ B-3 quarter himself, who selected it for him? It would not be fair to assume that Eliasberg was unaware of its superb quality. 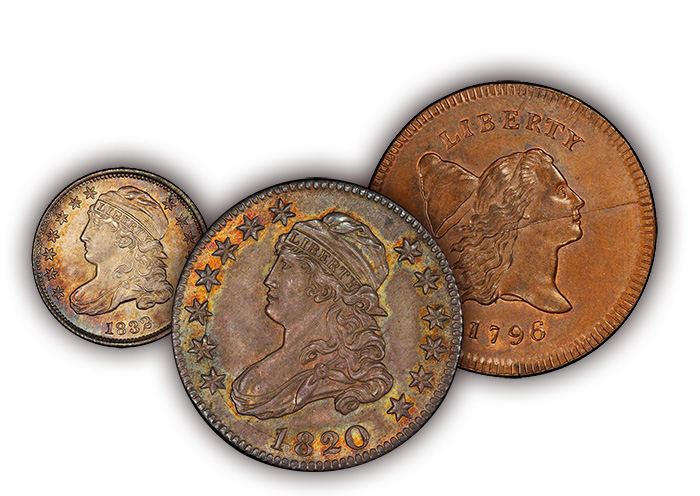 The Eliasberg-Pogue 1832 half dime is terrific overall, very attractive with appealing natural toning. It is PCGS-graded as MS-66 and CAC-approved.

The Eliasberg-Pogue Proof 1830 dime seems to be one of the few Earle-Eliasberg coins that were not in the Clapp Collection between 1913 and 1940. In any event, this 1830 is a true Proof and a spectacular gem. It is PCGS-certified as “Proof-65 Cameo” and CAC-approved.

The Eliasberg-Pogue 1832 dime was probably never in the Clapp Collection. It is PCGS-graded as MS-66+ and CAC-approved. I devoted a discussion to the sale of the Capped Bust dimes in the Pogue Collection in 2016. There were several Eliasberg-Pogue Capped Bust halves that, apparently, were never in the Clapp Family Collection. The Eliasberg-Pogue 1812 is PCGS-graded as MS-67 and CAC-approved. In 1997, Charlie Browne graded it as “66+”, the same as I graded it in 2015. Nevertheless, this 1812 is certainly a pristine gem of an early Capped Bust half that Eliasberg somehow acquired.

The Eliasberg-Pogue 1818 (O-104a) half is even better than the just-mentioned 1812, incredibly original and technically near-flawless. It is PCGS-graded as “MS-66+” and CAC-approved. Charlie graded it as 66 back in 1997. Browne has served as a grader for PCGS during four different time periods, for a total of more than 100 months.

As for the Eliasberg-Kaufman-Pogue 1824-‘Repunched 4’ half, the cataloger of Pogue III discusses the Clapp Collection in the text accompanying this coin, yet it is not stated anywhere that this specific coin was ever in the Clapp Collection. PCGS, CAC, Charlie Browne, Richard Burdick and myself all indicate a 66 grade for this coin. So, it seems to be a non-Clapp Eliasberg coin that is, indisputably, a gem. There were four 1794 half dimes in the Eliasberg ’96 sale, two of which were pedigreed to the Clapps. The 1794 of the V-4 (LM-4) die pairing was, in my view, the best of the four Eliasberg 1794 half dimes and no pedigree for it was stated in the catalogue.

I saw this coin again, more than 20 years later, as it was in the Heritage ANA auction in August 2016. While having the PCGS label covered, my notes were very consistent with my notes in 1996. Now, it is very fairly graded by PCGS as “MS-65+” and approved by CAC.

As this 1794 half dime apparently did not come from the Clapp Collection, it would be interesting to know where he obtained it and what Eliasberg was thinking at the time. This 1794 half dime is an incredibly original gem, as were a large number of classic U.S. coins in the Eliasberg Collection. Pending additional research, Louis E. Eliasberg, Sr. deserves the benefit of the doubt when his grading abilities and overall understanding of coins are criticized by coin enthusiasts in the present.