The April 2022 Stack’s Bowers sale of the Fairmont/”Hendricks” coins likely has forever changed the rare date gold market. This is the second article in a multi-part series that will focus on this sale and the specific coins that it contained.

Some “Hendricks” related observations for those of you still wondering exactly what happened on Wednesday, April 6, 2022:

1. Prices for CAC-approved AU55 and AU58 Charlotte and Dahlonega half eagles have increased dramatically

Just look at some of the prices for AU55 common dates:

Would I pay these prices if comparable coins became available via private treaty sale? Likely not. But it is obvious that in the current market, there is absolutely no chance I could buy these in the $4,000-6,000 as I could have as recently as a year ago.

You’re going to be hearing and reading this a lot in the coming months, especially on dealers’ websites. Around 90% of the time this is just not true. What your friendly dealer is failing to tell you is that the Fairmont coin was very conservatively graded (I thought it was a solid MS61/61+) and had exceptional color. It was the single nicest 1856-D I’ve ever seen in a PCGS AU58 holder, and the hypothetical coin against which it is being compared likely isn’t close to this one in terms of originality and eye appeal. Dealer X may have a $12,500 “knock-off” of this 1856-D, but he doesn’t have the $16,800 original.

While no one is a bigger advocate of the “rising tide lifts all boats” theory of numismatic economics than I, this is clearly not the case for many coins. Your $3,500 NGC AU53 1856-D $5 may have become more liquid at $3,500 than it was pre-Fairmont, but this is like comparing a 2014 Toyota Camry to a 2022 Aston Martin DB9.

The area that represents the biggest uncertainty for new pricing post-Fairmont is coins that are very nice but a step down in quality. In the case of our 1856-D $5, this would mean a PCGS/CAC AU55. There is an auction record for one from Heritage’s 10/2019 sale at $4,080. This coin is worth significantly more today – but how much? Would I pay $9,000 for it? No chance. Would I pay $6,000 for it? In a heartbeat. So we can quickly determine that the new post-Fairmont level for this coin is somewhere in the $6,000-9,000 range. What remains is for the market (i.e., collectors such as yourself) to determine where on the price spectrum between 6k and 9k this coin falls.

Including the 1870-CC in PCGS/CAC EF45 that brought a staggering $810,000, there were a total of six Carson City double eagles that brought six-figure prices in this sale. The coin that caught me off-guard, however, was the PCGS/CAC MS63 1884-CC, which brought a record-setting $120,000. This is a date with a PCGS population of eight in MS63 and three at CAC. I sold a PCGS/CAC MS63 in 2021 for $57,500, which I thought was pretty aggressive at the time. A year later, it seems like I gave the coin away. 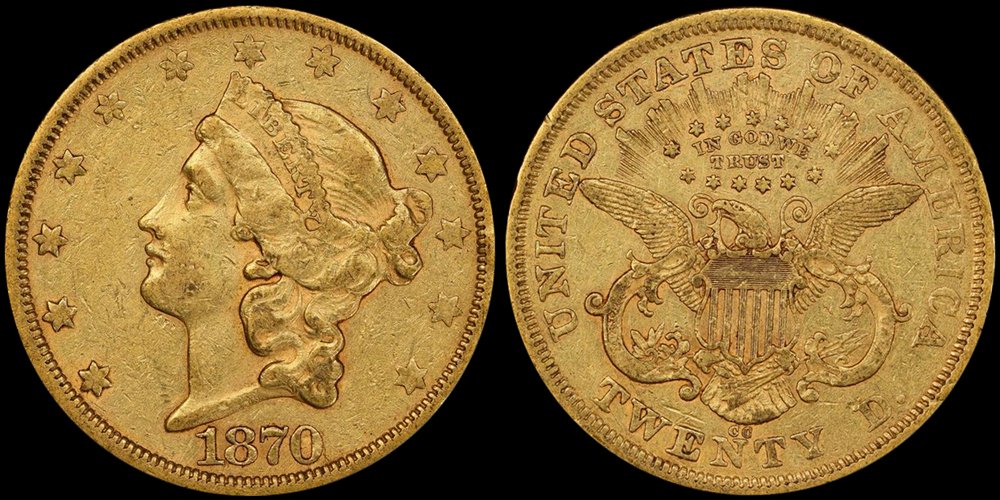 There are currently 82 graded MS62 by PCGS and another seven in MS62+. Assuming there are resubmissions inflating these numbers, there are still likely 50-60 MS62 and MS62+ 1884-CC $20s known; not to mention the other nice ones in the Fairmont holdings that haven’t been graded yet. I could easily see the PCGS population swelling up to 12-14 MS63 coins within the next two years, with the current three at CAC becoming five or even six. Remember, as well, that the chance of any CC $20 upgrading from MS62 to MS63 is not especially remote.

I’d like to think that I know this market better than anyone else, and I’ve certainly handled more Finest Known and Condition Census New Orleans eagles than any other coin dealer. In a “typical” auction, I would have likely bought most of the high-end No Motto and many of the better With Motto coins, but in Fairmont/”Hendricks” I was blown out on all but a few coins.

Some examples are as follows:

Lot 5318: 1881-O graded MS61 by PCGS/CAC. I liked this coin a lot and was prepared to pay in the mid-20s for it but was very surprised when it raced up to $55,200. There are only three graded MS61 by PCGS and I thought the coin was very PQ. This means I could see it grading MS62, although it would probably need to be lightened a bit for this to occur. Is this coin worth $55k+ as a PCGS MS62 non-CAC? We shall see.

6. The return of the Market Premium Factor (MPF) Now that CAC exists to quantify grade rarity, the market premium factor for EF Charlotte half eagles with low CAC populations has increased considerably. A case in point was the 1846-C $5 graded EF45 and awarded a CAC sticker that just brought $12,000 in the Fairmont/”Hendricks” sale. Yes, the coin was actually a solid AU53 (in my opinion). But 12k? Sheesh.

Or look at Lot 5018, a non-CAC 1841-C $5 graded EF40. Nice enough coin but I hope the new owner doesn’t mind the scratches on both sides. The coin still brought $6,000 which seems like a pretty hefty MPF for a reasonably common date which never used to bring much of a premium until you got up to the About Uncirculated level.

In 2020, I might have made the observation that a certain half eagle in PCGS/CAC AU55 had not been offered for sale in that grade since 2013. You would likely have thought “but the market for that coin has been flat since 2013, so why should I be paying more than the last APR?” And in most cases, you’d have been exactly right!

If a really great coin (please note that this does not mean a really expensive coin) comes available and at least two people truly deeply madly want to own it, the most recent APR–whether it was in January 2022 or March 2008–doesn’t mean squat.

8. When it comes to rarity, CAC is the new PCGS

For some serious new dated gold collectors, if a coin isn’t CAC-approved, then it essentially doesn’t exist.

Here’s an example. The 1865-S half eagle has a PCGS population of three in AU58 with two finer. It has a CAC population of one in AU58 with none finer. Even though the “one finer” is an incredible MS64 from the first round of the SS Central America shipwreck releases, the CAC-centric buyer is going to ignore that specific coin until it becomes CAC-approved.

Do I think this is “right”? I’m on the fence here. My appreciation for CAC is well-known. Do I think that non-CAC coins should be ignored? No, I don’t… and many sophisticated newcomers are thrilled to buy nice non-CAC coins. My position is to definitely buy non-CAC coins when CAC-approved issues are very hard to find or they sell for too much of a premium. Have your purchases vetted by a sophisticated dealer who can tell you exactly why your new coin didn’t garner CAC approval.

9. “Originality” is the new buzzword

If you are a collector or dealer who got started after 2000, you’ve not had the chance to see many coins with natural color and (relatively) undisturbed surfaces.

The beauty of the Fairmont hoard (and the “Hendricks” coins) is that 95% of them were as virgin original as you will ever see. One veteran dealer called me over to his table at the recent Baltimore show and stated “I sent my son upstairs (to the auction viewing room) to look at them so he’ll be able to understand exactly what an original gold coin looks like.”

Sadly, many of the coins from the recent sale will be tinkered with (some just a little; others a lot). But the Fairmont Hoard has added thousands of exceptionally nice coins into the generic, Trash Gold and rare date categories, affording new collectors (and dealers) the opportunity to purchase exceptional coins.

As I told a fellow dealer in Baltimore “the “Hendricks” coins were so nice, I even liked the no grades!”

All nice coins seem to be more expensive in 2022 than ever before, but you’ve got to remember that a lot of these issues were ridiculously undervalued B.F. (“Before Fairmont.”) I think No Motto Philadelphia fives and tens (even the “common” dates) are still very good values as are the early With Motto issues from this mint.

I think certain Carson City half eagles are very good values relative to their eagle and double-eagle counterparts.

I think really great Charlotte and Dahlonega quarter eagles and half eagles (especially properly graded MS62 and finer) remain decent values given how incredibly rare most of these are.

Gold dollars and quarter eagles have not been placed under the microscope as have half eagles, eagles, and double eagles; so many dates in these two denominations remain overlooked.

Surprisingly, there are many good values to be had in the Liberty Head double eagle series. As I discussed above, the CC market is now majorly overpriced, but high-end Philadelphia and San Francisco issues in all three types remain undervalued. As an example, I bought the second-finest-known 1859 $20 (PCGS/CAC MS62) in the recent Stack’s Bowers sale for $72,000. Had Dell Loy Hansen not already owned the best (also graded PCGS/CAC MS62) and we went head-to-head, the coin would likely have sold for $125,000-$150,000.