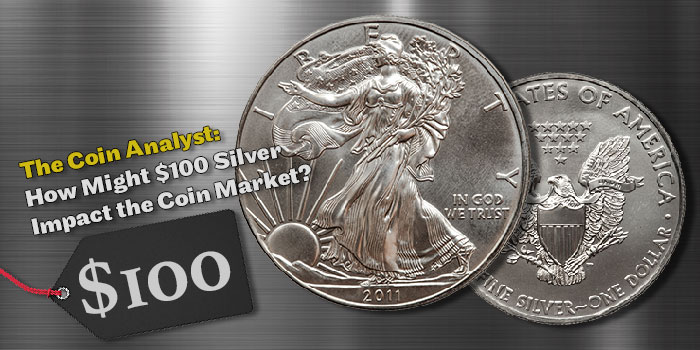 Rising bullion prices have often been a boon for the numismatic coin market. They enable precious metal investors to direct some of the profits from the sale of their bullion holdings to numismatic pieces. This tends to have a substantial impact on the overall coin market because many large dealers sell both bullion and collector coins, just as many individuals have positions in both areas. Besides, stacking bullion frequently spurs buyers to become interested in coins with numismatic value from low premium to rarer coins.

This phenomenon has been seen many times, including during the two major bullion booms of the 20th and 21st centuries – in 1980 and 2011 – when the market for collector coins was very strong at the same time there was so much action in the bullion market. This was especially true during the more mature market of 2011 that coincided with a very successful August ANA World’s Fair of Money in Chicago held weeks before gold briefly went over $1,900 USD in early September. As far as bullion is concerned, by this time investors were buying metals for different reasons than in 1980 when they were mostly trying to get rich quick or were concerned about double-digit inflation. In 2011, metals were seen as a hedge against a possible U.S. government default and as a way to diversify assets. Gold was no longer mainly for bugs.

In 1980 as gold and silver headed towards their all-time nominal peaks of $2,000 and $50 respectively amid a speculative fervor, news accounts emphasized the long lines of people bringing anything made of either metal to sell. But there was also a lot of activity in the numismatic market. In fact, after gold and silver reached their peaks and then began a sustained descent, collector coins continued to heat up as the ’80s progressed, eventually driving common coins like generic graded Morgan dollars to levels they have never seen since.

But would a run-up to $100 spot silver be good for the coin market, and how would we even get to that level? It’s clearly one thing when silver goes from $10 to $50 an ounce (as it did from 2008 to 2011), and quite another if it were to hit say $100 or more, perhaps at a time when gold spot reached $3,000 or more–a level that is often predicted to be reached within a matter of as little as a year or several years by gold bugs.

Silver usually tracks gold’s moves but with a lag, as Keith Neumeyer, CEO of First Majestic Silver, told Kitco on September 17, 2019. However, while gold hit $1,900 in August 2011, silver reached $50 earlier that year in April and had already declined to about $40 by the time gold peaked.

And in recent years, even as gold prices began recovering from their lows of around $1,100 in late 2015, the price of silver has largely lagged. But some analysts expect it to outperform this year due to rising industrial and investment demand and tightened supply. Keep in mind that based on the silver-gold ratio, silver is arguably deeply undervalued. And the prior nominal high of $50 reached first in January 1980 would be $150 adjusted for inflation – all reasons why some people are very bullish on silver.

For most collectors today, silver coins are where the real action is, especially coins priced at $150 or less since relatively few people can afford to build collections of gold coins with spot at $1,600. This tendency has only strengthened in 2020 following another round of premium increases by the United States Mint on its precious metal products and the fact that most sellers are now required to charge sales taxes below certain threshold amounts. These factors have priced many consumers out of numismatic gold coins (apart from perhaps common date and grade pre-1933 U.S. coins, whose premiums have come way down especially with the repatriation of so many U.S. gold coins from Europe and elsewhere in recent years).

Jeff Garrett, veteran coin dealer (www.rarecoingallery.com), past president of the American Numismatic Association, and award-winning numismatic author, told The Coin Analyst that a lot of those gold coins are being melted now because “The market cannot absorb it all. Anything in less than choice mint state is worth melt or very little above that amount. I sold some double eagles this week for 99% of melt.”

As for the possibility of $100 silver, Jeff said:

If silver were to explode in price to $100 or more it would have a huge impact on the hobby. There would probably be another “Numismatic Gold Rush” similar to 1980 and 2009. Shops would have lines of people cashing in on the boom by selling everything made of precious metals. There would also be a huge market selling to the speculators who are [likely] causing the price explosion. For metals to jump that high, there would probably be a breakdown in confidence of the US dollar. I’m not sure how that would affect things.

“A bullion boom could be caused by inflation, breakdown of confidence in the US dollar, etc. This should lead to interest from investors in rare coins and tangible assets. This happened big time in the late ’70s and early ’80s. Unfortunately, this sort of demand and jump usually leads to a market crash. The only healthy rare coin market is fueled by collector demand.

“Anything with minimal numismatic value would head to the melting pots. This includes 90% silver, low-grade Morgan and Peace dollars, and a host of other coins. This happened in mass during the 1980s silver boom. Just my opinion, but I don’t think the public holds nearly as much sterling silver, common silver coins, etc., as they did 20 to 40 years ago. A LOT was sold in those market booms.”

We simply don’t know what would happen if over time, or perhaps suddenly in response to a major economic shock or a major disruption of the silver market such as a supply squeeze or a collapse of the futures market, silver prices reached as high as $100. Ian Russell, president and founder of GreatCollections, a major online coin auction company, told CoinWeek that “[i]t would take a lot to get to $100 silver” such as a major event of the type mentioned above, which would likely spur many people to want to acquire physical metal.

Ian noted that “[t]he coin market is a good industry, which goes up whether stocks are up or down. We are in a situation now with gold and the stock market both going up. I don’t know what that means. As the silver price goes up, it all depends on what the physical demand is. Look at the last year or two, since markets today are different than they were five to 10 or 20 years ago.

“If gold and silver really skyrocket, it’s going to come down to the number of people who want physical metal. It doesn’t necessarily mean that premiums are going to evaporate, but that is a definite possibility. If there is a lot of demand from the retail public that wants physical metal and delivery of it, it can cause premiums to be larger than today even as metals rise.

“There are some who think it becomes melt. I don’t believe that.”

The key point is that if physical demand is there as spot silver rises, that will prop up premiums for silver coins.

Ian also pointed out that in the past year or so as precious metal prices have picked up, premiums have decreased on most products, which he thinks is a liquidity issue (i.e., sellers needed to move their inventory). He said he has seen a big increase in demand for precious metal coins recently compared to a few years ago and also noted that in a bullish metal market, there are many new buyers who want to get in on the action (rather than buying when prices were lower), which would greatly increase the demand for coins. If the demand spiked quickly, it could easily absorb the available supply of silver coins, which would support stronger premiums rather than push them down.

In fact, depending on the level of demand spike, we could see a shortage of silver bullion coins in this situation.

As far as the notion that $100 or higher silver would price many people out of the market, Ian thinks that would only be true for entry-level buyers. Most others would own silver coins that would increase substantially in value, such as American Silver Eagle collections in MS/PF69 that would suddenly be worth many thousands of dollars. While acquiring new pieces would be more expensive, this would be offset by the increase in the value of their existing holdings.

Just as there is no way to predict the future price of silver, it is also hard to predict how those spot levels would impact the non-rare side of the coin market – including how they might impact silver coin premiums. There are certain key unknown variables, like the level of physical demand for silver at the time, the available supply of coins, and the state of the economy and coin market, which all help shape outcomes.

Overall, $100 silver does not have to be a detriment to the coin market and can in fact be beneficial to it. Nor does it necessarily mean premiums would disappear. As always, the devil is in the details.