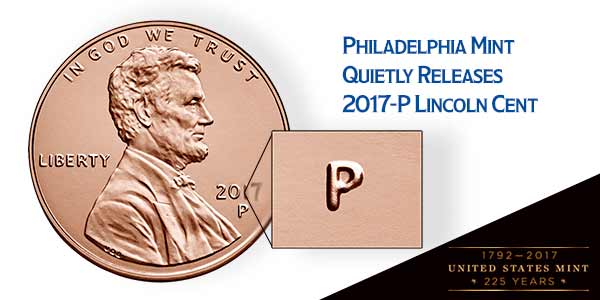 By Joshua McMorrow-Hernandez for CoinWeek.com ……
One of the most important U.S. coins in numismatic history entered circulation over the past several days, and barely anyone noticed – at first, anyway. The 2017-P Lincoln cent became the first-ever United States one-cent coin to bear Philadelphia’s “P” mintmark.

The coin, which has already been discovered in circulation and will also be included in this year’s uncirculated set, is a one-year type coin. In 2018, Philadelphia-minted one-cent coins will again be struck without a “P” mintmark – a tradition that has been maintained since the first official Federal one-cent coins were produced in 1793.

According to Tom Jurkowsky, director of the United States Mint’s Office of Corporate Communications, the 2017-P Lincoln cent was minted in recognition of the Mint’s 225th anniversary on April 2. The addition of the “P” mintmark was an idea suggested by employees of the Philadelphia Mint. The coin was intentionally released without fanfare to gauge how long it would take before the public questioned the Mint about the authenticity of the novel 2017-P pennies. The mint-marked Philadelphia one-cent coins were shipped to Federal Reserve Banks in early January for distribution into general circulation.

The first known individual to publicly inquire about the 2017-P Lincoln cent is Terry Granstaff, a collector who found a 2017-P Lincoln cent during a transaction at a Black Mountain, North Carolina, gas station. Granstaff posted images of the coin the Professional Coin Grading Service (PCGS) online discussion board, causing a numismatic stir on the PCGS message forum before the authenticity of the coin was finally verified.

The 2017-P Lincoln cent is sure to keep numismatists and non-numismatists alike checking their pocket change, but will the new coin have any effects on the hobby? Matt Crane, marketing director at L&C Coins in Los Alamitos, California, doubts it will create incredible buzz in the marketplace. “I don’t think this will have much effect on the collector market since the Mint produces billions of cents for circulation,” says Crane. “But if the Mint had decided to release the P-minted cent in the 2017 uncirculated sets only and not for circulation, it would have had more of an effect on the collector market.”

Still, Crane says the release of the 2017-P Lincoln cent leaves a positive impact on the hobby as a while.

“I think this unannounced and surprising gesture to celebrate the 225th anniversary of the U.S. Mint is something we will be talking about in years to come. Stories like this are what make coin collecting a great hobby.”

The unheralded release of the 2017-P Lincoln cent begs the question: what other surprises might the United States Mint have in store during anniversary year of 2017? The addition of mint marks and other design modifications legally fall under the U.S. Mint’s discretion, pursuant to the authority of the Treasury Secretary to choose coin designs and inscriptions. Perhaps other similarly significant design modifications and enhancements may be in the works throughout the remainder of 2017.

The “P” mintmark has a relatively recent history on United States coinage. It first appeared on the 35% silver 1942 Jefferson five-cent coin and remained there until the wartime composition returned to its traditional 75% copper, 25% nickel alloy in 1945. The “P” mintmark reemerged in 1979 on the first Philadelphia-struck Susan B. Anthony dollars and was included a year later on all circulating Philadelphia Mint nickels, dimes, quarters, half-dollars, and dollar coins.