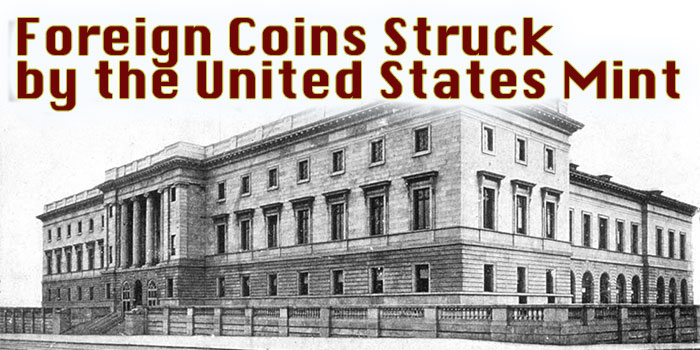 Money is the fuel that facilitates the global economy, and at no point is this more important than during a war.

In 1914, the world descended into a war that would end only after leaving approximately 20 million dead and 21 million wounded or maimed. Due to a complex and conflicted multi-ethnic home front, the United States did not enter the physical fighting until April 6, 1917, when America formally declared war on Germany.

Despite the official policy of neutrality that President Woodrow Wilson declared in 1914 at the onset of hostilities in Europe, the United States Mint continued striking coins for foreign countries. It is perhaps a coincidence that even before the US declared war on the German Empire, no members of the Central Powers ordered coins from the Mint during the war. During the war, almost all of the countries that ordered coins from the US Mint were either in the Americas or in the Pacific, and no European nations ordered or received coins from any American mint facility for the duration of the war.

In 1915, Cuba also contracted with the United States Mint. While the Island did not enter the war until 1917, it did order nearly 63 million pieces between 1915 and 1916. This included several gold denominations that are now extremely popular with collectors. While the 1 peso denomination was struck in gold, it was also struck using a 90/10 alloy of silver and copper. Using some of the same planchets that they would employ for the US gold coinage, the Philadelphia Mint struck a total of 3,433,940 gold coins in 20, 10, 5, 4, 2, and 1 peso denominations. The most common denominations were the 10 and 5 peso coins, with nearly 1.25 million 10 peso and just over 1.8 million 5 peso coins being struck.

Employing a standardized design, all of the Cuban gold coins in 1915 and 1916 depicted the Cuban revolutionary hero José Martí and the national motto PATRIA Y LIBERTAD at the center of the obverse. Along the bottom rim can also be seen the date, the weight, and the fineness of the coin. The coins also show the Cuban Coat of Arms and denomination on the reverse. Similarly, contemporary silver coins have the same reverse but have swapped the Cuban Star and Rays for the bust of Martí. Unlike Cuba, Peru remained neutral throughout the entire war despite German submarine warfare impacting their commerce. Most notably, in February 1917, after a German U-boat sunk the Peruvian ship Lorton off the Spanish coast, the German government refused to offer adequate compensation. Starting in 1916, the Philadelphia Mint struck a limited series of finished gold coins and blank planchets for the Peruvian government. And in 1918, the Mint produced 9,500,000 fractional 75/25 cupro-nickel coins that helped ensure Peruvian exports would continue to flow to the US and its European allies.

Unlike some nations that contracted with the United States Mint, the designs chosen by Peru were not consistent across all denominations. The full and fractional gold Libras both display a bust of a native Peruvian man facing right on the obverse and the national coat of arms surmounted by a radiant sun on the reverse. The silver 1916 Sol depicts the national coat of arms on the obverse ringed by the legend REPUBLICA PERUANA LIMA 9 DECIMOS FINO F. G. 1916, and the seated figure of Liberty facing right with the legend FIRME Y FELIZ POR LA UNION and denomination UN SOL. The smaller base metal denominations (20, 10, and 5 Centavos coins) struck in 1918 all feature the head of Ceres, the Roman goddess of agriculture, on the obverse and a simple yet elegant reverse design centered on the denomination and a curving leaf. Occupied by the US military for two years before WWI, Nicaragua was heavily influenced by the prevailing political winds in Washington, DC. American domination was so extensive that, by 1913, the US had seized control of the national banking network and held sway over Nicaragua’s economy. Following Washington’s lead, Nicaragua broke diplomatic ties with Germany on May 8, 1917, and declared war 10 days later. This corresponds with the 1917 order of 450,000 1 centavo and 720,000 ½ centavo coins placed with the Philadelphia Mint.

Orders continued for various centavo denominations (25, 10, 5, 1, and ½) with regularity and without any major disruptions until 1944. The design of the 1917 ½ and 1 centavo coins are the same, except for the denomination. The obverse depicts the country’s recognizable triangular crest, with the date below and the country name ringed around. On the reverse, the denomination is ringed by a wreath. The Kingdom of Siam (Thailand) initially declared neutrality in 1914. In his 1942 article “Siam Before the War”, the famous British geographer and professor at the London School of Economics and the University of Rangoon, Sir Dudley Stamp, described the prosperous relations Siam had fostered with German businesses prior to the war. However, when interruptions to Siamese trade began, King Vajiravudh and the business community pivoted to non-European markets, centering on the United States.

In mid-1917, Siam declared war on Germany. A complex decision, Siam’s declaration was caused not by German aggression but by an attempt to reinforce Siamese sovereignty and to remove the Allied political pressure being applied to the national government. Later in 1918, an expeditionary force of approximately 1,300 pilots, mechanics, drivers, medical personnel, and various other support staff were sent to Germany and formed part of the post-war allied occupying force. Siam was the only independent Southeast Asian country to actively participate in the war in Europe.

Potentially as a result of the tightening Siamese-American relations, the Kingdom ordered 10,000,000 1 Satang coins from Philadelphia in 1918. This exact order would be repeated in 1919. Composed of 95% copper, 4% tin, and 1% zinc, this coin is one of only four types that the United States Mint ever produced with a punched hole in the center. The reverse legend is translated as “Siam 1 Satang”. During 1918, 4,150,000 pieces were struck at the Royal Siamese Mint in addition to the 10 million struck in Philadelphia. The US, or Short Tail type, can be distinguished from the Siamese or Long Tail type by the lettering on the reverse. On the US type, the lettering is slightly thicker and has shorter strokes.

Similar to Nicaragua, the Philippine islands were firmly under US control at the outbreak of World War I. After the Spanish-American War of 1898, the US took control of the Pacific island nation in a bloody and violent counter-insurgency campaign. Despite this, there was general hope for self-government and increased autonomy in 1914. As a result, the war was not initially a major political issue in the Philippines and the island remained neutral. However, the economy suffered as trade slowed.

On August 29, 1916, the United States passed the Philippine Autonomy Act, which allowed all American military forces to leave for Europe. This was hastened by the fact that local native Filipino leaders decided to cooperate with the US and halt violent insurgencies for the duration of the war. In fact, a Philippine militia was formed which would later form the core of the Philippine Army.

A lady in a flowing dress with long windswept hair stands holding a hammer next to an anvil is depicted on the obverse of the larger silver denominations. The reverse design is a political statement by the US and shows the US Eagle above stars and a striped shield with UNITED STATES OF AMERICA and the date along the denticled rim. The smaller cupro-nickel 5 centavos and 1 centavo coins struck in San Francisco share the same reverse design as the larger denominations. However, the obverse design is changed slightly. Instead of the female figure, the coin depicts a seated man holding a hammer beside an anvil.