The ancient Greek island of Lesbos was located in the northeastern Aegean Sea off the coast of modern-day Turkey. Its largest and wealthiest city, Mytilene, was originally founded in the 11th century BCE by the Penthilidae family of Thessaly, who ruled it until the revolt led by Pittacus in 580 BCE. It was initially confined to a small island just offshore but was later joined to the island of Lesbos, creating a north and south harbor.

Mytilene was famous for its substantial output of electrum coins struck during the late sixth century BCE, in part to subsidize the neighboring Persian Empire. It continued to mint coins, especially the denomination of a hekte (one-sixth of a stater), through the mid-fourth century BCE to aid the Delian league. 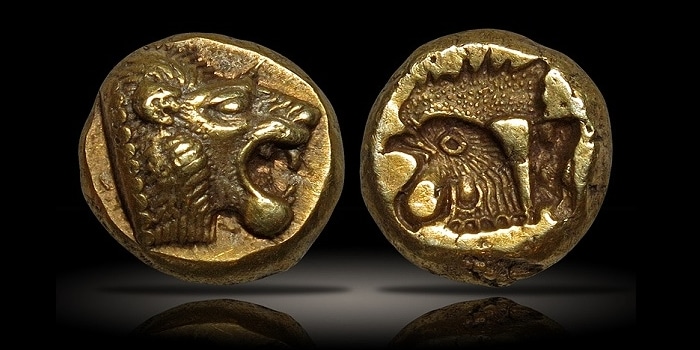 The electrum from Mytilene in this period was comprised of around 43% gold and the alloy allowed the coins to withstand circulation better than pure gold. These coins remained in widespread circulation throughout the Ionian region for the next two centuries, resulting in many coins being found heavily worn and eventually melted down.

The artwork on the small archaic hektes demonstrates miniature engraving at its finest.

The design on this coin came into use shortly after Lesbos came under Persian control, following Cyrus’ defeat of Croesus in 546 BCE. The Persian influence likely determined the selection of the detailed lion motif, as it represented a popular ancient Persian symbol of kings and stateliness. On this coin, the lion is shown roaring, symbolizing the bravery and power of the empire and a warning to those who dare challenge it.

This coin clearly draws its inspiration from the earliest coinage from Lydia a century earlier that featured a similar lion on the obverse. An innovation in die engraving and advancements in coinage technology allowed the sculptural high-relief design on the obverse to be minted alongside the incuse intaglio engraved reverse, instead of the earlier Lydian incuse punch. This made it possible for Lesbos to couple two distinct animal motifs onto a single coin, showing the sacred symbols shared by Greece and Persia, at a time when Lesbos politically balanced allegiances between the regions.

Interestingly, despite the reverse dies from Lesbos now being considerably more intricate than the simple incuse rectangle, the mint authorities still desired to retain some of these original design elements. They required that a miniature incuse rectangle be attached to the neck or head of the god or animal featured incuse on the reverse of the coin.

This coin shows an irregular oblong rectangle behind the head of a rooster wearing a collar of five pearls on the reverse, following suit and carrying over part of the preceding Lydian reverse alongside the new realistic animal depiction.