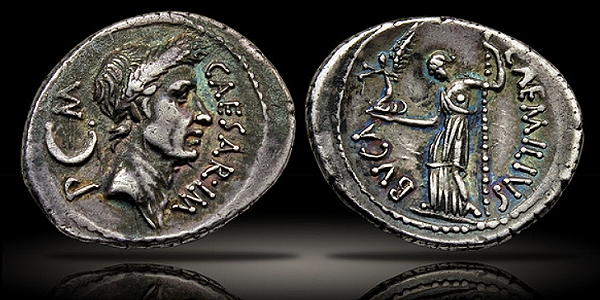 Upon what meat doth this our Caesar feed, that he is grown so great?

What Makes Caesar so Great?

PEOPLE WHO KNOW nothing else about ancient history recognize the name Julius Caesar but might be hard-pressed to say what he ever did, aside from being assassinated. Only his lover Cleopatra VII, his assassin Marcus Junius Brutus and (perhaps) his role model, Alexander the Great, have earned such name recognition. In the English-speaking world, some of the credit goes to Shakespeare’s great tragic play.

There cannot be many collectors of ancient Roman coins who have not coveted owning at least one coin of Julius Caesar. Surprisingly, this is a goal within the reach of relatively modest budgets, as well as a challenge for even the most affluent.

“Coin of Julius Caesar” can mean at least three different things. First are coins issued during Caesar’s life and under his authority. Second are commemoratives issued after his death–particularly by his great-nephew and adopted heir Octavian, who became the Roman emperor Augustus (reigned 27 BCE – 14 CE.) And finally, there are coins without Caesar’s name or portrait but that are related in some way to his story, including the most famous Roman coin of all, the “Ides of March” denarius issued in 43 BCE by a military mint moving with Brutus’s army.

Caesar was born on 13 July 100 BCE into a family of the patrician class, Rome’s elite. Although the family was not particularly wealthy or prominent, it was prestigious, claiming descent from Venus, the Roman goddess of love and fertility. At the age of 20, he fought in the siege of Miletus in Asia Minor, earning the corona civica[1], Rome’s second-highest military decoration, for saving a soldier’s life. At the age of 25 Caesar was captured by Cilician pirates, who demanded a ransom of 20 talents[2]. Caesar protested that he was worth at least 50.

For thirty-eight days, with the greatest unconcern, he joined in all their games and exercises, just as if he was their leader instead of their prisoner. He also wrote poems and speeches, which he read aloud to them, and if they failed to admire his work, he would call them to their faces illiterate savages, and would often laughingly threaten to have them all hanged. They were much taken with this and attributed his freedom of speech to a kind of simplicity in his character or boyish playfulness.

After the ransom was paid, Caesar organized a military expedition, captured and crucified the pirates. Since he had grown fond of them, he had their throats cut to spare them a painful death.

According to legend, at the age of 31, Caesar saw a monument to Alexander the Great and became depressed at the thought that he had accomplished so little, while Alexander at the same age had conquered much of the known world.

In 59 BCE Caesar was appointed governor of Gallia Cisalpina (“Gaul on this side of the Alps”, including much of northern Italy). Drawn into complex tribal politics on the other side of the Alps, he spent the next eight years conquering Gaul. He built a fleet, launched two brief expeditions into Britain, and bridged the Rhine to raid German territory. His account of these events, De Bello Gallico (The Gallic War), was written in such direct and simple Latin that for centuries it served as a school textbook (Warrington, 1958).

Romans loved conquest, and Caesar became immensely popular. When the Senate demanded that he disband his victorious army, on 10 January 49 BCE Caesar “crossed the Rubicon” (a small stream that formed the boundary between Italy and Cisalpine Gaul), initiating a civil war.

To pay his legions (and settle his enormous debts) Caesar seized the Roman treasury’s stockpiled silver and issued an estimated 22.5 million denarii bearing his own name. The symbolism of these “elephant” coins–as well as which side is actually the obverse–has long been debated (Nousek, 2008). On one side, an African elephant tramples a dragon. The “dragon” is probably a carnyx, a large bronze war trumpet used by Gallic tribes. The other side of the coin shows a ladle (cullulus), a holy water sprinkler (aspergillum), a sacrificial axe adorned with a wolf’s head (securis) and an apex (a peculiar hat with a top spike and ear flaps). These ritual implements were emblems of the Pontifex Maximus, the high priest of the Roman state religion. Caesar had been elected to this prestigious office in 63 BCE.

For the next four years, Caesar pursued his enemies across the Mediterranean world, accompanied by his legions and a mobile military mint. In North Africa, his coins depict his divine ancestor Venus and one of his mythical human ancestors, Aeneas, a refugee from the Trojan War who fled the burning city carrying both his father and a precious wooden idol of Pallas Athena (Minerva to Romans) on his back[3].

Coins struck for Caesar in Spain have Venus on the obverse, with a reverse depicting bound Gallic captives beside a “trophy” (an elaborately mounted display of captured weapons and armor).

A type likely struck in Sicily in 46 BCE dispenses with Caesar’s name entirely and simply abbreviates his titles — Consul for the third time, Dictator for the second time, high priest, and Augur. Augurs were another class of priests who observed the flight of birds to determine the will of the gods. Any important public decision in Rome required an augur’s ritual participation. The augur’s emblems were the lituus (a spiral wand) and a jug for pouring offerings (Stewart, 1997).

On 9 August 48 BCE, Caesar won the decisive battle of the civil war at Pharsalus in the Greek region of Thessaly. Although operations against die-hard opponents would drag on for years, Caesar now consolidated his power, being elected as consul (normally a one-year term) in 48, 46, 45, and 44 (the Senate waived the traditional requirement that a consul had to wait 10 years between terms). Caesar was also granted the title of Dictator in 49, 48-47, and 46-44. This was a grant by the Senate of special powers to one man for a limited period, normally six months, to deal with an emergency that threatened the state. When Caesar received the unprecedented title of “Dictator in Perpetuity” (DICT PERPETUO on the coinage) early in 44 BCE, conservative Romans were horrified.

To meet the Republic’s urgent need for cash, Caesar resumed coinage of gold, which had not been struck by Rome since the dictatorship of Sulla (82-81 BCE). Most of Caesar’s aurei (about eight grams) are crude in design and workmanship, with the head of a goddess on the obverse and priestly implements on the reverse.

Like modern Americans, ancient Romans felt that portraits of living people shouldn’t appear on their coinage. Only one Roman, Titus Quinctius Flamininus (c. 229 – 174 BCE), a general who conquered much of Greece, was honored on a rare gold piece struck about 187 BCE possibly at Rome (only about 10 examples are known).

The Greek-speaking cities of the east had no taboo against depicting living people on coins, and when they came under Roman rule the Greeks occasionally struck coins with portraits of Romans. The earliest portrait of Caesar appeared in 47 BCE on a bronze coin of Nikaia in Bithynia, struck under governor C. Vibius Pansa, Caesar’s friend. In 45, the town of Lampsacus in Asia Minor issued a bronze with Caesar’s image. Neither of these rare coins bore Caesar’s name or titles, however.

In January 44, the moneyer C. Mettius placed Caesar’s portrait on silver denarii issued for his fourth dictatorship at Rome. The reverse shows the armed goddess Juno driving a war chariot. During the next few months, a number of additional types show variations on this portrait, culminating in a final issue bearing the title “Dictator for life” and showing Caesar with his head ritually covered, in the manner of a priest conducting a sacrifice.

For many elite Romans, the idea of “Dictator for life” was simply unacceptable. A group of Senators stabbed Caesar to death on 15 March 44 BCE (the “Ides of March”). This precipitated a civil war between Caesar’s supporters and his assassins that persisted until Octavian’s decisive victory at the Battle of Actium (2 September 31 BCE).

Brutus stamped upon the coins which were being minted his own likeness and a cap and two daggers, indicating by this and by the inscription that he and Cassius had liberated the fatherland.

Ironically, the assassins who had been so offended by a portrait of Caesar on coins were soon paying their legions with coins bearing their own portraits. The most famous of these is the “EID MAR” denarius of Marcus Junius Brutus. Issued by a military mint with the army of the assassins somewhere in Greece, shortly before the Battle of Philippi (October 42 BCE), only about 80 authentic examples of this type are known. The last example sold at auction (NAC 92 Part 1, Lot 431, 23 May 2016) went for over $400,000 USD.

Oddly enough only one bronze type in the name of Caesar was issued at Rome during his lifetime. The obverse bears a bust of the goddess Victoria; the reverse depicts Minerva as a war goddess striking at a serpent. An exceptionally well-struck example with beautiful surfaces sold for over $3,800 in a June 2016 European auction[5]. Most collectable coins of Caesar are in silver or gold. There are no gold portrait coins from Caesar’s lifetime, but he appears on numerous posthumous issues.

The elephant denarius is probably the most affordable coin in Caesar’s name issued during his lifetime. Well-worn examples struck off-center can be found for under $300. Very high-grade examples bring over $2,000. Caesar lifetime portrait coins have always been in strong demand from collectors, and prices in recent auctions have ranged from under $3,000 to a whopping $55,000, with an average of around $10,000.

[1] The corona civica was a simple wreath of oak leaves. The only higher award was the corona graminea (“Crown of grass”) awarded for saving an entire army.

[3] This myth would have been familiar to all Romans. A generation later, the poet Vergil developed it into a national epic, The Aeneid.