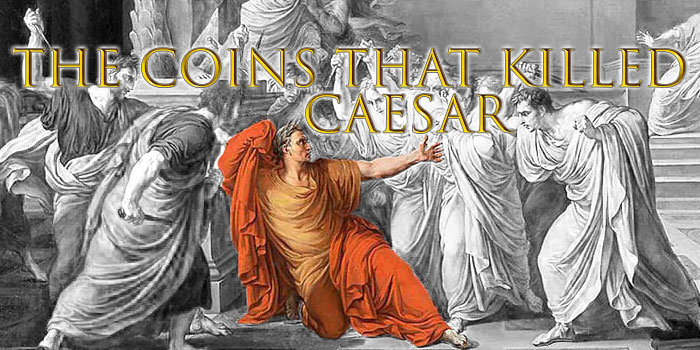 The year 45 BCE ended with Gaius Julius Caesar being the most powerful man in the most powerful country in the world. He had defeated all of his enemies and rivals and had reconciled (or so he thought) any who still survived. The Roman Senate had appointed him Dictator three times–most recently in 46 BCE for a term of 10 years (under the Roman Republic, a Dictator was not supposed to hold power for more than six months)–and they had awarded him an unprecedented four triumphs for his military victories (he awarded himself a fifth for his victory over the conservative forces of Pompey the Great). He was the Pontifex Maximus, the chief priest of the Roman state religion, and he was about to begin his fifth consulship (his third year in a row as consul).

More was yet to come. In January 44, the Senate renewed Caesar’s appointment as Dictator, and in February the Senate decreed that Caesar would serve as Dictator “for life”.

Also in January, the Senate decreed that Caesar’s portrait would appear on the obverses of Rome’s coins. This was unprecedented, as no Roman had ever before been portrayed on a Roman coin during his lifetime. This last “honor” led directly to Caesar’s murder two months later, on the Ides of March.

The First of the Coins That Killed Caesar

The first of Caesar’s portrait coins identifies him as Dictator Quartum (“Dictator for the fourth time”), indicating that it was struck before he became Dictator for Life. The lituus behind his head is an instrument of divination that signifies Caesar’s priesthood. The coin’s reverse features Juno Sospita; Marcus Mettius, the mint magistrate who struck the coin, was originally from the town of Lanuvium, where Juno Sospita was especially worshipped.

This denarius was the first trigger of the assassination plot against Caesar. While it had been customary for Greek kings to portray themselves on their coins, Rome was a Republic, and traditionalists in the Senate like Marcus Junius Brutus despised anything smacking of “monarchy”. Brutus himself claimed descent and took political inspiration from Lucius Junius Brutus, the man who led the revolt that overthrew the last of the Roman kings in 509 BCE and established the Republic, and also the man who ordered the execution of his own son when his son joined a conspiracy to restore the monarchy.

For Brutus and his fellow Republicans, worse was to come.

The Second of the Coins That Killed Caesar

Mettius struck a second denarius portraying Caesar, this time identifying Caesar as Imperator. This was a title given to a victorious general by the acclamation of his troops and is the root of the English word “Emperor”. The reverse of the coin depicts the goddess Venus Victrix holding the mini-goddess Victory (Caesar’s family the Julii claimed to be descended from Venus through her mortal son Aeneas).

This claim to divinity, together with the reference to Caesar’s military power, would have further enraged Brutus and the other Republicans.

Another of the Coins That Killed Caesar

The mint magistrate Lucius Aemilius Buca struck a denarius whose design resembles that of Mettius’ second denarius, but in addition to identifying Caesar as Imperator, Buca’s denarius notes Caesar’s title as Pontifex Maximus, abbreviated as PM. The crescent moon behind Caesar’s portrait, between the letters P and M, may have been intended to represent a “New Age” for Rome under Caesar’s leadership.

Another Reason to Kill Caesar

Buca’s next denarius gives Caesar’s title as Dictator Perpetuo, the Senate having extended Caesar’s term as Dictator “for life” sometime around the middle of February 44 BCE. This probably “sealed the deal” for the Republicans, who began plotting Caesar’s assassination in earnest.

The reverse design of this coin conveys multiple meanings. The fasces in the center, without the customary axe within it, represent Libertas (“Liberty”) according to the orator Marcus Tullius Cicero; the axe at the bottom represents Caesar in his role as the Pontifex Maximus who offers sacrifices in the name of the Roman people; the globe symbolizes (world) dominion, something which would have vexed the Republicans; the winged caduceus represents Felicitas (“Happiness” or “Prosperity”), which Caesar’s success brought to Rome; the clasped hands, with the caduceus, represent Pax (“Peace”) and Concordia (“Concord” or “Harmony”). According to the historian Cassius Dio, the Senate “resolved to build a Temple of Concordia Nova, on the ground that it was through [Caesar’s] efforts that they enjoyed peace, and to celebrate an annual festival in her honour.”

Yet Another Reason to Kill Caesar

The moneyer Publius Sepullius Macer struck a denarius using the same basic design as Mettius’ second denarius. He portrays a more aged version of Caesar, with a haggard face and wattled neck. Contemporary sources described Caesar as “less energetic” than earlier in his career, as apparently he was beginning to show his age (he was only 55 at the time, the same age at which his father had died).

The star behind Caesar’s portrait may link with the crescent on Buca’s denarius, signifying the imminence of a “New Age” for Rome.

Doubling Down on Reasons to Kill Caesar

It was customary under the Republic for three men to serve as mint magistrates each year; this may have been an elective office, but there is also evidence indicating that the magistrates were appointed by the Senate. In 44 BCE, Gaius Cossutius Maridianus was appointed (or elected) to join Mettius, Buca, and Macer as a fourth moneyer for the year. His earliest coins identify Caesar as Dictator for Life, suggesting that he became a moneyer a month or so after his colleagues, each of whom struck coins before Caesar was so named.

The reason for a fourth moneyer is unclear, as is the reason for his appointment (or election) separate from the first three. Caesar was planning a major campaign against Parthia at this time and may have thought it necessary to expand the management of the mint from three magistrates to four in order to handle the increased coin production that would be necessary for his campaign.

The coins Maridianus struck before the Ides of March depict Caesar wearing the veil of the Pontifex Maximus. Most of these coins give Caesar’s title as DICT[ATOR] IN PERPETVO; Maridianus is the only moneyer to include the preposition “in” as part of the title.

Collecting the Coins That Killed Caesar

Crawford (1974) provides the best technical treatment of the coins of the Roman Republic generally, and of the coins of 44 BCE in particular. Sear (1998) provides an excellent outline of the coinage of this period while also placing the coins in their historical context. Sear (2000) is an excellent numismatic catalog for the general collector. The Roman historian Suetonius provides a good if gossipy treatment of Julius Caesar’s career and the assassination; he is especially readable in the translation by the English poet and novelist Robert Graves.

The four mint magistrates continued to strike coins bearing Caesar’s portrait after the Ides of March. While some of the posthumous coins can be distinguished from the life issues because their inscriptions reference events that occurred after Caesar’s death, others require a more detailed analysis of the coins themselves. A collector who wishes to obtain a lifetime rather than a posthumous portrait coin of Julius Caesar can generally rely upon the standard catalogs or a knowledgeable and ethical dealer for guidance.

Coins bearing the lifetime portrait of Julius Caesar are easily found: the Roman mint struck massive quantities of the coins during the last two months of Caesar’s life, including several types and varieties not discussed in this article. Unfortunately, the demand for the coins is also massive, so they generally carry hefty price tags. Well-struck, well-preserved specimens routinely bring high four-figure prices (and much more for some types), but careful searching can sometimes result in finding a coin priced in the low four figures.

The coins with the inscription DICT • QVART or variants thereof are generally – if not always – in good style and well struck, while the coins with forms of the inscription DICT • [IN •] PERPETVO are generally – if not always – poorly executed; coins that do not reference Caesar’s dictatorship range from well-executed to carelessly-executed. This is probably due to coin production ramping up quickly during the time between when the DICT • QVART coins were minted and when the Senate formally decreed that Caesar’s Dictatorship would be for life.